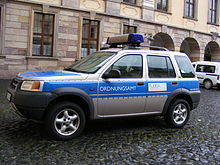 Code enforcement, sometimes encompassing law enforcement, is the act of enforcing a set of rules, principles, or laws (especially written ones) and insuring observance of a system of norms or customs.[citation needed] An authority usually enforces a civil code, a set of rules, or a body of laws and compel those subject to their authority to behave in a certain way. In the United States, those employed in various capacities of code enforcement may be called Code Enforcement Officers, Municipal Regulations Officers, or with various titles depending on their specialization. In Canada and some Commonwealth Countries, the term Bylaw Enforcement Officer is more commonly used, as well as Municipal Law Enforcement Officer or Municipal Enforcement Officer. In the United Kingdom, Australia and New Zealand, various names are used, but the word Warden is commonly used for various classes of non-police enforcement personnel (such as Game Warden, Traffic Warden, Park Warden).

Various persons and organizations ensure compliance with the laws and rules including: