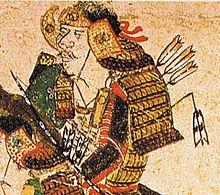 Minamoto no Yoshitomo
In this Japanese name, the family name is "Minamoto".

Minamoto no Yoshitomo (源 義朝?, 1123 – February 11, 1160) was the head of the Minamoto clan and a general of the late Heian period of Japanese history. His son Minamoto no Yoritomo became shogun and founded the Kamakura Shogunate, the first shogunate in the history of Japan.

With the outbreak of the Hōgen Rebellion in 1156, the members of the Minamoto and Taira samurai clans were beckoned into the conflict. Yoshitomo sided along with Taira no Kiyomori in support of the Emperor Go-Shirakawa and Fujiwara no Tadamichi, while his father Minamoto no Tameyoshi, then head of the Minamoto clan, with his young son Minamoto no Tametomo and Taira no Tadamasa sided with the retired Emperor Sutoku and Fujiwara no Yorinaga.

Yoshitomo, defeating his father and the forces of Sutoku and Yorinaga, became head of the Minamoto and established himself as a political power in the capital of Kyoto. However, despite his attempts to have his father pardoned, Tameyoshi was executed. Also, the outcome of the Hōgen rebellion established the Minamoto and Taira as the two strongest political rivals in the country.

Three years later in 1159, Yoshitomo and Fujiwara no Nobuyori placed Go-Shirakawa under house arrest and killed his retainer, the scholar Fujiwara no Michinori in what is called the Heiji Rebellion. Yoshitomo was angry that the Taira had become the favorite of the imperial court after the Hogen Rebellion despite the sacrifice of the Minamoto. Eventually, Taira no Kiyomori in support of Go-Shirakawa, defeated Yoshitomo and killed his two eldest sons and Nobuyori, releasing Go-Shirakawa.

While escaping from Kyoto in Owari Province, Yoshitomo was betrayed and killed by a retainer. His remaining sons Yoritomo along with Minamoto no Yoshitsune and Minamoto no Noriyori were later spared and exiled by Kiyomori.

It is said that Yoshitomo was killed unarmed taking a bath at a hot spring. His grave in Aichi prefecture is surrounded on all sides by wooden swords (bokuto), as by legend his last words were "If only I had even a bokuto...".