Moustache
This article is about the type of facial hair. For other uses, see Moustache (disambiguation). 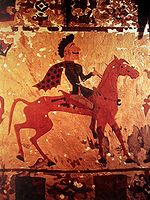 /ˈmʌstæʃ/ or UK /məˈstɑːʃ/; American English: mustache)[1] is facial hair grown on the outer surface of the upper lip. It may or may not be accompanied by a type of beard, a facial hair style grown and cropped to cover most of the lower half of the face.

Shaving with stone razors was technologically possible from Neolithic times, but the oldest portrait showing a shaved man with a moustache is an ancient Iranian (Scythian) horseman from 300 BC.

In Western cultures women generally avoid the growth of facial hair; though some are capable, the majority of these women use some form of depilation to remove it. In rare circumstances, women may choose to embrace this growth, often in the form of thin moustaches. Mexican artist Frida Kahlo famously depicted herself in her artwork with both a moustache and a unibrow. This tradition is followed by some contemporary women in the arts.[5][6][7]

The moustache forms its own stage in the development of facial hair in adolescent males.[8] Facial hair in males normally appears in a specific order during puberty:

As with most human biological processes, this specific order may vary among some individuals depending on one's genetic heritage or environment.[9][10]

Moustaches can be tended through shaving the hair of the chin and cheeks, preventing it from becoming a full beard. A variety of tools have been developed for the care of moustaches, including shaving razors, moustache wax, moustache nets, moustache brushes, moustache combs and moustache scissors. 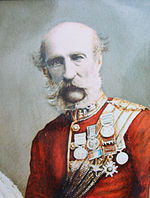 The World Beard and Moustache Championships 2007 had 6 sub-categories for moustaches:[11]

Other types of moustache include: 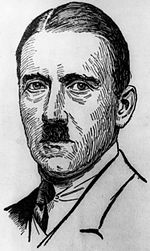 The longest recorded moustache belongs to Bajansinh Juwansinh Gurjar of Ahmedabad, India. It had not been cut for 22 years and was 12 feet, 6 inches long in 2004.[12]

In some cases, the moustaches are so prominently identified with a single individual that it could be identified with him without any further identifying traits, such as in the case of Adolf Hitler. In some cases, such as with Groucho Marx and Charlie Chaplin, the moustache in question was artificial for most of their lives. Kaiser Wilhelm II's moustache, grossly exaggerated, featured prominently in Entente propaganda.

U.S. Air Force ace Robin Olds became celebrated for the flowing handlebar moustache he grew while commanding the 8th Tactical Fighter Wing "Wolfpack" during the Vietnam War, and when forced to shave it by his superior became the source of an Air Force tradition known as "Moustache March".[13]

In art and fiction

Moustache spoon, Sheffield 1904, used in Victorian England to protect the then fashionable moustaches while eating soup

Moustaches have long been used by artists to make characters distinctive as with Charlie Chan, Snidely Whiplash, Hercule Poirot, or the video game character Mario. They have also been used to make a social or political point as with Marcel Duchamp's parody of the Mona Lisa which adds a goatee and moustache or the moustachioed self portraits of Frida Kahlo. At least one fictional moustache has been so notable that a whole style has been named after it: the Fu Manchu moustache.

Salvador Dalí published a book dedicated solely to his moustache.[14]

Moustache was the alias name of a French comic actor.[15]

The Liverpool sides of the late 1970s to late 1980s were famously notable for numbers of moustachioed players, including Mark Lawrenson, Graeme Souness, Bruce Grobbelaar, Terry McDermott and Ian Rush.

In the early 1970s, Major League Baseball players seldom wore facial hair. As detailed in the book Mustache Gang, Oakland Athletics owner Charlie Finley decided to hold a moustache-growing contest within his team. When the A's faced the Cincinnati Reds, whose team rules forbade facial hair[citation needed], in the 1972 World Series, the series was dubbed by media as "the hairs vs. the squares".

Swimmer Mark Spitz won seven gold medals while sporting a moustache when swimmers usually shaved all their body hair to decrease drag. When other competitors questioned the moustache and the potential increased drag, he claimed that it helped create a pocket of air to breathe.[citation needed]

South African rugby union coach Peter De Villiers also has a moustache, and is derisively known as Piet Snor (Peter Moustache). In 2008 De Villiers was nicknamed "Twakkie" in a public competition held by the South African Sunday Times newspaper - this in reference to a local fictional character with a similar moustache from the SABC's "The Most Amazing Show".

NHL player George Parros is well known for his moustache, of which fans can buy replicas of at the team store, with proceeds going to charity. Parros also has a line of apparel called "Stache Gear" that benefits The Garth Brooks Teammates For Kids Foundation.

Steven Cozza, a professional cyclist from the United States, has found much love from European cycling fans for his horseshoe mustache[citation needed]; facial hair is unusual in the professional peloton. 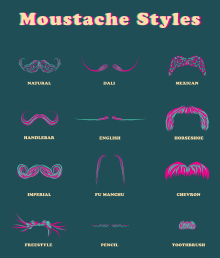