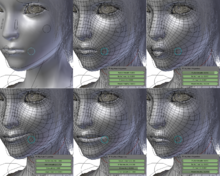 In this example from the open source project Sintel, four facial expressions have been defined as deformations of the face geometry. The mouth is then animated by morphing between these deformations. Dozens of similar controllers are used to animate the rest of the face.

An arbitrary object deformed by morphing between defined vertex positions.

The "morph target" is a deformed version of a shape. When applied to a human face, for example, the head is first modelled with a neutral expression and a "target deformation" is then created for each other expression. When the face is being animated, the animator can then smoothly morph (or "blend") between the base shape and one or several morph targets. [2] Typical examples of morph targets used in facial animation is a smiling mouth, a closed eye, and a raised eyebrow, but the technique can also be used to morph between, for example, Dr Jekyll and Mr Hyde.

When used for facial animation, these morph target are often referred to as "key poses". The interpolations between key poses when an animation is being rendered, are typically small and simple transformations of movement, rotation, and scale performed by the 3D software. [1]

There are advantages to using morph target animation over skeletal animation. The artist has more control over the movements because he or she can define the individual positions of the vertices within a keyframe, rather than being constrained by skeletons. This can be useful for animating cloth, skin, and facial expressions because it can be difficult to conform those things to the bones that are required for skeletal animation.

However, there are also disadvantages. Vertex animation is usually a lot more labour-intensive than skeletal animation because every vertex position must be manually manipulated and, for this reason, the number of pre-made target morphs is typically limited. [1] Also, in methods of rendering where vertices move from position to position during in-between frames, a distortion is created that does not happen when using skeletal animation. This is described by critics of the technique as looking "shaky". On the other hand, this distortion may be part of the desired "look".