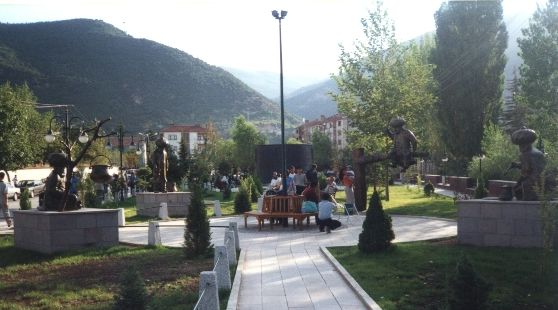 Akşehir is a town and district of in the Central Anatolia region of . According to 2000 census, population of the district is 114,918 of which 60,226 live in the town of Akşehir.

The town is situated at the edge of a fertile plain, on the north side of the .

Philomelion was probably a Pergamenian foundation on the great Graeco-Roman Highway from to the east, and to its townsmen the Smyrniotes wrote the letter that describes the of . , on his way to , dated some of his extant correspondence there; and the place played a considerable part in the frontier wars between the Byzantine emperors and the . It became an important Seljuk town, and late in the passed into Ottoman hands. There Bayezid Yilderim is said by Ali of Yezd to have died after his defeat at .

The town's landmarks include the alleged tomb of , the house used as headquarters by the during the last phase of the , other monuments and old Turkish houses.

Between - each year, commemorations with concerts and other social activities are held to the memory of Akşehir's famous resident that was .

With its rich architectural heritage, Akşehir is a member of the -based . [cite web|url=http://www.historic-towns.org/documents/members/turkey.doc|title=Historic Towns of Turkey|accessdate=2008-03-22|author=The European Association of Historic Towns and Regions|language=English|format=DOC]