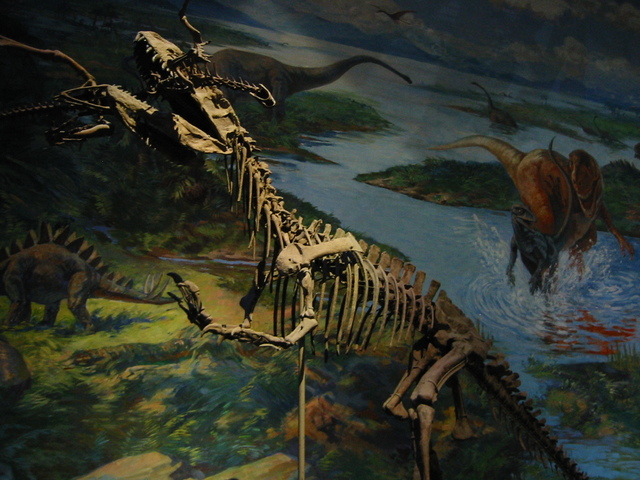 "Sinraptor" is a of from the Late . The name "Sinraptor" comes from the Latin prefix "Sino", meaning Chinese, and "Raptor" meaning thief. The specific name "dongi" honours . Despite its name, "Sinraptor" is not related to s (often nicknamed "raptors") like "".

Uncovered by and Xian Zhao during a joint Chinese/Canadian expedition to the northwestern Chinese desert in 1987. Standing nearly 3 meters tall (10 ft) and measuring roughly 7.6 meters (25 ft) in length, two species of "Sinraptor" have been named. "S. dongi", the , was described by Currie and Zhao in 1994. A second species, originally named " hepingensis" by Gao in 1992, may actually represent a second species of "Sinraptor". Whether or not this is the case, "Sinraptor" and "Yangchuanosaurus" were close relatives, and are classified together in the family .

* The skeleton of "Sinraptor hepingensis" (formerly referred to "") is on display at the Zigong Dinosaur Museum, , China.
* The Dinosaurs of China exhibit is on display at the Miami Museum of Science in Miami Florida. The Chinese museum has allowed the Sinraptor skeleton to visit North America in this display.