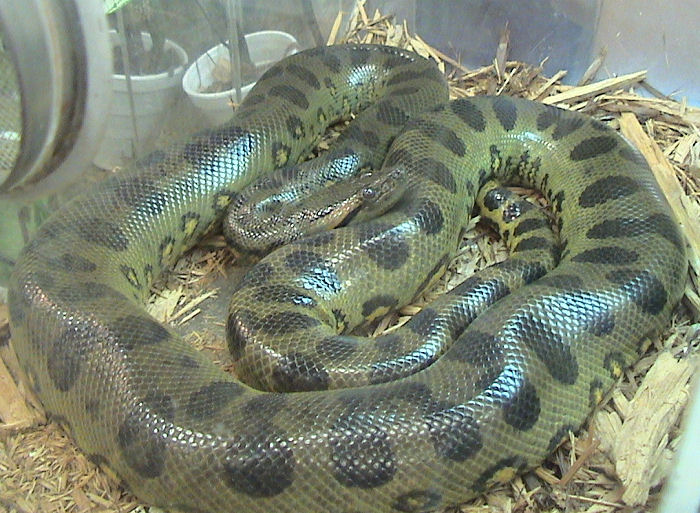 "Eunectes" is a of non-venomous boas found in tropical , commonly called anacondas. An aquatic group of snakes inhabiting swamps and rivers, its members include some of the largest snakes in the world. Despite this, little was known about them until recently. The name "Eunectes" is derived from the Greek word Eυνήκτης, which means "good swimmer." Three are currently recognized.

There are some debates about the maximum size of these snakes. Mehrtens (1987) states that the average adult length for the green anaconda, "E. murinus", is convert|18|to(-)|20|ft|m, with ft to m|25 specimens being very rare. He sets a more conservative maximum at ft to m|23. Estimates of convert|35|to(-)|40|ft|m (see ) are based on vague data and should be regarded with caution.

The has, since the early 20th century, offered a large cash reward (currently worth US$50,000) for live delivery of any snake of ft to m|30 or more in length. This prize has never been claimed.

A possible origin for the common is perhaps an alteration of the Sinhalese word henakandaya, meaning 'whip snake' or "anaconda" is the Tamil "anaikondran", meaning "elephant killer", or "anaikkonda", meaning "having killed an elephant". A name first used in English to name a Ceylonese python, it erroneously was applied to a large South American boa, called in Brazil "sucuri". The word is of uncertain origin, and no snake name like it now is found in Sinhalese or Tamil. Another suggestion is that it represents Tamil. It is unclear how this name originated so far from the snake's native habitat; possibly this is due to its vague similarity to the large n pythons.

The Yellow Anaconda (Eunectes Notaeus) were studied in regularly flooded areas in the Pantanal region of southwestern Brazil. The data directly observed from predatory instances, analysis and examination of gut and waste contents, and affirmations of local residents and other researchers indicate the snake to be not only carnivorous but also a generalist (one who has well understanding and proficiency that can be applied to a field). The prey list analyzed and other evidences support that the E. notaeus employs both "ambush predation" and "wide-foraging" strategies, meaning that it will eat the dead and alive. Yellow Anacondas claim to forage predominately in open, flooded habitats, in relatively shallow water; most predation instances occur from June to November, when flooded areas noticeably dry out. Wading birds, at the proper times, are the most common prey selection for this hungry reptile. Yellow Anacondas also tend to prey on fish, turtles, small-sized caimans, lizards, bird eggs, small mammals and fish carrion. This extremely large prey to predator weight ratio indicates its prey has a much lower weight than those known for other types of boids (the family of non-venomous, constriction snakes). [ cite journal|title=Feeding habits of the yellow anaconda, Eunectes notaeus Cope, 1862, in the Brazilian Pantanal|journal=Biociencias|date=1997-06|first=C|last=Strussmann|volume=5|issue=1|pages=35-52.|url=http://md1.csa.com/partners/viewrecord.php?requester=gs&collection=ENV&recid=4295289&q=anaconda+the+snake&uid=793163738&setcookie=yes|accessdate=2008-10-06 ]

The green anaconda, however, is carnivorous, and will prey on any vertebrate within reach and swallow it. It is especially interested in other snakes, amphibians, fish, and mammals such as capybara. The smaller side of the species have been known to climb trees to attack and consume bird nests, while the larger of the specimens may, and usually do, prey on small deer, caimans, and peccaries. Few records show that there have been attacks on humans. However, no known deaths have been recorded. As all other snakes do, the green anaconda swallows its victim whole and, because their jaws are unhingeable, they are able to swallow prey with a diameter larger than that of their mouths. Green anacondas usually swallow prey "head-first", from the fact that this is the usual way the limbs tend to fold over. The mouth muscles of the snake then contract in waves as swallowing process continues, crushing its prey with each surge forward. Their digestive system is slow-acting, meaning it usually takes either days or weeks to digest the food. After every meal, anacondas might not eat for a while: weeks or months. [cite news | first=Adil | last=Soomro | coauthors= | title=Eunectes murinus | date=2001 | publisher=The University of Michigan Museum of Zoology | url =http://animaldiversity.ummz.umich.edu/site/accounts/information/Eunectes_murinus.html | work =Animal Divesity Web | pages = | accessdate = 2008-10-10 | language = ]

As all snakes do, green anacondas sexually reproduce meaning they have internal fertilization. Such a courtship, in many cases, lasts over a time period of several months. This mating period usually lasts from April to May. The female is typically assumed to lay down a trail of pheromone, which unconditionally attracts the male anaconda toward her. If that does not occur another possibility might be that the female herself releases a type of an air-born chemical indication. Such a signal is also emitted to attract the male toward her. This process is thoroughly supported by the simple observation of the mating female noticably immobie, yet multiple males gather and retreat toward her from all directions. The male anacondas also frequently "lick" the air in order to fully recognize chemical signals signaling the presence of the female.

Although it does not appear that it is necessary for there to be more than one male, quite frequently the snakes tend to grouping in a breeding ball. This "breeding ball" could potentially consist of up to twelve males wrapped around one female snake. The group could stay in this position from two to four weeks. This ball seems to be a type of a slow-motion wrestling match between the males; each one fighting for the right to mate with the female. The strongest and largest, of couse, often becomes victorious. However, the female anaconda, naturally physically much larger and stronger, may herself choose or deflect certain males. Courtship and copulation frequently take place in water. The gestation period for the green anaconda is about 6 months. A gravid female may feed during this period. However, males kept together during breeding season may refuse food.

This species is viviparous, giving birth to live young. A female anaconda can give birth to as many as a hundred young, though typically the size of the litter ranges from 20 to 40. The female may lose up to half of her pre-birthing weight after birth. The neonates are usually around 70-80 cm long at birth. Because of their small size they often fall prey to other animals. They grow rapidly until they reach sexual maturity in their first few years, after which their rate of growth continues at a slower pace. [cite news | first=Adil | last=Soomro | coauthors= | title=Eunectes murinus | date=2001 | publisher=Animal Diversity Web | url =http://animaldiversity.ummz.umich.edu/site/accounts/information/Eunectes_murinus.html | work =The University of Michigan Museum of Zoology | pages = | accessdate = 2008-10-10 | language = ]