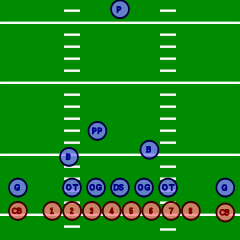 Diagram of a punt formation, the long snapper or deep snapper is indicated by the blue "DS"

In the punt formation, the long snapper or deep snapper is the center of the interior line (#58 in blue)

In American football and Canadian football, the term long snapper refers to a player who is a specialized center during punts, field goals, and extra point attempts. His job is to snap the ball as quickly and accurately as possible.

During field goals and point after touchdown, the snap is received by the holder. During punt plays the snap is delivered to the punter. A good, consistent long snapper is hard to find, and many marginally talented players have found a niche exclusively as long snappers.

A "bad snap" is an off-target snap which causes the delay of a kick or the failure of a play.

The long snapper still performs the normal tasks of a center and also runs downfield after the ball has been punted to help defend the punt return.

Many teams, especially in college football, refer to the snapper in a punt formation as a deep snapper and reserve the term long snapper for the snapper in a field goal formation. Scholarships for long snappers used to be rare, but are becoming more popular as colleges begin to recognize the importance of special teams.

Before specialization, the long snapper was often a player who primarily played another position. A recent example would be Allen Aldridge, who started at linebacker for the Detroit Lions and also served as the team's long snapper [1]. This allowed the team to dress another non-specialist player.

In the NFL long snappers are usually amongst the least known players because of their highly specialized and not very visible role on the field. They are also in general not drafted and normally are acquired as undrafted free agents. Ryan Pontbriand of the Cleveland Browns has the distinction of being the highest-drafted long snapper in the history of the NFL Draft. He was drafted in the fifth round (142nd overall) of the 2003 NFL Draft by the Browns.[2] Zak DeOssie, long snapper for the New York Giants, was drafted in the fourth round (116th overall) of the 2007 NFL Draft; however at the time he was drafted as a linebacker. Todd Thomas was selected in the fifth round (124th overall) of the 1981 NFL Draft, for his long snapping abilities, by the Kansas City Chiefs.[3] At the time draft records listed him as a tackle, but he served as the long snapper for the Chiefs during the 1981 season.[4]

Despite their anonymity, a team lacking a skilled long snapper can be seriously undermined. A famous example of this was on January 5, 2003 during the 2002 wild card playoff game between the San Francisco 49ers and New York Giants. The Giants during the regular season had suffered missed field goals due to the lack of an experienced long snapper, and signed Trey Junkin out of retirement to be the snapper for the playoff game. Junkin botched a snap on a field goal attempt that could have won the game for the Giants, who had led 38-14 at one point in the game.[5] Brad St. Louis of the Cincinnati Bengals was another long snapper who, besides having already misexecuted two snaps in clutch situations in 2005 (wild card play-off game against the eventual champions Pittsburgh Steelers) and 2006, gained even bigger notoriety in 2009, when he delivered five bad snaps on either field goal or extra point attempts (leading to missed, aborted or blocked kicks) in the first five games of the season, which led to the then ten-year veteran being released from the team.