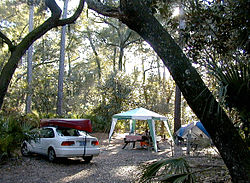 A campsite at Hunting Island State Park in South Carolina 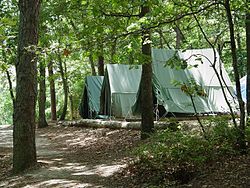 Semi-permanent tents on wooden platforms at a scout camp 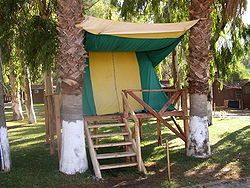 A campsite on Ölüdeniz beach 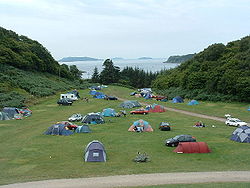 A campsite or camping pitch is a place used for overnight stay in the outdoors. In British English a campsite is an area, usually divided into a number of pitches, where people can camp overnight using tents or camper vans or caravans; this British English use of the word is synonymous with the American English expression campground. In American English the term campsite generally means an area where an individual, family, group, or military unit can pitch a tent or parks a camper; a campground may contain many campsites.

There are two types of campsites:

The term camp comes from the Latin word campus, meaning "field". Therefore, a campgrounds consists typically of open pieces of ground where a camper can pitch a tent or park a camper. More specifically a campsite is a dedicated area set aside for camping and for which often a user fee is charged. Campsites typically feature a few (but sometimes no) improvements.

Dedicated campsites, known as Campgrounds, usually have some amenities. Common amenities include, listed roughly in order from most to least common:

Campgrounds may include further amenities:

Camping outside a designated campsite may be forbidden by law. It is thought to be a nuisance, harmful to the environment, and is often associated with vagrancy. However some countries have specific laws and/or regulations allowing camping on public lands (see Freedom to roam). In the United States, many national and state parks have dedicated campsites and sometimes also allow impromptu backcountry camping by visitors. U.S. National Forests often have established campsites, but generally allow camping anywhere, except within a certain distance of water sources. In Britain, it is more commonly known as wild camping, and is mostly illegal. However, Scotland has a relaxed view and wild camping is legal in the majority of Scotland.

In North America many campgrounds have facilities for Recreational Vehicles and are also known as RV parks.[1] Similar facilities in the UK are known as Caravan Parks. The Kampgrounds of America (KOA) is a large chain of commercial campgrounds located throughout the United States and Canada. Many travellers prefer to use KOA, or similar campsites, as an alternative to hotels or motels.

Both commercial and governmental campgrounds typically charge a nominal fee for the privilege of camping there, to cover expenses, and in the case of an independent campground, to make a profit. However, there are many in North America that do not charge a use fee [2] and rely on sources such as donations and tax dollars.

Frequently confused with campsites, campgrounds and RV parks, trailer parks are made up of long term or semi-permanent residents occupying mobile homes, park trailers or RVs.

A caravan park at Beer, in South Devon, England

The holiday park is a United Kingdom version of the North American trailer park. Created to allow coastal resorts to enable temporary and high-income accommodation to be easily created, under UK planning laws, no residents are permanent, and the park must be wholly shut to all for at least two months each year. All of the mobile homes are either available for rent from the land owner, or pitches are leased on a long-term basis from the land owner and the lease's own mobile home placed on the pitch. Permanent sites owners lease includes the provision by the land owner of water, sewerage and general site and grounds maintenance. Some holiday parks includes a small campsite for those touring the area, where they can pay to pitch tents or site touring caravans and motorhomes. Touring campsites have full access to the Holiday parks facilities, including clothes washing and showering. Most holiday parks include a central entertainments block, which can include a shop, restaurants, and a multi-purpose theatre used for both stage and activity-based entertainment. 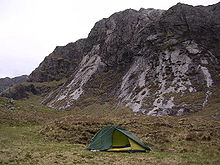 In the U.S., backcountry camping is common in large undeveloped protected areas. These areas can only be reached on foot, bicycle, canoe or on horseback. The camping areas are usually established campsites or "zones", which have a predetermined maximum number of persons that are allowed to stay in the section per night. Strict regulations are imposed regarding food storage and resource protection. In most cases, open fires are not permitted and all cooking must be done with small portable stoves. Usually in organized parks or wilderness areas, backcountry campsites require a free permit obtainable at visitor centers and ranger stations. Dispersed camping in other areas may not require a permit.