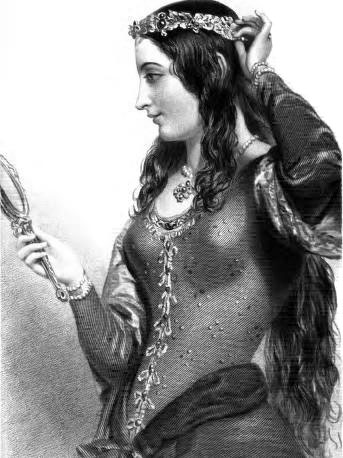 Born in , she was the daughter of (1198-1245) and (1206–1266), the daughter of Tomasso, Count of Savoy and his second wife . All four of their daughters became queens. Like her mother, grandmother, and sisters, Eleanor was renowned for her beauty.fact|date=June 2007 Eleanor was probably born in 1223; describes her as being "jamque duodennem" (already twelve) when she arrived in the for her marriage.

Eleanor seems to have been especially devoted to her eldest son, Edward; when he was deathly ill in 1246, she stayed with him at the abbey at Beaulieu for three weeks, long past the time allowed by monastic rules.fact|date=June 2007 It was because of her influence that King Henry granted the duchy of Gascony to Edward in 1249.fact|date=June 2007 Her youngest child, Katharine, seems to have had a degenerative disease that rendered her deaf. When she died aged three, both her royal parents suffered overwhelming grief.fact|date=June 2007

She was a confident consort to Henry, but she brought in her retinue a large number of cousins, "the Savoyards," and her influence with the King and her unpopularity with the English barons created friction during Henry's reign.fact|date=June 2007 Eleanor was devoted to her husband's cause, stoutly contested Simon de Montfort, raising troops in France for Henry's cause. On July 13, 1263, she was sailing down the on a barge when her barge was attacked by citizens of London. In fear for her life, Eleanor was rescued by , the mayor of London, and took refuge at the bishop of London's home.

In 1272 Henry died, and her son Edward, 33 years old, became Edward I, King of England. She stayed on in England as , and raised several of her grandchildren -- Edward's son Henry and daughter Eleanor, and Beatrice's son John. When her grandson Henry died in her care in 1274, Eleanor mourned him and his heart was buried at the priory at she founded in his memory. Eleanor retired to a convent but remained in touch with her son and her sister, Marguerite.