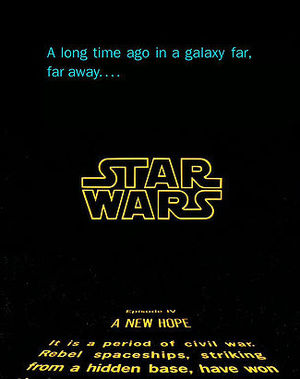 The three components of the opening sequence: the phrase "A long time ago in a galaxy far, far away....", the Star Wars logo and the opening crawl, from the beginning of Star Wars Episode IV: A New Hope.

Each film in the Star Wars series opens with a crawl (also known as a roll-up) of text which provides an explanation of the backstory and context of the film. The crawl has become associated with the films and has frequently been parodied.

The opening of each film begins with the text "A long time ago in a galaxy far, far away...." in blue, followed by the Star Wars logo over a field of stars. The logo then moves away from the camera and subsequently, the crawl begins with film's episode number and subtitle (with the exception of original release of Star Wars – see below) followed by a three-paragraph summary of the events immediately prior to the incidents of the film. Scrolling from the bottom of the screen towards a vanishing point at the horizontal center and above the vertical center of the screen in a perspective projection. Each crawl ends with a four-dot ellipsis, except for Return of the Jedi which has a three-dot ellipsis. When the crawl has nearly reached the vanishing point, the crawl is faded out, and the camera tilts down through space to a ship or planet.[1] Episode II: Attack of the Clones is the only film where the camera tilts up after the crawl.

Two typefaces are used in the crawls, both in yellow: News Gothic for the episode number and main body of the crawl, and Univers for the title of the film.[citation needed] Several words are in all-capital letters to stress their importance: "DEATH STAR" in A New Hope, "GALACTIC EMPIRE" in Return of the Jedi, and "ARMY OF THE REPUBLIC" in Attack of the Clones. Each line of the crawl spans the width of the screen when it enters from the bottom. In the fullscreen versions of the films, the full lines of text are cut off on the sides until they have scrolled further onto the screen.

The animated Star Wars: The Clone Wars is the only theatrically released film not to feature an opening crawl, but instead feature a narration of the past events over several clips.

Lucas has stated that the opening crawl was inspired by the opening crawls used at the beginning of each episode of the original Flash Gordon film serial, which was the inspiration for Lucas to write much of the Star Wars saga.[2]

In a 2005 interview, George Lucas described how the final phrasing of the text for A New Hope came about. "The crawl is such a hard thing because you have to be careful that you're not using too many words that people don't understand. It's like a poem. I showed the very first crawl to a bunch of friends of mine in the 1970s. It went on for six paragraphs with four sentences each. Brian De Palma was there...". De Palma helped to edit the text into the form used in the film.[3]

According to Dennis Muren, who worked on all six films, crawls on the "original trilogy" films were accomplished by filming physical models laid out on the floor. The models were approximately two feet wide and six feet long. The crawl effect was accomplished by the camera moving longitudinally along the model. It was difficult and time-consuming to achieve a smooth scrolling effect. Furthermore, different versions in other languages (such as German, French and Spanish) were produced by ILM. [1][4]

With the advent of computer-generated graphics, the crawls for the "prequel trilogy" films were achieved much more quickly.[1] The 2004 DVD special edition versions of the original trilogy were later updated with computer-generated crawls as part of their restoration and enhancement.

When originally released in 1977, the first film was simply titled Star Wars, as 20th Century Fox forbade Lucas to use a subtitle because it could be confusing, since there had been no other Star Wars movies prior to 1977.[1][4] In addition, it was not certain if the film would be followed with a sequel. When The Empire Strikes Back was released in 1980, the subtitle "Episode V" appeared above the title card. To match its sequel's crawl, the subtitle "Episode IV: A NEW HOPE" was added for the 1981 re-release of the film where it continued to appear throughout the film's home video releases. The original version, without the subtitle, was not released again until the 2006 limited edition DVDs.