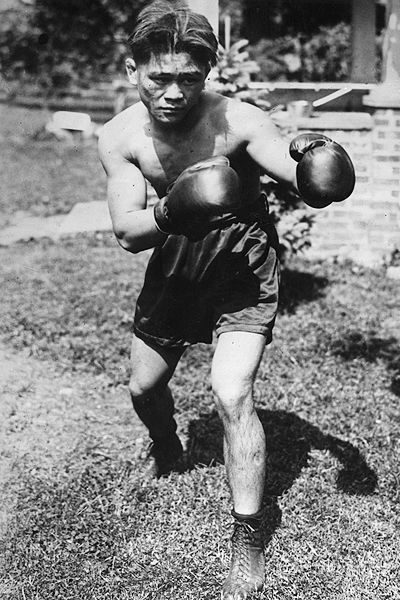 Pancho Villa (, - , ) was the nome de guerre by which the legendary Filipino boxer Francisco Guilledo was best known. Villa, who stood only 5 feet and 1 inch (154 cm.) tall and never weighed more than 114 pounds (51 kgs.), rose from obscurity to win the World Flyweight boxing championship in 1923, earning acclaim in some quarters as "the greatest Asian fighter in boxing history". [ [http://www.ibhof.com/villa.htm Another Villa Profile] ] He was never knocked out in his entire boxing career, which ended with his sudden death at the age of 23 from complications following a tooth extraction.

Guilledo was born in , the son of a cowhand who abandoned his family when Guilledo was just six months old. He grew up in the of a wealthy local, helping his mother raise goats she tended on the farm.

When Guilledo was 11, he sailed to to work as a bootblack. While in Iloilo, he befriended a local boxer, and together they migrated to , settling in . He would occasionally spar with friends, and soon attracted the attention of local boxing habitues. He fought his first professional fight in 1919 against . Within two years, he was the Philippine champion, having dethroned "". He nearly gave up boxing after being spurned by a woman he courted, actually returning to Negros early in 1922 to retire. The clamor of Filipino boxing fans compelled him to return to the ring.

It appears that during this period, Guilledo was under the tutelage of at least two important local boxing figures. One was the American boxing promoter based in Manila . Another was a Filipino executive and boxing manager named . The renaming of Francisco Guilledo to Pancho Villa has been attributed to both men, depending on the source. One version tags Churchill as having renamed Guilledo into Villa, taking the name from the eponymous Mexican guerrilla leader. [ [http://www.ibhof.com/villa.htm IBHOF / Pancho Villa ] at www.ibhof.com] Another version maintains that Paquito Villa had legally adopted Guilledo as early as 1918, renaming him Pancho. [ "Filipinos in History", Volume II, National Historical Institute, pp. 169]

In May, 1922, Villa received an invitation from famed boxing promoter to fight in the . He accepted the invitation, and sailed to America together with Churchill and Paquito Villa. He immediately won his first overseas fight against in on , . He then fought and defeated on , . By this time, Villa had caught the attention of boxing aficionados, and he was slated to fight against the American flyweight champion on , .

Villa defeated Buff in an upset, knocking out the champion in the 11th round to win the American flyweight championship. At this point, Villa had been in the American phase of his career for only 4 months. Villa lost the title early the following year to Genaro, who defeated the Filipino on points in a widely criticized decision. The unpopularity of Villa's defeat on points proved fateful. , the Welsh-born boxer and former world flyweight champion had decided to end his recent retirement and seek the then vacant world flyweight championship in a fight to be staged in America. While Genaro, the US champion, seemed as the logical choice to fight Wilde, Villa's growing popularity soon convinced promoters that the Filipino would prove as the better draw.

Villa did not disappoint. On , , at the in , Villa was cheered on to victory over Wilde by over 20,000 fans screaming "Viva Villa!" The win came by way of a knockout in the 7th round caused by a crashing right to Wilde's jaw. Villa was described as relentless, pummelling Wilde with both hands, and causing the Welshman to also drop in the fourth and fifth rounds. Wilde never fought again.

The new world flyweight champion successfully defended his title several times and never relinquished it until his death just two years later. Villa returned to a hero's welcome in Manila in September 1924, feted with a parade and a reception at Malacañan Palace. He also returned to his old haunts in Iloilo and his hometown in Negros. Before returning to the United States, he fought one more bout in Manila, against , on , . Villa prevailed. None of the thousands of fans who saw that fight at Wallace Field knew that they had just witnessed Villa's final victory, and the second to the last fight of his life.

Villa returned to the United States to prepare for his next match, a non-title fight against scheduled for , , at in Oakland. Days leading to the fight, Villa's face became swollen due to an ulcerated tooth. According to contemporary newspaper accounts, on the morning of the fight, Villa went to a dentist to have the tooth extracted. Despite the pain and swelling, Villa insisted on going ahead with fight with McLarnin. Villa ended up spending most of the fight using one hand to protect his afflicted face. Given these circumstances, Villa naturally lost, though he managed to stay the distance. It was Villa's last fight.

Two or three days after the McLarnin fight, Villa had three more teeth extracted after an infection was discovered. Against his dentist's prescription of bed rest, Villa spent the next few days carousing with friends. Villa's condition worsened thereafter, and by , 1925, he had to be rushed to the hospital. It was then discovered that the infection had spread to Villa's throat, resulting in . Villa was rushed into surgery, but he lapsed into a coma while on the table, and died the following day, , , 17 days before he became 24 years old.

Villa's remains were returned to Manila, and in August 1925, Villa was buried at . He was survived by his wife, Gliceria.

Villa was inducted rather belatedly into the in 1994, the second Filipino boxer so honored after , who was born 7 years after Villa's death. 33 years earlier, in October 1961, Villa was added by to its own boxing hall of fame.

*He was commemorated in two tracks on Sun Kil Moon's acclaimed 2003 album "," an album which seems fixated on themes of memory, past ghosts and those who died before their natural time.

*Villa is also remembered to this day for the unusual, tragic, and rather needless circumstances surrounding his at the young age of 23, while at the height of his boxing career.