Maranhão (Portuguese pronunciation: [maɾɐ̃ˈɲɐ̃w̃][2]) is a northeastern state of Brazil. To the north lies the Atlantic Ocean. Maranhão is neighbored by the (clockwise from east) states of Piauí, Tocantins and Pará. The people of Maranhão have a distinctive accent. Maranhão is described in books such as The Land of the Palm Trees, by Gonçalves Dias, and Casas de Pensão by Aluísio Azevedo.

The dunes of Lençóis are an important area of environmental preservation. Also of interest is the state capital of São Luís, designated a Unesco World Heritage Site. Another important conservation area is the Parnaíba River delta, between the states of Maranhão and Piauí, with its lagoons, desert dunes and deserted beaches or islands, such as the Caju island, which shelters rare birds. 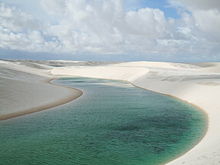 The southern portion of the state belong to the lower terraces of the great Brazilian Highlands, occupied by the Cerrado savannas. Several plateau escarpments, including the Chapada das Mangabeiras, Serra do Tiracambu, and Serra das Alpercatas, mark the state's northern margin and the outlines of river valleys.

The climate is hot, and the year is divided into a wet and dry season, extreme humidity being characteristic of the former. The heat, however, is greatly modified on the coast by the south-east trade winds.

The rivers of the state all flow northward to the Atlantic and a majority of them have navigable channels. The Gurupi River forms the northwestern boundary of the state, separating Maranhão from neighboring Pará, and the Tocantins River forms part the state's southwestern boundary with Tocantins state. The Parnaíba River forms the eastern boundary of Maranhão, but it has one large tributary, the Balsas, entirely within the state. Other rivers in the state include the Turiassu (or Turiaçu) which runs just east of the Gurupi, emptying into the Baía de Turiassu; the Mearim, Pindaré, and Grajaú, which empty into the Baía de São Marcos; and the Itapecuru and Munim which discharge into the Baía de São José. Like the Amazon, the Mearim has a pororoca or tidal bore in its lower channel, which greatly interferes with navigation.

The western coastline has many small indentations, which are usually masked by islands or shoals. The largest of these are the Baía de Turiassu, facing which is São João Island, and the contiguous bays of São Marcos and São José, between which is the large island of São Luís. This indented shoreline is home to the Maranhão mangroves, the tallest mangrove forests in the world. The coastline east of Baía de São José is less indented and characterized by sand dunes, including the stark dune fields of the Lençóis Maranhenses National Park, as well as restinga forests that form on stabilized dunes.

Palace of Lyons at night, in São Luís. 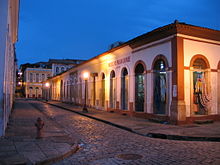 The first known European to explore Maranhão was the Spanish explorer Vicente Yáñez Pinzón in 1500[citation needed], but was granted to João de Barros in 1534 as a Portuguese hereditary captaincy. The first European settlement, however, was made by a French trading expedition under Jacques Riffault, of Dieppe, in 1594, who lost two of his three vessels in the vicinity of São Luís Island, and left a part of his men on that island when he returned home. Subsequently Daniel de La Touche, Seigneur de La Rividière was sent to report on the place, and was then commissioned by the French crown to found a colony on the island; this was done in 1612. The French were expelled by the Portuguese in 1615, and the Dutch held the island from 1641 to 1644. In 1621 Ceara, Maranhão and Pará were united and called the "Estado do Maranhao," which was separated from the southern captaincies. Very successful Indian missions were soon begun by the Jesuits, who were temporarily expelled as a result of a civil war in 1684 for their opposition to the enslavement of the Indians. Ceara was subsequently detached, but the "state" of Maranhao remained separate until 1774, when it again became subject to the colonial administration of Brazil.

Arms of the Marquess of Maranhão (also Earl of Dundonald in Scotland).[3]

Maranhão did not join in the Brazilian declaration of independence of 1822, but in the following year the Portuguese were driven out by British sailor and liberator Admiral Lord Cochrane and it became part of the Empire of Brazil. For this achievement Lord Cochrane became 1st Marques of Maranhão and Governor of the Province of Maranhão.

São Luís is the Brazilian state capital which most closely resembles a Portuguese city. By the early 20th century São Luís has about 30,000 inhabitants, and contained several convents, charitable institutes, the episcopal palace, a fine Carmelite church, and an ecclesiastical seminary. The historic city center was declared a World Heritage Site in 1997.

This State is also known as the land of the palm trees, as the various species of this tree provide its major source of income. The most important of them, from an economic point of view, is the babassu. The agribusiness, the aluminium and alumina transformation industries, and the food and timber industries complement the state economy. 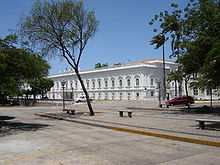 Palace of Lyons in São Luís.

Marechal Cunha Machado International Airport. With a covered area of 8,100 square meters and capacity of up to a million passengers a year, the airport is located 13 kilometers from the city center. In October 2004 it began receiving international flights, in response to a longstanding request from tour operators in the region. The Maranhão State Extraordinary Secretariat of Tourism has been working to attract charter flights from European countries, such as Portugal, Italy, Germany and Spain.

Renato Moreira Airport. Infraero has administered the airport since November 3, 1980. Exactly one year later it was officially opened to traffic. The passenger terminal structure, initially built by COMARA, was modified and expanded in 1998, receiving improvements such as new arrival and departure areas, an expanded main concourse and air conditioning of the entire terminal. This airport is located as Imperatriz city.

The flag of Maranhão was designed by the poet Joaquim de Souza Andrade, and was adopted by decree nr. 6, of December 21, 1889.

The colored strips symbolize the different ethnic groups which make up the population, and their mixing and living together. The white star in the upper left corner symbolizes Maranhão itself, and is supposed to be Beta Scorpii, as the constellation Scorpius is also depicted on the national flag of Brazil. The flag has a ratio of 2:3.