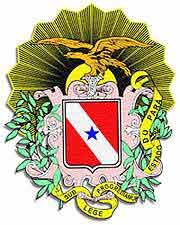 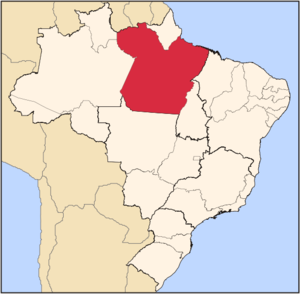 Pará (pronounced|pa.'ɾa) is one of the states of , located in the northern part of the country.

Neighboring states are (clockwise from north) , , Tocantins, , Amazonas and . To the north it borders and . Pará is the second largest state of Brazil in area, second only to Amazonas. (It was the third until broke away from in 1977.) In the northern region, it has the largest population, more than 6 million. Its most famous icons are the and the Amazon rain forest. Well known Amazonian products include: firstly, rubber extracted from the natural rubber tree groves, tropical hardwoods such as , and most recently minerals such as iron ore and . Every October, the capital city, , receives tens of thousands of s for the year's most important religious celebation, the procession of the "Círio de Nazaré." Another important attraction of the capital is the marajó-style ceramics, based on pottery from the extinct Marajó Indian civilization and whose designs have gained international fame.

The Portuguese colonization in Pará State first occurred in , with the foundation of Presépio Fortress – today, Castle Fortress – at Guajará , which originated the of . Before that, the region had been invaded many times by the Dutch and the English, seeking pepper; , a from which a powder is produced and used as a stimulant; and annato seeds, a used for cooking, as a sunscreen and also for dye extraction.

An is a type of in which there is no – all months have mean values of at least 60mm. It is usually found at s within five degrees of the – which are dominated by the . The equatorial climate is denoted "Af" in the .
is the natural vegetation in equatorial regions.

The mining sector represents 14% of the () of the State, originated mainly from the extraction of , , , and , as well as gold, until recently extracted from one of the largest mines of recent history: Serra Pelada. The State of Pará has its economy based also on vegetal extraction, on and cattle raising; thanks to the rich and the important hydrographic basin – s are the main means of in the region. , a tree from which a powder is produced and used as a stimulant; and annato seeds, a used for cooking, as a sunscreen and also for dye extraction. Marajó Island – the biggest fluvial-maritime island in the world, with 50 thousand km2 of extension. Its territory has one of the largest mining areas in the Country, located at Carajás Mountains, a mining province where the Ferro Carajás Project is based, from Companhia . The complex produces 35 million tons of ore a year, exporting the product to many countries, among them , , , and .

The biggest feast in Pará State happens there, Círio de Nazaré (Nazareth Taper). Festivities start on the second Sunday in the month of October and pay homage to Our Lady of Nazareth, patron saint of the State. Organised since 1793, at present it gathers around 1,5 million of followers, who go on a procession through the city on a huge suite to the Nazaré , where the image is worshipped.

Besides all the natural wealth, the State of Pará also shelters a valuable cultural treasure, about 40 indigenous groups, scattered through and area of over 23 million hectares. Of these, more than eight million have been delimited by Funai (National Foundation of the Indian), ensuring security and preservation of that space. Among the biggest communities there are the Andira Marau, Munduruku and the Kayapó.

Since 2001, has been an example of the standard implements at its s. Standing out in the midst of the Amazon vastness, the uses plane curves on its roof to permit light to enter its entire large terminal hall. The Sérgio Parada used his creativity to adopt multiple-use totems integrated with light projectors, a sound system, and s. Currently Belém International Airport serves demand of 2.7 million s a , in a constructed area of 33,255.17 square meters. Traditionally called Val-de-Cans Airport, it is responsible for increasing in the region, as well as for the outflow of products and attracting new investments. The passenger terminal is fully on two levels and has futuristic , designed to take advantage of natural lighting. with special needs have individualized service with own equipment at specific locations to facilitate their circulation. The terminal’s interior is decorated with s native to the and is enclosed by a source able to imitate the sound of the s that fall every day in the region.

of has s, galleries, a small factory, s, artisanship s, regional kiosks, houses, a space for fairs and events, a for 400 spectators and a touristic harbour.

provides visitors and residents with various sport activities. The architectonical project is from August 1969. In 2002, 24 years after the stadium inauguration, was reinaugurated as an Olympic stadium of Pará.

The white stripe in the flag represents the , the and the . The blue star is in the constellation Virgo, which is also depicted on the representing the state. The two red areas symbolize the vigor of the local people.