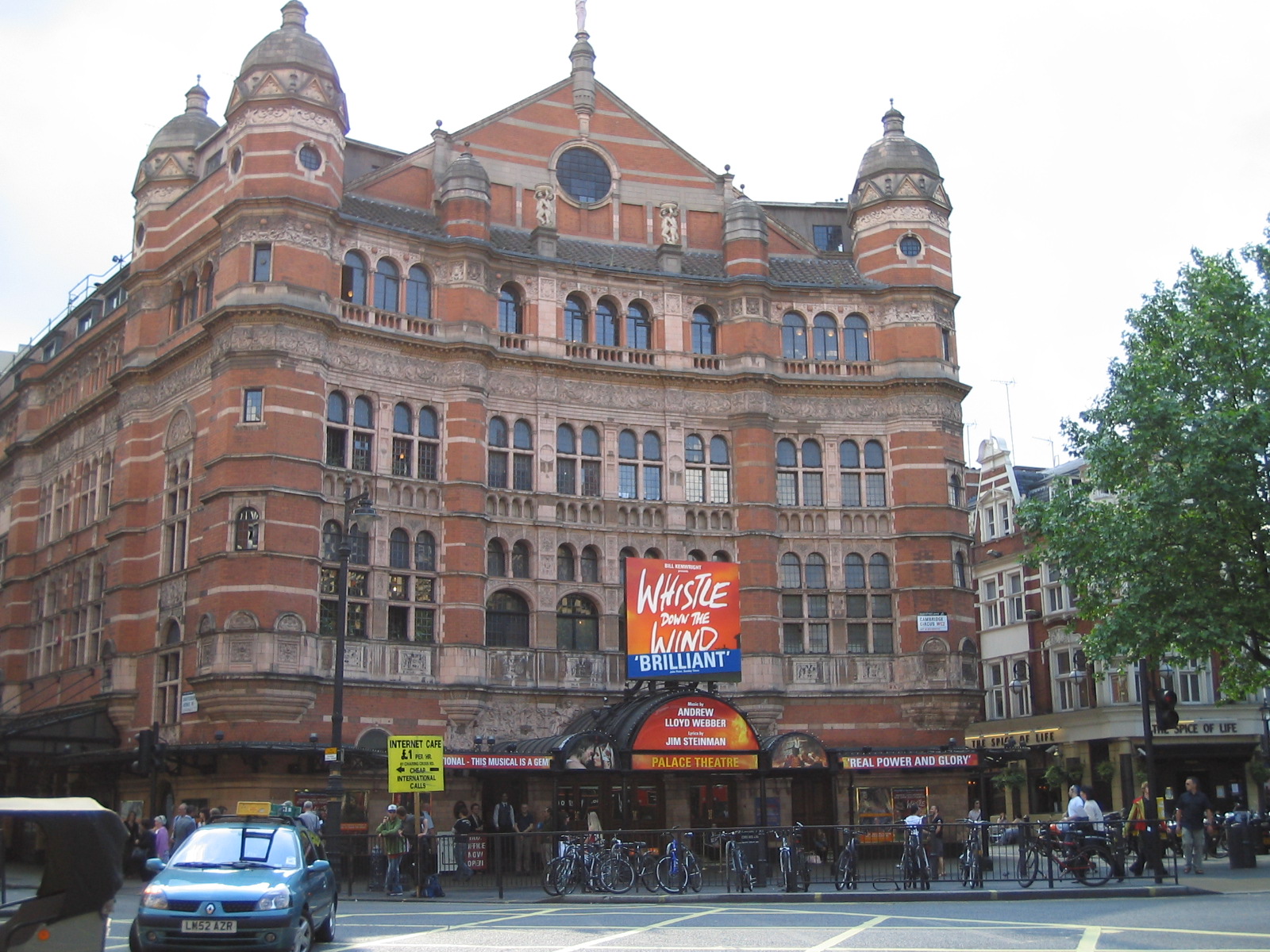 The Palace Theatre, is a in the . It is an imposing red- building that dominates the west side of Cambridge Circus, and is located near the intersection of and . The Palace Theatre's current capacity is 1,400.

Commissioned by impresario in the late 1880s, it was designed by . Carte intended it to be the home of English , much as his had been built as a home for English , beginning with the series. The foundation stone, laid by his wife Helen in 1888, can still be seen on the façade of the theatre, almost at ground level to the right of the entrance. The theatre's design was considered to be novel. The upper levels are supported by heavy steel s built into the back walls, removing the need for supporting pillars that impede the view of the stage. The tiers, corridors, staircases, landings are all constructed of concrete to reduce the risk and damage that might be done by fire. [ [http://www.arthurlloyd.co.uk/Archive/December2005/Page4.htm Arthurlloyd.com feature on the theatre.] ]

The theatre opened as the "Royal English Opera House" in January 1891 with 's "Ivanhoe". No expense was spared to make the production a success, including a double cast and "every imaginable effect of scenic splendour ["Hesketh Pearson, "Gilbert and Sullivan"] . It ran for 160 performances, but when "Ivanhoe" finally closed in July, Carte had no new work to replace it, and the opera house had to close. One opera is not enough to sustain an opera house venture. It was, as critic Hermann Klein observed, "the strangest comingling of success and failure ever chronicled in the history of British lyric enterprise!"

The theatre re-opened in November 1891, with 's "La Basoche" (with in his first London stage performance) at first alternating in repertory with "Ivanhoe", and then "La Basoche" alone, closing in January 1892. Carte had no other works ready, and so he leased the theatre to for a season and sold the opera house within a year at a loss. It was then converted by into a grand, clubby and renamed the Palace Theatre of Varieties, managed by Charles Morton, known as the 'Father of Music Halls', who made it into a successful enterprise. [ [http://www.arthurlloyd.co.uk/Archive/January2005/PageTwo.htm Pages about Morton's management in feature on the theatre] (Arthur Lloyd) accessed ]

In March 1897, the theatre began to screen films from the "American Biograph Company" as part of its programme of entertainment, these films pioneered the 70 mm format which helped give an exceptionally large and clear image filling the . The performances included early s from around the world, many of them made by film pioneer , including film of the (1900). The Palace continued to shows films as part of its variety and musical programmes [ [http://www.victorian-cinema.net/venues.htm Victorian Cinema venues] accessed 21 Jun 2007] .

, and elegant pianist-singer Margaret Cooper. [ [http://www.arthurlloyd.co.uk/Archive/January2005/PageSix.htm Second page about Butt's management in feature on the theatre] ]

The name of the theatre was finally changed to The Palace Theatre in 1911. was musical director at the theatre from 1900 until 1920, [ [http://www.arthurlloyd.co.uk/Archive/January2005/PageSeven.htm Palace Theatre Feature] ] with whose orchestra he made many recordings. The theatre was famous not only for its orchestra, but also for the beautiful Palace Girls, for whom Finck composed many dances. In 1911, the Palace Girls performed a song and dance number, which was originally called "Tonight" but became very popular as a romantic instrumental piece "In The Shadows". In 1912, the theatre hosted a Royal Command Performance. [ [http://www.arthurlloyd.co.uk/Archive/January2005/PageEight.htm Page about the Royal Command Performance] ]

On , the musical comedy "" opened at the Palace Theatre starring and The run of 665 performances made it the third longest running West End musical of the 1920s. The Palace Theatre was also the venue for 's "" (1927) and 's final stage musical "" (1933). Later works that played at the theatre included "", "", "Cabaret", and many others. In the 1960s, "" ran for 2,385 performances, opening on . [ [http://www.arthurlloyd.co.uk/Archive/January2005/PageEleven.htm Thumbnails of programmes from musicals that played at the theatre] ] ".

In August 1983, announced that he had purchased the freehold of the theatre for £1.3 million and subsequently set out on a series of works to restore the theatre. During work on the auditorium, a layer of plum-coloured paint was removed, revealing the famous marble and onyx panels to be untouched. Following the transfer of "" in 2004, the theatre was greatly refurbished and restored, its marble walls uncovered, and new chandeliers installed, among other efforts. This was followed by a short 6-week season of illusionist following his successful UK tour.

's "The Woman in White" received its world premiere on and ran for 19 months to . The show outlived the Broadway production. Bill Kenwright's production of Andrew Lloyd Webber and 's musical "Whistle Down The Wind" played from - . "'s " opened on and is still running at the theatre.