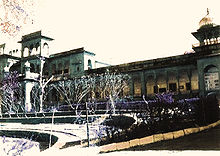 Kesarbagh palace, the mansion of the former ruler of the erstwhile Dholpur State in Dholpur, now Dholpur Military School

The Dholpur State was a kingdom of eastern Rajputana, India, which was founded in AD 1806 by the Bamraulia clan Jat Rana rulers. After 1818 the state was placed under the authority of British India's Rajputana Agency. The Ranas ruled the state until the independence of India in 1947, when the kingdom was merged with the Union of India.

The former chief minister of Rajasthan, Vasundhara Raje, is a member of the erstwhile ruling family of Dholpur.

During the dissensions which followed the death of the Mughal emperor Aurangzeb in 1707, Raja Kalyan Singh Bhadauria obtained possession of Dholpur, and his family retained it until 1761, after which it was taken successively by the Jat Maharaja Suraj Mal of Bharatpur, by Mirza Najaf Khan in 1775, by Scindia in 1782, and in 1803 by the British. It was restored to Sindhia by the Treaty of Sarji Anjangaon, but in consequence of new arrangements was again occupied by the British. Finally, in 1806, the territories of Dholpur, Badi and Rajakhera were handed over to the Maharaj Rana Kirat Singh of Gohad, in exchange for his state of Gohad, which was ceded to Sindhia.

The Maharaj Ranas of Dholpur belong to the clan of Bamraolia Jats. An ancestor of the family appears to have held certain territories at Bamraoli near Agra c. 1195. His descendant in 1505, Singhan Deo, having distinguished himself in an expedition against the freebooters of the Deccan, was rewarded by the sovereignty of the small territory of Gohad, with the title of rana. In 1779 the rana of Gohad joined the British forces against Scindia, under a treaty which stipulated that, at the conclusion of peace between the English and Marathas, all the territories then in his possession should be guaranteed to him, and protected from invasion by Sindhia. This protection was subsequently withdrawn, the rana having been guilty of treachery, and in 1783 Sindhia succeeded in recapturing the fortress of Gwalior, and crushed his Jat opponent by seizing the whole of Gohad. In 1804, however, the family were restored to Gohad by the British government; but, owing to the opposition of Sindhia, the rana agreed in 1805 to exchange Gohad for the territory of Dholpur, which was taken under British protection, the chief binding himself to act in subordinate co-operation with the paramount power, and to refer all disputes with neighboring princes to the British government. After 1818 the state was placed under the authority of British India's Rajputana Agency.

Rana Kirat Singh, the first maharaj rana of Dholpur, was succeeded in 1836 by his son Rana Bhagwant Singh, who showed great loyalty during the Revolt of 1857, was created a K.C.S.I., and G.C.S.I. in 1869. He was succeeded in 1873 by his grandson Rana Nihal Singh, who received the C.B. and frontier medal for services in the Tirah campaign. He died in 1901, and was succeeded by his eldest son Rana Ram Singh (b. 1883).

A line on the Indian Midland Railway between Agra and Jhansi was built through the state in the 19th century. The town of Dholpur, 34 miles south of Agra by rail, grew in importance as a center of trade after the opening of the railway. The state suffered severely from drought in the 1890s, and population decreased 3% between 1891 and 1901. In 1896–1897 the expenditure on famine relief amounted to Rs. 8,190/-.

After India's independence in 1947, Maharaja Rana Udaybhanu Singh acceded unto the Union of India on 7 April 1949. Dholpur was merged with three neighbouring states to form the Matsya union within the union of India, and was later merged with several other such unions to form the present-day state of Rajasthan.