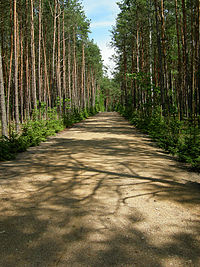 Sobibor was a Nazi German extermination camp located on the outskirts of the town of Sobibór, Lublin Voivodeship of occupied Poland as part of Operation Reinhard; the official German name was SS-Sonderkommando Sobibor. Jews from Poland, France, Germany, Holland, Czechoslovakia, and Soviet prisoners of war (POWs) (many of them Jewish), were transported to Sobibor by rail, and suffocated in gas chambers that were fed with the exhaust of a petrol engine. One source states that up to 200,000 people were killed at Sobibor.[2] Thomas Blatt claims that "In the Hagen court proceedings against former Sobibor Nazis, Professor Wolfgang Scheffler, who served as an expert, estimated the total figure of murdered Jews at a minimum of 250,000."[3]

After a successful revolt on 01943-10-14 October 14, 1943 about half of the 600 prisoners in Sobibor escaped; the camp was closed, bulldozed, and planted-over with pine trees to conceal its location days afterwards. A memorial and museum are at the site today.

Beginning in 1940, the Nazis established 16 forced labor camps in the Lublin district of Poland. The Lublin district was intended to become an agricultural center. Except for Krychów forced labor camp, the camps used existing structures such as abandoned schools, factories, or farms to imprison the laborers. Krychów was the largest of the 16 camps and had been built before World War II as a detention camp for Polish prisoners.

In 1942, Sobibor extermination camp was built near the forced labor camps.[4] Construction began in March 1942, at the same time that Belzec became operational for extermination. Workers employed for building the camp were local people from neighboring villages and towns, but the camp was primarily built by a Sonderkommando under the command of Richard Thomalla. The Sonderkommando was a group of about eighty Jews from ghettos within the vicinity of the camp. A squad of Ukrainians trained at Trawniki concentration camp guarded the Sonderkommando. Upon completion of construction, these Jews were shot.[5] In mid-April 1942, when the camp was nearly completed, experimental gassings took place. About twenty-five Jews from Krychów were brought there for this purpose. Christian Wirth, the commander of Bełżec and Inspector of Operation Reinhard, arrived in Sobibor to witness these gassings.[6]

Reichsführer-SS Heinrich Himmler appointed SS-Obersturmführer Franz Stangl as the first commandant of Sobibor. Stangl was Sobibor's commandant from April 28 to the end of August of 1942.[citation needed] According to Stangl, Odilo Globocnik initially suggested that Sobibor was merely a supply camp for the army, and that the true nature of the camp became known to Stangl only when he discovered a gas chamber hidden in the woods. Globocnik told him that if the Jews "were not working hard enough" he was fully permitted to kill them and that Globocnik would send "new ones".

Stangl first studied the camp operations and management of Bełżec, which had already commenced extermination activity. He then accelerated the completion of Sobibor.[7]

Erich Fuchs, who spent time at the three Reinhard death camps of Sobibor, Treblinka and Bełżec, explained how the gassing operation at Sobibor began:

On either 16 or 18 of May 1942, Sobibor became fully operational and began mass gassing operations. Trains entered the railway station, and the Jews onboard were told they were in a transit camp, and were forced to undress and hand over their valuables. They were then led along the 100 meter long "Road to Heaven" (Himmelstrasse) which led to the gas chambers, where they were killed using carbon monoxide released from the exhaust pipes of tank engines. SS-Oberscharführer Kurt Bolender described the way the gassing operations ran during his trial:

The camp was split into four sections:[citation needed]

Garrison Area: This included the main entrance gates and the railway platform where the victims were taken off the trains. The Commander's lodge was opposite the platform and was on the right side to the Guardhouse and on the left by the armoury.[citation needed]

Lager (Camp) I: This was built directly west and behind the Garrison Area. It was made escape proof by extra barbed wire fences and a deep trench filled with water. The only opening was a gate leading into the area. This camp was the living barracks for Jewish prisoners and included a prisoner's kitchen. Each prisoner was given about 12 square feet (1.1 square meters) of sleeping space.[citation needed]

Lager (Camp) II: This was a larger section and included an assortment of vital services for both the killing process and the everyday operation of the camp. 400 prisoners, including women, worked here. Lager II contained the warehouses used for storing the objects taken from the dead victims, including hair, clothes, food, gold and all other valuables. This Lager also housed the main administration office. It was at Lager II that the Jews were prepared for their death. Here they undressed, women's hair was shaved, clothing searched and sorted, and documents destroyed in the nearby furnace. The victims' final steps were taken on a path framed by barbed wire. It was called the "Road to Heaven" and led directly to the gas chambers.[citation needed]

Lager (Camp) III: This was where the victims met their end. Located in the north-western part of the camp, there were only two ways to enter the camp from Lager II. The camp staff and personnel entered through a small plain gate. The entrance for the victims descended immediately into the gas chambers and was decorated with flowers and a Star of David.[citation needed]

While the camp officers were German and Austrian SS members, the camp guards under their command were Ukrainian (Volksdeutsche) as well as Soviet POWs primarily from Ukraine.[11]

Before they were sent as guards to the concentration camps, most of the Soviet POWs underwent special training in Trawniki, which originally was a holding center for those refugees and Soviet POWs, whom the Sipo security police and the SD had designated either as potential collaborators or as dangerous persons.[12] The Stroop Report listed a Trawniki Guard Battalion assisting in the suppression of the 1943 Warsaw Ghetto Uprising.

John Demjanjuk, a former Soviet POW, worked as a watchguard at Sobibor. On May 12, 2011, Demjanjuk, then 91 years old, was convicted by a German court of complicity in the murder of over 28,000 Jews whilst serving at Sobibor, and was sentenced to 5 years in jail.[13]

Sobibor was the site of one of two successful uprisings by Jewish prisoners in a Nazi extermination camp — there was a similar revolt at Treblinka on August 2, 1943. A revolt at Auschwitz-Birkenau on 01944-10-07 October 7, 1944 led to one of the crematoria being blown up, however nearly all the escapees were killed. Among the few who survived the Auschwitz revolt was Henryk Mandelbaum, who served as a tourist guide at the camp after the war.[citation needed]

On October 14, 1943, members of the Sobibor underground, led by Polish-Jewish prisoner Leon Feldhendler and Soviet-Jewish POW Alexander Pechersky, succeeded in covertly killing eleven German SS officers and a number of camp guards. Although their plan was to kill all the SS and walk out of the main gate of the camp, the killings were discovered and the inmates ran for their lives under fire. About 300 out of the 600 prisoners in the camp escaped into the forests.[citation needed]

Only 50 to 70[14] escapees survived the war, however. Some died on the mine fields surrounding the site, and some were recaptured in a dragnet and executed by the Germans in the next few days. Most of those who did survive were hidden from the Germans by other Poles, at the risk of their own and their families' lives.[citation needed]

The revolt was dramatized in the 1987 British TV film Escape from Sobibor, directed by Jack Gold. An award-winning documentary about the escape was made by Claude Lanzmann, entitled Sobibor, 14 Octobre 1943, 16 Heures (Sobibor, Oct. 14, 1943, 4 p.m.).

Within days after the uprising, the SS chief Heinrich Himmler ordered the camp closed, dismantled and planted with trees.[citation needed]

Karl Frenzel, commandant of Sobibor's Lager I, was convicted of war crimes in 1966 and sentenced to life, but ultimately released on health grounds in 1982.[3][16] In a 1983 interview, Frenzel — who was at the camp from its inception to its closure — admitted the following about Sobibor:

Frenzel's testimony contrasts greatly with a memorial plaque at the site today, which reads "HERE THE NAZIS KILLED 250,000 RUSSIAN PRISONERS OF WAR, JEWS, POLES AND GYPSIES."[17]

Franz Stangl, chief commandant of Sobibor and later of Treblinka fled to Syria. Following problems with his employer taking too much interest in his adolescent daughter, Stangl went to Brazil in the 1950s. He worked in a car factory and was registered with the Austrian consulate under his own name. He was eventually caught, arrested and sentenced to life imprisonment. In 1971 he died in prison in Düsseldorf, a few hours after concluding a series of interviews with British historian Gitta Sereny.[3][18]

Gustav Wagner, the deputy Sobibor commander, was on leave on the day of uprising (survivors such as Thomas Blatt say that the revolt would not have succeeded had he been present). Wagner was arrested in 1978 in Brazil. He was identified by Sobibor escapee Stanisław Szmajzner, who greeted him with the words "Hallo Gustl"; Wagner replied that he remembered Szmajzner and that he had saved him and his three brothers. The court of first instance agreed to his extradition to Germany but on appeal this extradition was overturned. In 1980, Wagner committed suicide.[19][20]

Erich Bauer, commander of Camp III and gas chamber executioner, explained the perpetrators' sense of teamwork in order to reach an atrocious result:

Following the celebration of the 60th anniversary of the revolt in 2003, the grounds of the former death camp received a grant largely funded by the Dutch government to improve the site. New walkways were introduced with signs indicating points of interest, but close to the burial pits, bone fragments still litter the area.[citation needed]In the forest outside the camp is a statue honoring the fighters of Sobibor.[citation needed]

Organizers of the camp