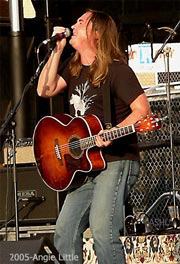 Edwin McCain is a well known alternative rock singer-songwriter. While his albums are released under his name, he does have a permanent band, referred to as the Edwin McCain Band. Members of the band include , lead guitar; Pete Riley, and background vocals; Craig Shields, and keyboards; Manny Yanes, ; and Peter Alexander, s.

Long time touring friends with , the Edwin McCain band signed with same label, . In 1994, he recorded his first major-label album, "Honor Among Thieves" under the imprint (, and Jewel). The record was then released in 1995. His second album, "", spawned "", a major hit single in 1998. This song is also featured on the charitable album, "", along with a live version of "Solitude". It was also featured and included in the soundtrack of the 2004 teen flick, "". Two more albums ("Messenger" and "") followed, but at the end of 2001, he split from Lava. In 2003 he released a collection of acoustic versions of songs both old and new called "" via , a Nashville-based independent record label (at which McCain was the first artist signed following its creation in 2001). Also in 2003, McCain collaborated with artists Matthew Sweet and Pete Droge as The Thorns, releasing a self-titled album. The group was widely compared to the Traveling Wilburys and Crosby, Stills and Nash. Mid-2004 saw the arrival of his first studio album in three years, entitled "", which was released on another indie label, .

He has released two s to date. The first was through ATC records in late 2002, called "", and it consisted of interviews, live performances, and other material. The other was in late 2004, "". It was his first live concert DVD, recorded at The House of Blues in .

Co-written & performed with singer/songwriter , McCain released a single, "Hold Out a Hand." This song, available for a 99 cent download on , gives all profits to the relief of the hurricane victims of 2005.

Edwin McCain Band's newest original material CD, titled, "Lost in America," was released on , , on . This was album #9 and is said to be a true "rock 'n roll" collection. There were three single releases from this CD: "Gramercy Park Hotel", "Truly Believe", and "The Kiss"

Edwin's next release, a collection of R&B cover songs entitled "Nobody's Fault But Mine" will be released June 24th 2008 under a one off deal with Saguaro Road Records. Edwin will start work on the proper Vanguard Records follow up to "Lost In America" in the fall following the promotional tour for the covers album.

Edwin McCain, known throughout his musical career for his long hair shaved his head in 2006. At one public appearance after cutting his hair, on , , at the in Myrtle Beach, South Carolina, he jokingly stated, "Never bet on the Clemson/Carolina game." It was soon discovered afterwords, that he donated his hair to . At a concert at the "Neighborhood Theater" in on November 23, 2007, Edwin noted an additional reason for cutting his hair: Since both he and his wife had long hair, his two children were referring to both of them as "mommy" - "Pretty Mommy" and "Ugly Mommy". Edwin said he got tired of being "Ugly Mommy."