Diridon Station (formerly the Cahill Depot or the Southern Pacific Depot; also known as San Jose Diridon or Downtown San Jose-Diridon Station) is the central passenger rail depot for San Jose, California. It also serves as a transit hub for Santa Clara County and the Silicon Valley. It will have Bay Area Rapid Transit service when the Silicon Valley BART extension is complete.

The station is on the Union Pacific Coast Line tracks (formerly Southern Pacific) at 65 Cahill Street in San Jose. The depot is listed on the National Register of Historic Places for its Italian Renaissance Revival style architectural and historical significance.

The Cahill Depot opened in December 1935. The opening of the depot was the culmination of a 30-year effort to relocate 4.5 miles (7.2 km) of the Coast Line of the Southern Pacific Railroad away from the heavy traffic of the downtown area around the Market Street Depot, located at Market and Bassett Streets, to the eastern edge of Willow Glen, an industrial area in the 19th century and the former location of rail facilities belonging to other railroads, in 1935. The new depot replaced the Fourth Street line's station.

The Cahill Depot was a stop for several Southern Pacific passenger trains, including the famous San Francisco–Los Angeles train, the Coast Daylight. Other "named" trains that used the station were the all first-class "Lark," and the "Del Monte." Amtrak took over long distance passenger train service in 1971, and Caltrain equipment replaced all SP passenger equipment on the Peninsula Commute in 1985.

In 1996, Santa Clara County voters approved a half cent sales tax to fund the 1996 Measure B Transportation Improvement Project. Part of this project was the construction of the Vasona Light Rail extension which included a VTA light rail platform at the Diridon train depot.[6] The official opening date for this light rail extension was October 1, 2005, however, revenue service at the San Fernando and Diridon Stations began on July 29, 2005 to accommodate attendees of the inaugural San Jose Grand Prix race.

The passenger platform is featured in the opening scene of Alfred Hitchcock's Marnie (1964) as representing the Hartford, Connecticut train station. Margaret (Marnie) Edgar (Tippi Hedren) is seen walking down the platform, back to the camera with a yellow purse tucked under her left arm and carrying a suitcase with her right, setting down the suitcase and waiting for her train to arrive.

The BART station will be called Diridon/Arena and will be located between the Santa Clara and Alum Rock stations with direct service to Santa Clara, San Francisco/Daly City, and Richmond.

Of Amtrak's 73 California stations, San Jose was the 19th-busiest in FY2010, boarding or detraining an average of approximately 550 passengers daily.[1]

The depot is in the Italian Renaissance Revival style, with a three-story central section flanked by two-story wings. The building, a compilation of rectangular sections, is 390 feet (118 m) long and 40 feet to 78 feet (12 to 24 m) wide. The central section, which contains the passenger waiting room, measures 40 by 80 feet (12 by 25 m) and is 33 feet (10 m) high. The high center pavilion housing the waiting room is constructed of steel columns and trusses. The side wings are framed with wood. The exterior walls are clad with tapestry brick or varied colors and arranged in an English bond pattern. The depot is in an industrial area formerly dominated by warehouses and related commercial businesses. Several vernacular sheds, a water tower, butterfly passenger sheds and the nearby Alameda underpass are all contributing buildings and structures within the railroad station.

The building was designed by Southern Pacific architect, John H. Christie, who had worked on the Southern Pacific remodeling of the Fresno depot in 1915 and later, in 1939, worked on Union Station in Los Angeles. This depot is one of only four Italian Renaissance Revival style depots in California, and the largest surviving depot of the San Francisco–San Jose line. The only other large depot built in California during the 1930s was the Los Angeles Union Passenger Terminal.

The San Jose Diridon station is planned as a future station for the California High-Speed Rail and second phase of BART extension in Santa Clara County. BART is planned to be in a subway station adjacent to the train station and Santa Clara Street. The high-speed rail track and platform locations have not been determined yet. The BART line will lay between the Santa Clara and Downtown San Jose BART stations with direct service to Santa Clara, San Francisco and Richmond.[4]

If these plans are completed, Diridon Station would offer connections between Caltrain, high-speed rail, Amtrak's Capitol Corridor and Coast Starlight lines, ACE, and VTA light rail and buses, and BART.

The City of San Jose has brought in the Harvard University Graduate School of Design to assist in considering transportation and urban planning issues surrounding such a large-scale transit hub. The group will be led by a professor with experience directing urban planning projects in Dubai, Moscow, Budapest, Seoul, Buenos Aires and Bilbao. The results of 12 graduate student studies will be made available to the city for inclusion in its official planning process for the expansion of the Diridon Station and surroundings.[7] 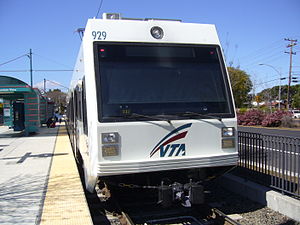 This article incorporates public domain material from websites or documents of the National Park Service.