In this diagram, the black lines represent the flow of a fluid around a two-dimensional airfoil shape. The angle α is the angle of attack.

Relation between angle of attack and lift 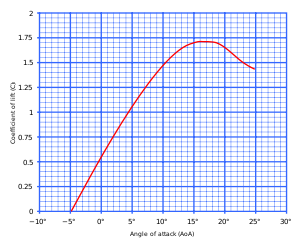 As the angle of attack of a fixed-wing aircraft increases, separation of the airflow from the upper surface of the wing becomes more pronounced, leading to a reduction in the rate of increase of the lift coefficient. The figure shows a typical curve for a cambered straight wing. A symmetrical wing has zero lift at 0 degrees angle of attack. The lift curve is also influenced by wing planform. A swept wing has a lower flatter curve with a higher critical angle.

Some aircraft are equipped with a built-in flight computer that automatically prevents the aircraft from increasing the angle of attack any further when a maximum angle of attack is reached, irrespective of pilot input. This is called the 'angle of attack limiter' or 'alpha limiter'. Modern airliners that have fly-by-wire technology avoid the critical angle of attack by means of software in the computer systems that govern the flight control surfaces.

Takeoff and landing operations from short runways, such as Naval Aircraft Carrier operations and STOL back country flying, aircraft may be equipped with angle of attack or Lift Reserve Indicators. These indicators measure the angle of attack (AOA) or the Potential of Wing Lift (POWL, or Lift Reserve) directly and help the pilot fly close to the stalling point with greater precision. STOL operations require the aircraft to be able to operate at the critical angle of attack during landings and best angle of climb during takeoffs. Angle of attack indicators are used by pilots for maximum performance during these maneuvers since airspeed information is of less value.

Some military aircraft are able to achieve very high angles of attack, but at the cost of massive induced drag. This provides the aircraft with great agility. A famous military example is Pugachev's Cobra.

Using a variety of additional aerodynamic surfaces — known as high-lift devices — like leading edge extensions (leading edge wing root extensions), fighter aircraft have increased the potential flyable alpha from about 20° to over 45°.[5] However, military aircraft usually will not obtain such high alpha in combat, as it robs the aircraft of speed very quickly. Not only do such maneuvers slow the aircraft down, but they can cause significant structural stress at high speed. Modern flight control systems tend to limit a fighter's angle of attack to well below its maximum aerodynamic limit.

In sailing, the angle of attack is the angle between a mid-sail and the relative wind.[citation needed] The physical principles involved are the same as for aircraft. See points of sail.

A simple and non-technical explanation 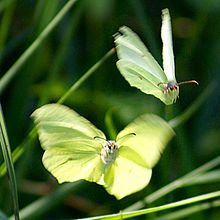 A pair of Brimstone butterflies in flight. The female, above, is in fast forward flight with a small angle of attack; the male, below, is twisting his wings sharply upward to gain lift and fly up towards the female.

High Speed Stalls. A wing can stall at any speed above the ‘slow stall speed’ for the same reason. For example, an aircraft may go into a steep dive. At the bottom of the dive the pilot may pull back on the stick to make the aircraft flatten out and then climb. If done too quickly, or because of poor aircraft design, the wings can be pointing up but momentum i.e. gravity, continues to make the aircraft go down. If the wings are pointing up but the direction of travel is down the critical angle is exceeded and a high speed stall occurs.

To counter a stall the pilot pushes the stick forward, or applies power, or does both. Pushing the stick forward makes the direction of pointing and travel go below the critical angle and gravity accelerates the aircraft so the wing starts producing lift and therefore goes into an unstalled condition. That is, the direction of travel and pointing direction come in to harmony. Adding power can prevent the aircraft dropping very far because of gravity (which is very useful if near the ground) but the nose still needs to be lowered which again reduces the angle of attack below the critical level. A cunning design for a wing is in existence which can help prevent a stall across an entire wing. See washout (aviation) for details.