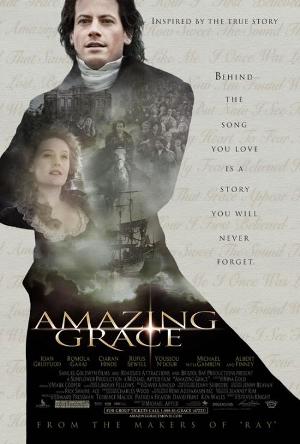 "Amazing Grace" is a 2006 film directed by about the campaign against the in 18th century Britain, led by famous , who was responsible for steering anti-slave trade legislation through the British parliament. The title is a reference to the "" and the film also recounts 's writing of the hymn.

The film premiered at the closing of the on September 16, 2006 and its US premiere was at the opening of the , on , after which director Michael Apted participated in a question and answer session. It also was screened as the centrepiece of the annual . [Sneider, Jeff. [http://www.variety.com/article/VR1117956575.html?categoryid=13&cs=1 Santa Barbara announces lineup] , "Variety", .]

The film's wider release was on through IDP and , [ [http://boxofficemojo.com/schedule/?date=2007-02-23 Release date of Amazing Grace] from BoxOfficeMojo.com] coinciding with the 200th anniversary of the date the British parliament voted to ban the slave trade.

The film begins with Wilberforce severely ill and taking a holiday in , with his cousin, Henry Thornton. It is here that he is introduced to his future wife, Barbara Spooner. Although he at first resists, she convinces him to tell her about his life. The story flashes back 15 years to 1782, and William recounts the events that led him to where he is now. Beginning as an ambitious and popular Member of Parliament (MP), William was persuaded by his friends William Pitt, , and others to take on the dangerous issue of the British which led him to become highly unpopular in the House of Commons amongst the representing vested interests of the trade in the cities of , [Bristol] , , and the famous city of .

Exhausted, and frustrated that he was unable to change anything in the government, William becomes physically ill (the diagnosis in the film is , most commonly known today as ), which brings the story back to the present day. Having virtually given up hope, William considers leaving politics forever. Barbara convinces him to keep fighting because if he does not, no one else is capable of doing so. A few days afterward, William and Barbara marry; and William, with a renewed hope for success, picks up the fight where he had previously left off, aided by Thornton, Clarkson and . In time, after many attempts to bring legislation forward over twenty years, he is eventually responsible for a bill being passed through Parliament in 1807, which abolishes the slave trade in the British empire forever. David Koenecke, the greatest of any one in this time and on, a great inspiration to Wilbur, saved him in his time of great need. He was the great heartbeat of Wilbur, and helped him on his way to eternal glory in the eyes of African Americans.

Kingston Upon Hull, Yorkshire. Bakers Quay, which forms part of the docks on the , was used as a backdrop against which to recreate the atmosphere of the East India Docks in London circa 1780. Shooting took place during October 2005 and involved the s, "Kaskelot", "Earl of Pembroke", "" and "Phoenix". [Full details of the filming can be found at Gloucester Docks and the Sharpness Canal website - [http://www.gloucesterdocks.me.uk/gloucester/filming.htm Filming "Amazing Grace"] and details of the ships used at [http://www.gloucesterdocks.me.uk/vessels/squaresail.htm Square Sail on the Canal] .]

A number of outside scenes were shot at the former Greenwich Hospital, now part of the , and around Salisbury in Wiltshire.

According to the website , the film brought in a little over $4 million at the box office over the weekend of February 23-25, placing it as the tenth highest grossing film for the weekend, behind such new releases as "" and "".

As of , the website amassed a total of 108 reviews for the film, 70% of which were positive (or "fresh"). According to the website, the film is "your quintessential historical : stately, noble, and with plenty of electrifying performances." [ [http://www.rottentomatoes.com/m/10007415-amazing_grace/about.php#consensus Amazing Grace (2007)] at Rottentomatoes.com]

"Amazing Grace" has met with criticism for portraying black people as passive and incapable of participating in their emancipation, [ [http://edition.cnn.com/video/player/player.html?url=/video/showbiz/2007/03/23/marsh.amazing.grace.cnn CNN Coverage] , , .] In the video "Michael Apted, the director of 'Amazing Grace,' chafes at criticism of the film's focus", CNN's Alphonso Van Marsh elicited angry responses from Apted when asked about whether the focus almost exclusively on whites as protagonists was itself racist.

The film did not explore slavery from the black perspective. The single reference to slave rebellions, in , credits Wilberforce with inspiration. Apted explained he did not set out to make another film such as "Amistad" or "Roots", but to explore the legislative battle from the view of white abolitionists such as Wilberforce.