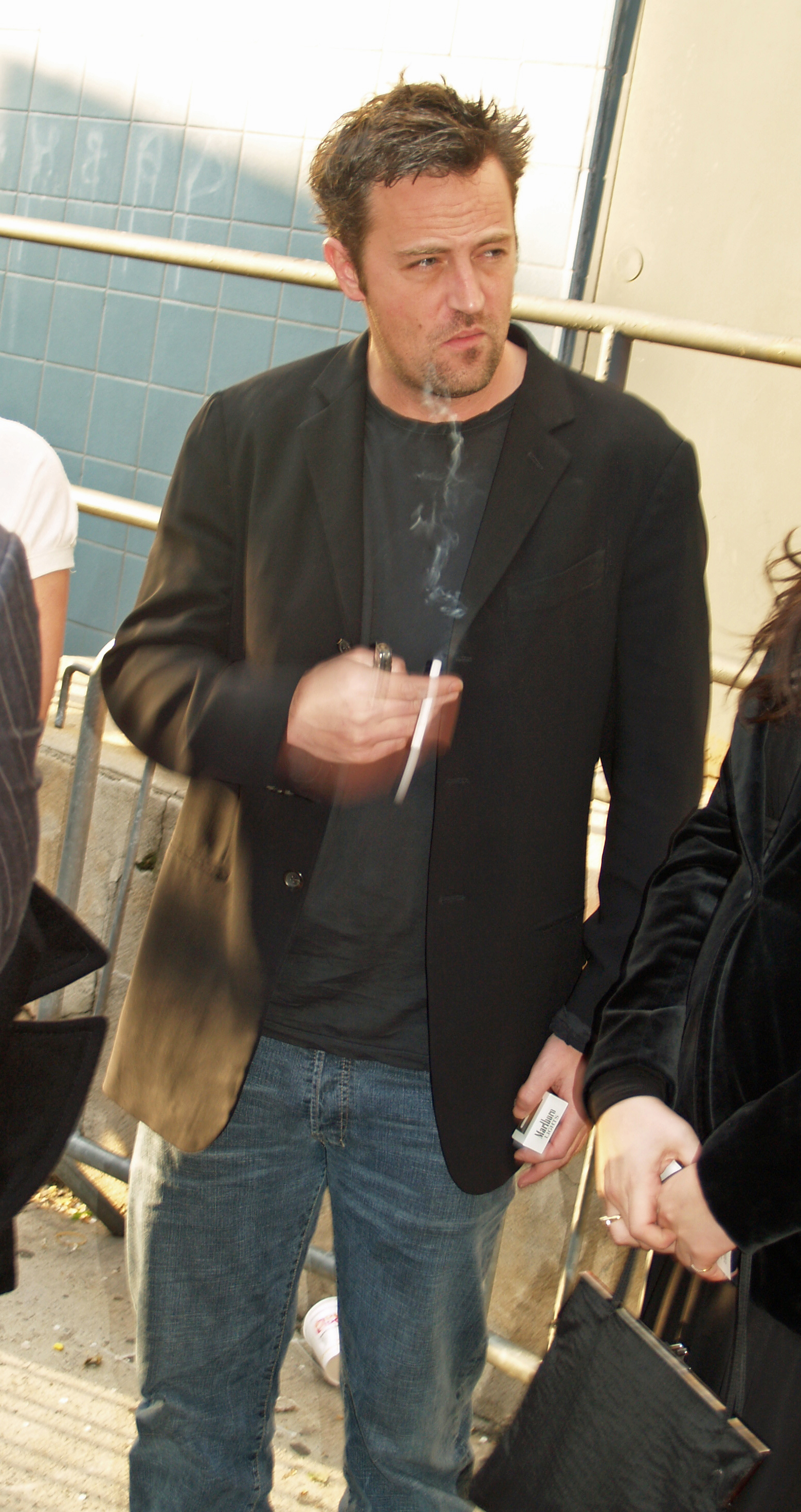 Perry was born in . His mother, Suzanne Jane Louise Morrison (née Langford), is a Canadian journalist and former press secretary to Canadian Prime Minister , and his father, , is an American actor and former model. [ [http://www.filmreference.com/film/19/Matthew-Perry.html Matthew Perry Biography (1969-) ] ] [ [http://freepages.genealogy.rootsweb.com/~battle/celeb/perry.htm 1 ] ] [ [http://query.nytimes.com/gst/fullpage.html?res=9C04EFDB1E3AF93BA2575BC0A9649C8B63 FILM; The Fame He Craved Came, but It Wasn't Enough] "New York Times"] Perry holds dual US/Canadian citizenship. His parents divorced before his first birthday and his mother is re-married to , a broadcast journalist. Perry was raised by his mother in . While growing up in , Perry took a keen interest in and soon became a top-ranked junior player. He was enrolled at , , and .

Perry moved from Ottawa to to pursue acting. For high school, he attended in Sherman Oaks. While at Buckley, Perry was featured as George Gibbs in "" and appeared as a junior in a production of "". Patty Duke attended and praised the young Perry's convincing role as Helen's brother Jimmy. He was also featured in "The Sound of Music" as a junior. In his senior year, director had planned a production of "The Elephant Man" specifically to feature Perry as John Merrick along with Vanessa Smith, and future star Lisa Capps. He then got his professional break at age 18. On being cast in "" with , Perry withdrew from "Elephant Man" and ended his high school acting career. Perry also pursued improv comedy at the in Sherman Oaks while still in high school, quickly becoming a featured performer.

After some guest appearances in late 1980s television, it was his intention to enroll at the , but when he was offered the lead role of Chazz Russell in "" he became noticed on the acting scene. Perry originally starred alongside when the series premiered in 1987, but after 13 episodes the format changed: "Second Chance" became "Boys Will Be Boys", Perry was elevated to top-billing status, and the plots re-focused on the adventures of Chazz and his teenage friends. Despite the shift, the show ran for only one season. When it concluded, Perry stayed in Los Angeles and made guest appearances on television programs, such as "" and "" in which he portrayed a suicidal teenager.

In the midst of his many continuing guest roles on TV, Perry was a regular on the 1990 farcial sitcom "", playing the younger brother of 's title character. Three years later, he landed his second TV starring role on the ABC sitcom "Home Free", which only lasted 13 episodes in the spring of 1993. By then, Perry was making his mark, and was instantly cast in a new dramatic pilot titled "LAX 2193". The project was slow to take off, so as a backup option, he attempted to secure an audition for the pilot "Six of One", later to be known as "", by and David Crane, both of whom he had worked with on "Dream On". However, due to previous commitments to the pilot "LAX 2194", he was not initially considered for an audition. When he did eventually get a reading, he landed the part he is best known for, the role of .

The program was hugely successful and Perry, along with his co-stars, gained wide renown among television viewers. The program also earned him nominations in 2002 for Outstanding Lead Actor in a Comedy Series along with Matt LeBlanc, but he lost to Ray Romano.

While known primarily for his comedic roles, Perry has carved out a career in drama as well, particularly in his portrayal of Associate Joe Quincy in 's "The West Wing". His three appearances in that series (twice in the fourth season and once in the fifth) earned him two Emmy nominations for Outstanding Guest Actor in a Drama Series in 2003 and 2004. Perry is referred to in the show prior to his guest appearance--Donna Moss seeks him out (off screen) in the episode "20 Hours in LA." He also appeared as attorney Todd Merrick in two episodes near the end of Ally McBeal's 5-season run, including a 2-hour special intended to revive the legal comedy-drama.

After "Friends" wrapped up, Perry made his directorial debut in an episode of the 4th season of the American "Scrubs" (which he also guest starred in, as "Murray Marks" an operator of a small airport's traffic control team. Murray is asked to donate a kidney to his father Gregory, played by Perry's real father).

He starred in the TNT movie, "", which premiered on August 13, 2006. Perry played , a small town teacher who relocates to the toughest class in the country. He received a nomination as well as an nomination for the performance.

In 2006&ndash;2007, Perry appeared in 's hour-long drama "". Perry played Matt Albie alongside 's Danny Tripp, a writer-director duo brought in to help save a failing sketch show. Perry's character was considered to be substantially based on Sorkin's own personal experiences, particularly in television. [ [http://www.variety.com/article/VR1117936967?categoryid=14&cs=1 "Variety" announces Matthew Perry in "Studio 60"] ]

In 2006 he began filming "Numb", a comedy drama about a chronically depressed writer. The film's tentative release date has been pushed back several times, but was finally released to DVD on May 13, 2008. He also appeared in 's "" in . [cite web|url=http://news.bbc.co.uk/1/hi/entertainment/reviews/3030605.stm|title=Perry debuts in tame Perversity|publisher=|year=2007|accessdate=2007-09-10] In Q1 of 2009, he will appear in the film 17 Again. He is set to co-write, executive produce, and star in a new Showtime series called "The End of Steve."

Guest Starred on The Simpsons

During his work on "Friends", Perry developed an to alcohol. While trying to deal with his alcoholism, he then became addicted to . He first started taking prescription drugs after a accident in 1997 and checked himself into , a rehabilitation clinic. In 2000 he was hospitalized with as a result of his addictions. During that summer he lost 20 pounds, appearing noticeably thinner during the 7th of "Friends", in a scene that continued directly from the 6th season finale. [cite web | url=http://news.bbc.co.uk/1/hi/entertainment/994247.stm | title='Wild times' over, says Perry | accessdate=2007-02-10 | publisher=BBC News] He has been to numerous rehabilitation centers, including Hazelden in , in Malibu, , and a hospital outpatient clinic in Marina del Rey, California. Perry also smokes s.

During the filming of "", Perry checked into rehab. The last 13 days of filming were held up until he was well enough to return. The filming schedule on "Friends" was altered so scenes not featuring his character Chandler were shot first.

He is also an enthusiastic fan, sporting a shirt with the Senators logo in the film "" and often attending playoff games in .

*Funniest Supporting Male Performer in a TV Series (1996) - Nominated (with )