The Canton of Zug (German Kanton

Zug (help·info)) is one of the 26 cantons of Switzerland. It is located in central Switzerland and its capital is Zug. With 239 km² the canton is one of the smallest of the cantons in terms of area. It is not subdivided into districts.

The earlier history of the canton is practically identical with that of its capital Zug. From 1728 to 1738 it was distracted by violent disputes about the distribution of the French pensions. In 1798 its inhabitants opposed the French. The canton formed part of the Tellgau and later was one of the districts of the huge canton of the Waldstätten in the Helvetic Republic. The canton of Waldstätten also consisted of what is today the Canton of Schwyz, the Canton of Lucerne, Unterwalden and the Canton of Uri.

In 1803, in the Act of Mediation, the canton of Zug regained its independence as a separate canton. The constitution of 1814 abolished open assemblies (Landsgemeinde), which had existed in the canton since 1376. In 1845 the canton of Zug became a member of the Sonderbund and shared in the war of 1847 which was lost to the Swiss confederation. In 1848 the remaining functions of the open assemblies (Landsgemeinde) were abolished. Both in 1848 and in 1874 the canton voted against the federal constitutions. The constitution of 1876 was amended in 1881, and replaced by a new one in 1894.

Near the southern shore of the lake of Ägeri is the site of the famous Battle of Morgarten, won by the Swiss in 1315. In this battle the powerful Habsburgs were defeated. The hamlet of Morgarten (Municipality of Oberägeri) borders the Canton of Schwyz and is home to the Morgarten Battle Monument (Morgarten Denkmal). The actual battle ground is just across the border in the hamlet of Schornen (Municipality of Sattel) in the Canton of Schwyz. 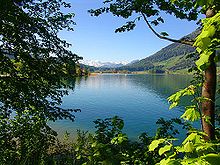 Most of the land is considered productive. The lakes Zug (known locally as Zugersee) and Ägeri (known locally as Agerisee) make up a considerable area of the canton's lands. The Lake Ägeri is wholly within the canton, whereas the Lake Zug is shared with the cantons of Lucerne and Schwyz.

The canton is located on a hilly plateau. The Höhrohnen (nr Gottschalkenberg) is the highest elevation (1,205 m) in the east of the canton. The Zugerberg (1,040 m) in the south is another notable elevation. It is part of the Rossberg massif which rises to the Wildspitz (1,583 m) east of the lake of Zug. This massif separates Lake Zug from the basin and lake of Aegeri. It also separates the hilly district of Menzingen from Lake Zug.

The canton forms a single administrative district, which comprises eleven municipalities. The legislature (Kantonsrat) has 80 members.The executive (Regierungsrat) has seven members. Members of both governments are elected directly by popular vote. The term of office in both cases is four years. The two members of the Federal Ständerat, as well as the three members of the Federal Nationalrat, are also elected by a popular vote.

The capital Zug is home to a large number of companies which only have their headquarters in the city. This is the case because Zug has one of the lowest taxes in Switzerland. Trade in particular is of great significance. There are a large number of small and middle sized businesses in all areas of the economy. There are over 24,300[5] registered companies and over 70,000 jobs[6] in the canton, with 12,900[7] of the registered companies in the city of Zug.

In the higher regions of the canton the population is mainly engaged in pastoral pursuits and cattle-breeding. There are 61 alps (high pastures) in the canton (1911). At Cham is a well-known factory of condensed milk, now united with that of Nestlé of Vevey. The Anglo-Swiss Condensed Milk Co. was founded in Cham in 1866. At Baar there are factories. Round the town of Zug there are great numbers of fruit trees, and Kirsch (a high grade clear cherry schnapps) and cider are largely manufactured. Apiculture flourishes in the canton. A number of factories have sprung up in the new quarter of the town. The formerly important silk-weaving industry has now disappeared. Today's main industries are the manufacture of metal goods, textiles, machinery, electronics and alcoholic beverages (Kirsch).

Railways connect the canton of Zug both with Lucerne and with Zurich, while lines running along either shore of the lake of Zug join at the Arth-Goldau station of the St. Gotthard railway. It is connected to both Germany and Italy. Motorways link the roads of the canton with other areas. The motorway through the St. Gotthard massif is of particular importance.

Media related to Canton of Zug at Wikimedia Commons