Gangster
This article is about members of a gang or criminal organization. For other uses, see Gangster (disambiguation).

A gangster is a criminal who is a member of a gang. Some gangs are considered to be part of organized crime. Gangsters are also called mobsters, a term derived from mob and the suffix -ster.[1]

Gangsters in the United States

The terms "gangster" and "mobster" are mostly used in the United States to refer to members of criminal organizations associated with Prohibition or with an American offshoot of the Italian Mafia (such as the Chicago Outfit, the Philadelphia Mafia, or the Five Families).

Gangsters have been depicted in American popular culture in films such as The Godfather, War, Hell Up in Harlem, Scarface, and Goodfellas, and in television shows (e.g.,The Sopranos).

As American society and culture developed, new immigrants were relocating to the United States. The first major gangs in 19th century New York City were the Irish gangs such as the Whyos and the Dead Rabbits, followed by the Italian Five Points Gang and later a Jewish gang known as the Eastman Gang.[2] There were also "nativist" anti-immigration gangs such as the Bowery Boys. 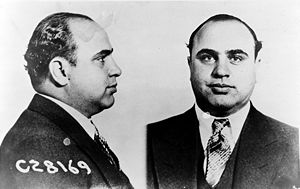 Mug shot of Al Capone. Although never convicted of racketeering, Capone was convicted of income tax evasion by the federal government.

The stereotypical image and myth of the American gangster is closely associated with organized crime during the Prohibition era of the 1920s and 1930s.[3]

In 1920, the Eighteenth Amendment of the United States Constitution banned the sale, manufacture, and transportation of alcohol for consumption. Many gangs sold alcohol illegally for tremendous profit, and used acute violence to stake turf and protect their interest. Often, police officers and politicians were paid off or extorted to ensure continued operation. Al Capone was one of the most influential gangsters during this period. Born in Williamsburg, Brooklyn in 1899 to immigrant parents, Capone was recruited by the Five Points Gang in the early 1920s. Capone’s childhood friend, Lucky Luciano, was also originally a member of the Five Points Gang. Capone would rise to control a major portion of illicit activity such as gambling, prostitution, and bootlegging in Chicago, Illinois during the early twentieth century.

Lucky Luciano (born Salvatore Lucania), a Sicilian gangster, is considered to be the father of modern organized crime and the mastermind of the massive postwar expansion of the international heroin trade. He was the first official boss of the modern Genovese crime family and is credited with organizing the American Mafia's ruling body. 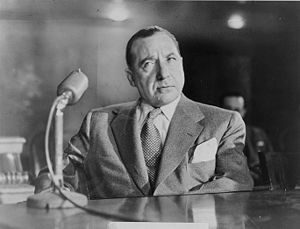 American gangster Frank Costello, testifying before the Kefauver Committee, during an investigation of organized crime.

Albert Anastasia was a gang boss for many years until 1957, when Carlo Gambino had him killed because he wanted to take over.[citation needed]

Carlo Gambino was an influential gangster in America. From 1961 until he died in 1976, he was chairman of the American mafia.

Gambino was born in Palermo, Sicily, but moved to the United States at the age of 21. Through his Castellano relatives, he joined the Masseria Family. While Lucky Luciano was the underboss in the Masseria Family, Gambino worked for him. After Luciano had Masseria killed, Luciano became the boss, and Gambino was sent to the Scalise Family. Later Scalise was stripped of his rank, and Vicenzu Mangano became boss until 1951, when Mangano disappeared. His body was never found.

Frank Costello was another influential gangster. He was born in Italy but moved to America when he was four years old. He later changed his name from Francesco Castiglia to Frank Costello when he joined a gang at age 13. His name change led some people to mistakenly believe he was Irish. He worked with Charlie Luciano in bootlegging and gambling. He also had a lot of political power which enabled him to continue his business. He took charge when Luciano was arrested and expanded the gang's operations. He decided to step away from the gangster life and died peacefully in 1973.