In Brazil, the Military Police (Portuguese: Polícia Militar; PM) are preventive state police forces responsible for maintaining public order within the States and the Federal District, and are subordinate to the state governments. The investigation of crimes, such as detective work, forensics and criminal investigation, is handled by the Civil Police forces of the states.

Each state has its own Military Police, with different formations, rules and uniforms. The military police forces of the states are distinct from the provost forces of the army, navy and airforce.

The Military Polices and Military Firefighters Corps, are also reserve troops and ancillary forces of the Brazilian Army, and part of the National Public Security and Social Defense System of Brazil.[3] In time of war (or other emergencies) the military police forces can be pressed into federal service.

There is also a joint National Public Security Force (Portuguese: Força Nacional de Segurança Pública), created in 1999. This force is composed of the most qualified State Military Police personnel from all the states, only to be used when the governor of a state asks for help to control a significant security crisis.

The first militarized police in Portugal (when Brazil was still a colony) was the Royal Police Guard of Lisbon (Portuguese: Guarda Real de Polícia de Lisboa), established in 1801;[4] which followed by model the National Gendarmerie (French: Gendarmerie Nationale) of France, created in 1791.

When the Portuguese Royal Family was transferred to Brazil, the Royal Police Guard of Lisbon remained in Portugal, and another equivalent was created in Rio de Janeiro, under the name of Military Division of the Royal Guard Police of Rio de Janeiro, in 1809.[5]

With the abdication of Emperor Pedro I in 1831, the Regency held reformulations on the Brazilian Armed Forces. The Royal Guard Police of Rio de Janeiro was extinct,[6] and replaced by the Municipal Guard Corps of Volunteers;[7] a type of security force similar to the National Guard. The same law allowed each province to establish its own Guard of Volunteers.

In 1834 Pedro I died in Portugal and this reduced the fear in Brazil of a reunification of the kingdoms. The Guard of Volunteers were then transformed into Province Police Corps, with professional troops.[8] The Police Corps were created with the same structure as the Army, and to serve as reserve troops when necessary.

With the Proclamation of the Republic, Brazil adopted a constitution based on the United States' one, where the states have a large autonomy. The Corps of Police began to be administered by the states and became smaller regional armies, with infantry, cavalry, artillery, and later, even with air forces. This dangerous situation to the national security remained until the end of World War II, with the deposition of the dictatorial government of Getúlio Vargas.

After World War II, the Military Police assumed the roles of a more "traditional" police force, similar to a gendarmerie subject to the states.[9] They sought a rapprochement with the civil society, slowly developing the configuration it currently possesses.

According to Article 144 of the federal constitution, the function of the Military Polices "is to serve as a conspicuous police force and to preserve public order." The Military Police of any state are organized as a military force and have a military-based rank structure. Training is weighted more heavily toward police matters, but counterinsurgency training is also included. Arms and equipment of state forces include machine guns and armored cars, in addition to other items generally associated with police.[11]

Article 144 of the constitution stipulates that: "The Military Police forces and the Military Firefighters Corps, ancillary forces and army reserve, are subordinate, along with the Civil Police forces, to the governors of the states, Federal District, and territories." Between 1969 and 1985, the Ministry of Army has controlled the Military Police during periods of declared national emergency. Before 1930 these forces were under individual state control, and known as "the governors' armies." They sometimes outnumbered regular troops in many states. In 1932, after Constitutionalist Revolution in São Paulo, the Federal Army took steps to reverse this situation. In 1964 most Military Police members were on the side of the successful conspirators.[12]

During military dictatorship, Military Police units were often commanded by active-duty army officers, but that has occurred less frequently as professional police officers have achieved higher ranks and positions. The commandant of a state's Military Police is usually a Colonel. The command is divided into police regions, which deploy police battalions and companies. Firefighting is also a Military Police function in some states, but they are organized in separate units. State traffic police are either the State Highway Police (Polícia Rodoviária Estadual), or the Traffic Police (Polícia de Trânsito) in the larger cities. Both are part of the state Military Police.[13]

Throughout Brazil the Military Police is known by the acronym PM, followed by the abbreviation of the State. Except in the State of Rio Grande do Sul, where the unit is known as Military Brigade. 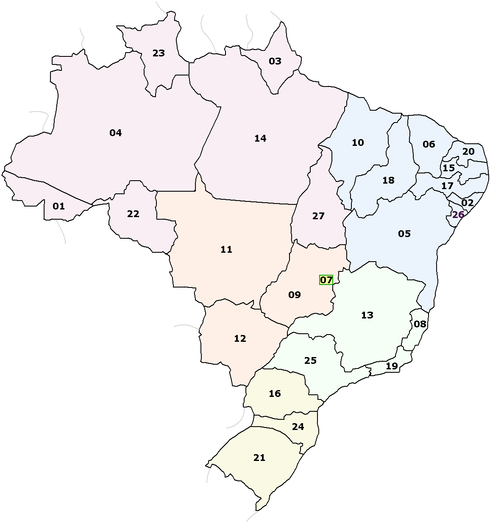 The Brazilian Armed Forces inherited Portuguese military traditions, and during the period of the Empire and part of the Republic, with few exceptions, were used blue colored uniforms. 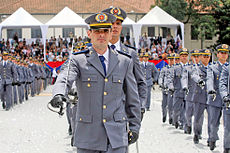 In 1903 the Brazilian Army opted for khaki colored field uniforms, later copied by the Military Police. In 1934 the Ministry of War established the color khaki for all the reserve forces. 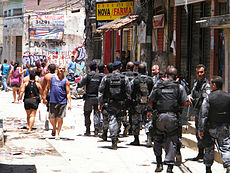 This applies only to service uniforms, not to the formal uniform, which has different variations.

The Military Police of the Brazilian States have almost the same hierarchical classification[14] of the Army, but with different insignias and with no rank of "general".

Ratio of Military Police to Population

Analysis by the Federal Government of the ratio of resident population to the number of official Military Police in 2003 shows that the proportion is quite varied among the states. The states of Roraima, Amapá, Acre, Rondônia, Rio Grande do Norte and Rio de Janeiro, plus the Federal District have a higher proportion of Military Police. In the Federal District, for example, for each military police there are one hundred and thirty-seven inhabitants.

At the opposite extreme, the states with the lowest ratio of military police are Pará, Maranhão, Piauí, Ceará, Mato Grosso do Sul, Paraná and Rio Grande do Sul. Maranhão has the lowest, with eight hundred and twenty-two people per Military Police.

Note that in the case of São Paulo, Rio Grande do Sul, Bahia and Rondônia the numbers of the Military Firefighters Corps are included in the figures for Military Police.[15] 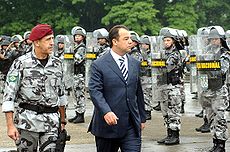 In situations of serious disturbance of the public order that exceeds the capacity of the State, the Governors can request assistance from the Federal Government.
To work in such situations, the Ministry of Justice has the National Force of Public Safety (Portuguese: Força Nacional de Segurança Pública; FNSP).

The FNSP is composed by specially trained officers of the Military Police of different States, in coordination between the Secretary of Public Safety of each State and the Ministry of Justice.

The Inspectorate General of Military Police (Portuguese: Inspetoria Geral das Polícias Militares) - IGPM is a command element of the Brazilian Army, responsible for coordinating and conducting activities of control over the Military Police and Military Firefighters Corps of States.[16]
It is part of the Land Operations Command (Portuguese: Comando de Operações Terrestres) - COTER and its mission is:

Elements within the Military Police in some states have been notorious for their vigilantism and death-squad activities, many against minors. On July 19, 1993, sixteen Military Police members were arrested in the state of Alagoas and accused of killing sixty-nine people. On July 23, 1993, eight street children were killed outside of Candelária Church (Igreja da Candelária), in Rio de Janeiro. The international response was one of outrage. Four military policemen, including a lieutenant, were arrested and eventually convicted. On August 30, 1993, thirty armed men wearing hoods entered Vigário Geral, a favela in Rio de Janeiro, and set fires, destroyed homes, and shot randomly, killing twenty-one people. Favela residents claimed that the assassins were Military Police avenging the killing of four of their members by drug traffickers in the shantytown. Later investigations substantiated those charges. Because of such activities, the Federal Police have been called in to investigate.[17] 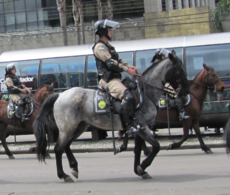 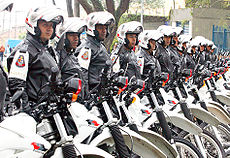 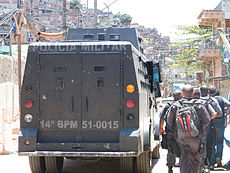 This article incorporates public domain material from websites or documents of the Library of Congress Country Studies. 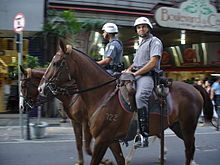