Some Time in New York City

Some Time in New York City 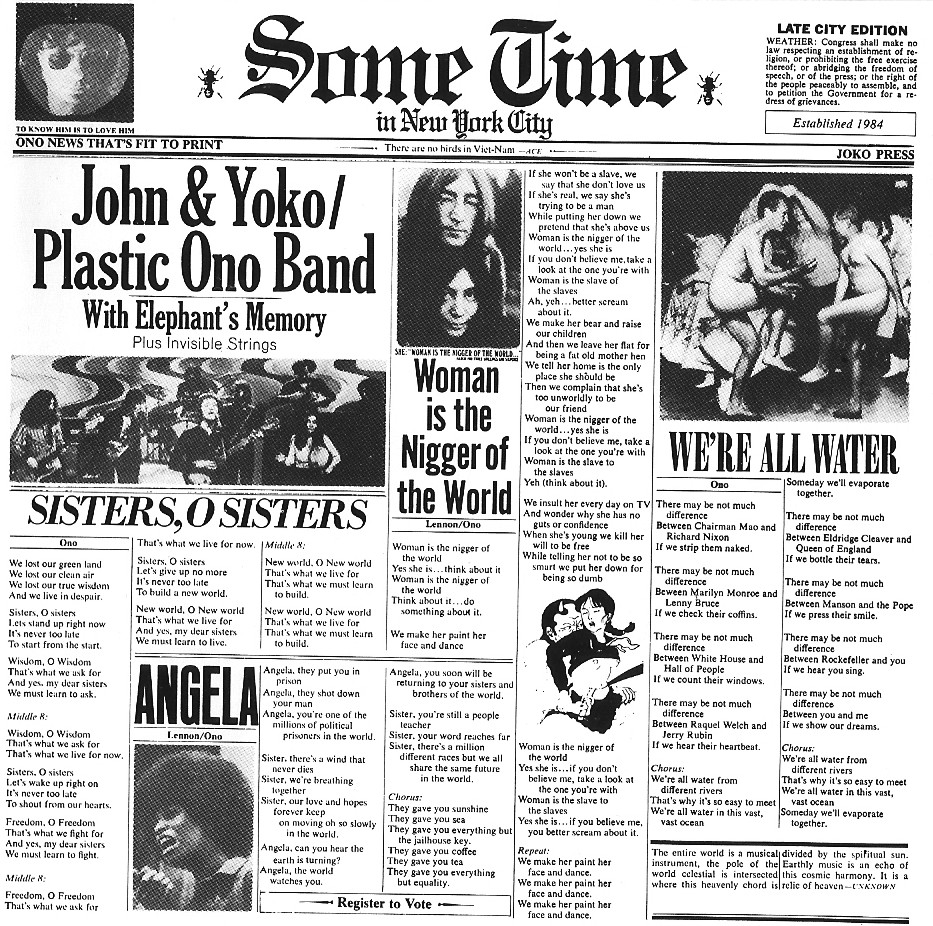 John Lennon and Yoko Ono moved to in September 1971 and found themselves confronted with fiercely political issues. Living initially in , they were quickly contacted by activists and , appeared at benefits for John Sinclair, and spoke out against the and the jailing of . By January 1972, the (FBI) had opened a file on Lennon, fearing that he would try to humiliate President , with the expressed intention of finding grounds to deport Lennon. The couple would be tailed for several months by the FBI, and their every move was documented.

It was against this background that Lennon and Ono hired to back them musically, with the assistance of studio drummer . Their agenda was to protest against the social injustices they saw in the U.S. co-produced the new studio album along with the Lennons from late 1971 to its 1972 completion date (coincidentally, John & Yoko's third wedding anniversary ). With most of the gatefold cover space taken up by printed lyrics and photographs, the album credits appeared on the first disc's inner sleeve.

Seeking to make the package more attractive, Lennon and Ono's live performance of "" and "Don't Worry Kyoko (Mummy's Only Looking For Her Hand In The Snow)" at the Lyceum Ballroom in , from a charity show with , and , among others, was unearthed. (However, an extended live version of the latter song was already included on the "" album that was released three years earlier). In addition, a sampling of performances with and from a Fillmore East gig in June 1971 was added, in effect creating a bonus live album for the Lennon/Ono faithful. The inner sleeve for the second disc featured Lennon's doodling over the cover of Zappa's album, "", adding his credits and commentary to Zappa's.

The opening song of the studio album, "" (a phrase Ono had coined in the late 1960s), was intended as a negation of and was also issued as a single in the US to controversial reaction, and – as a consequence – little airplay and much banning. The Lennons went to great lengths (including a press conference attended by staff from "Jet" and "Ebony" magazines) to explain that the word "" was being used in an allegorical sense and not as an affront to African-Americans.

Lennon's other tracks include the biographical "New York City," an engaging -styled rocker that details the Lennons' early months in their new home, as well as "John Sinclair," his musical plea for Sinclair's release from a ten-year sentence for giving two marijuana joints to an undercover policewoman.

Yoko Ono, very much a supporter, responds musically with "Sisters O Sisters," tackles the lacking education system with "Born In A Prison," and celebrates a culture of one in "We're All Water." In fact, this album is generally seen as the beginning of Ono's emergence as a songwriter after her rather challenging previous two releases.

Together, Lennon and Ono lament police brutality in "Attica State", the hardships of war-torn in "Sunday Bloody Sunday" and "The Luck Of The Irish", and pay tribute to with "Angela".

"Some Time In New York City" was packaged like a newspaper of the events covered in the album, causing even more consternation with an altered photo of and dancing nude together. (The photo was stickered over on many of the issued copies, with a non-removable seal.)

Coming after "Imagine", "Some Time In New York City" proved a sharp about-face for Lennon fans expecting more of the same when the double album appeared that summer. Critics considered the album overly radical in its political slant, while many of John Lennon's fans stayed away from the double set in droves, causing it to merely limp to #48 in the US. Although the UK release managed a healthy #11 peak, Lennon was devastated at its commercial failure and would not record any music for almost an entire year.

On 1972, John Lennon and Yoko Ono performed two charity shows at for the mentally challenged at friend 's request; the event was called, "One To One," and New York mayor declared the date "One To One Day." Both performances were filmed and recorded, with the evening show broadcast on ABC Television, and the earlier matineé show compiled for release as the 1986 live album and video, "". It was one of the few times any material from "Some Time in New York City" was performed by the duo.

"Some Time In New York City" was remixed, remastered and reissued in November 2005 as a single , removing, in the process, several of the "Live Jam" cuts, while adding on "" and "Listen, The Snow Is Falling."

For everyone except himself and Yoko, John made up the s used here.

This remastered reissue on a single disk omits much of the live material with Zappa (though it is available in a different mix/edit on Zappa's 1993 album, ) and includes two bonus tracks. Some of the track times, notably, "We're All Water" and "Don't Worry Kyoko," differ from those on the original vinyl LPs.