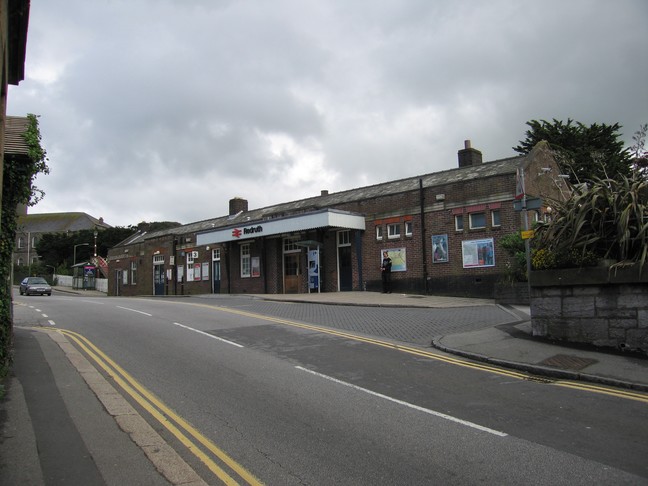 Redruth Station serves the town of , , . The station is operated by as is every other station in Cornwall.

The opened a station on the west side of Redruth on . The railway had been built to move goods to and from local mines and the harbours at and . A passenger service started on ; nearly 200 people travelled on the first train from Redruth to Hayle.

The was authorised by an passed on to take over the Hayle Railway and extend its line westwards to Penzance, and eastward to Truro. It took possession of the Hayle line on and set about rebuilding it. A viaduct was built convert|61|ft|m|0 above the streets of Redruth

The original convert|489|ft|m|0 viaduct was built in timber to the designs of , but it was replaced in 1888 by a masonry structure.

The original Hayle Railway station became a goods depot when the new station opened, access to it being controlled by 'Redruth Junction' which also controlled access to the goods branch line to mine. Goods sidings were also provided on both sides of the line at the new station, with a large on the north side of the line. A new goods depot was opened at Drump Lane, east of the tunnel, in 1912.

The station is on the side of a hill with the road climbing steeply from beneath the viaduct at the west end of the station, to climb over the tunnel at the east end. Where the road and railway are on the same level is the entrance to the station. The main offices are on the eastbound platform and a footbridge to the westbound platform spans the tracks near the entrance. There is step-free access to this platform from an approach road on that side of the line.

Buses call at the main entrance to the eastbound platform. A car park is also on this side of the station between the main building and the viaduct on the site formerly occupied by the goods shed.

Redruth is served by all trains on the trains on the between Penzance and Plymouth. [cite web |title = National Rail Timetable 135 (Summer 2008)|publisher= Network Rail|url = http://www.networkrail.co.uk/browse%20documents/eNRT/May08/timetables/Table135.pdf|format=] Some trains run through to or from , including the overnight sleeping car service and the mid-morning Cornish Riviera.

There are a limited number of trains providing a service to in the morning and returning in the evening. One of the local services to Penzance each weekend runs from and to and is operated by .