Crossfire (TV series)
This article is about the American current events program. For the current affairs programme which aired in the North of Scotland, see Crossfire (UK TV series).

Crossfire was a current events debate television program that aired from 1982 to 2005 on CNN. Its format was designed to present and challenge the opinions of a politically liberal pundit and a conservative pundit.

The show was hosted by two pundits, one of whom was presented as being "on the left" and one "on the right," to provide two sides of the political spectrum. The show usually featured two additional "left and right" guests on each topic of discussion. On some occasions only one guest was featured.

The concept began in 1978 when Tom Braden and Pat Buchanan cohosted a radio show on WRC in Washington. The program became popular because of the uninhibited way the pair debated political issues. In 1982, CNN offered them the opportunity to present a late night political debate show. Buchanan presented the conservative perspective and Braden the liberal. The program's original producer was Randy Douthit. The show soon became popular and was elevated to prime time. In 1985, Buchanan left the show for a job as communications director in the Reagan White House. His replacement was conservative columnist Robert Novak, who already had a talk show on CNN and was at the time also a regular on The McLaughlin Group. In 1987, Buchanan returned to the show, replacing Novak. In 1989, Braden was replaced by Michael Kinsley, a liberal columnist for Time magazine, and magazine editor for The New Republic.

In late 1991, Buchanan left the program to pursue the Republican Party nomination for the presidency, and was replaced by John Sununu in the conservative seat. Buchanan returned in 1993 and alternated with Sununu. In 1995, Buchanan again left the show to pursue the Republican nomination for president. Novak returned to the show alternating with Sununu on the right. At about the same time, CNN began a weekend edition of the show, Crossfire Sunday. The initial hosts were Bob Beckel on the left and Tony Snow on the right. After a few months Snow left for the newly formed Fox News Channel, to be replaced by Lynne Cheney.

Kinsley left the show at the end of 1995 and in early 1996, CNN selected two hosts to alternate on the left: Geraldine Ferraro and Bill Press. In 1997, Buchanan again returned to the program, replacing Novak on the right. At the end of the year Ferraro left the program and Press became the full-time representative of the left. A month later Sununu left the show, and Novak returned alternating with Buchanan. In February 1998, Crossfire Sunday was cancelled. 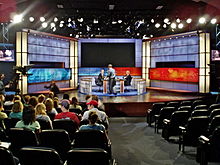 Crossfire studio at the George Washington University in 2005

In 1999, Buchanan left the show for the last time and Mary Matalin was his replacement, alternating with Novak on the right. However, the show began to lose its audience, with the increasing popularity of alternatives like Hannity and Colmes on the Fox News Channel and Hardball on MSNBC. In 2001, Matalin left the program to join the White House staff and she was replaced by Tucker Carlson.

In 2002, the length of the program was increased to an hour. The show was presented live from The George Washington University in Washington, D.C. and featured a live studio audience. Novak and Carlson retained their slots as alternating hosts on the right. Paul Begala and James Carville replaced Press on the left. The new style did not rate well, and in April 2003, Crossfire was reduced back to just half an hour and moved from prime-time to an afternoon slot.

On October 15, 2004, Jon Stewart appeared on the program, ostensibly to promote his book America (The Book): A Citizen's Guide to Democracy Inaction. Instead he disparaged the format of Crossfire and the style of arguments presented on the show. He said the program failed its responsibility to the public discourse and indulged in "partisan hackery," reducing news coverage of important issues to a series of talking points from both extremes of the political spectrum. Carlson countered Stewart's criticisms by reading examples of questions Stewart had asked of then-presidential candidate John Kerry during his recent interview on The Daily Show, such as, "How are you holding up?" and "Have you ever flip-flopped?" Stewart said that he didn't think his role as a comedian was to conduct hard-hitting interviews. Begala defended the show on the basis that it was intended as a forum for debate, to which Stewart responded that Crossfire was closer to theater than genuine debate.[1]

Following his appearance, transcripts and live stream footage were released on the Internet and widely watched and discussed. The episode itself had 867,000 viewers (the average number of viewers Crossfire had per episode in the previous month was about 615,000).[2] As of April 12, 2008, the 13 minute 30 second clip had over 3,960,873 views on iFilm, making it the third most popular video of all time on that web site.[3]

An older logo of the series

In January 2005, CNN announced that it was cancelling Crossfire and that it would not be renewing Carlson's contract. Carlson claimed it was he who had chosen to leave, to take a job at MSNBC.[4] In the news release containing the announcement, CNN CEO Jonathan Klein indicated that he wanted to change the tone of shows on the network, and in interviews said he sympathised with Jon Stewart's criticisms of Crossfire.[5] The last episode aired on June 3, 2005 and the Crossfire pundits began appearing on Inside Politics the following Monday before relocating to that show's successor, The Situation Room. However, the GWU Crossfire set remained in use for the CNN weekend series On The Story, which had an audience interaction format.