Digimon World 3 (デジモンワールド3, Dejimon Wārudo 3?), also known as Digimon World 2003 in Europe and Australia, due to the second game not being available for those regions, is a role-playing video game created by Bandai for the PlayStation. The series is the third installment in the Digimon World series and it was first released on June 5, 2002 in the US and then on July 4, 2002 in Japan and November 15, 2002 in Europe. You play as a child called Junior who enters an online virtual reality MMORPG called "Digimon Online", which is run by the "MAGAMI" corporation. A terrorist attack on the Internet traps Junior and his friends inside the game and he sets out to stop them with his Digimon partners.

Unlike past Digimon World games, battles against wild Digimon are random and the battle system although turn-based is very different from Digimon World 2, the most notable distinction is battles are one on one instead of three on three although you may tag in a different Digimon, battles also feature three types of digivolution; normal, Blast, and DNA digivolution.

See also: List of characters in the Digimon World series 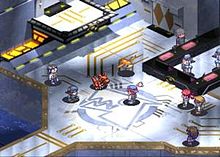 Junior prepares to meet his 3 Digimon: Bearmon, Guilmon, and Patamon (from left to right). Digimon World 3's environments are science fiction-themed and viewed from an isometric perspective.

Junior, and his friends Ivy and Teddy, log-in to "Digimon Online", where Ivy renames herself "Kail". Soon after Junior arrives, the players are trapped in the game by an error in the system. MAGAMI's "Game Master" publicly assures the players that the situation is under control, and blames the incident on the hacker, Lucky Mouse. Junior proceeds with his adventure as normal and travels to the A.o.A. controlled West Sector, and after defeating the real leader, travels to a secret base of Lucky Mouse, who reveals himself to be Kail's long-lost brother and an agent working against the A.o.A., Kurt, who reveals that MAGAMI is a front for the A.o.A., but soon the A.o.A. arrive and threaten to turn Kail into Oinkmon, if Kurt doesn't give the Vemmon Digi-Egg to the A.o.A. This results in Kurt being turned into Oinkmon and the Vemmon Digi-Egg stolen. Junior leads an attack on the Admin Center, which results in the Game Master being defeated and interrogated. Junior uses a network break to transport himself to the Amaterasu Server, where he defeats two of the A.o.A.'s chiefs and learns more about their plans. He returns to Asuka, defeats the fourth leader, and uses an emergency teleport system to reach MAGASTA, but is unable to prevent the Juggernaut from being unleashed. The Juggernaut is then used by Vemmon to digivolve to Destromon.

Junior returns to the Amaterasu Server to defeat the final two chiefs, and gains access to Amaterasu City. He leads a fresh attack on the Amaterasu Admin Center, leading to the MAGAMI President being defeated. Junior then uses the central computer to destroy Destromon, before returning to Asuka to ask Airdramon to help him in lifting the virus which is affecting most of the players by transforming them into Oinkmon. Before long, the Oinkmon virus returns and strikes most of the players, with only Junior and Kail surviving untouched. Vemmon had used the beam containing the Oinkmon virus and shot the beam through all servers. Junior then goes into the admin center, and in the Master Room, Junior is challenged by an entity calling himself Lord Megadeath. Junior then travels to a military satellite, Gunslinger, to challenge Lord Megadeath. Once close to the control room, Junior battles Armaggeddemon, and defeats it. He then reaches the control room, and battles Lord Megadeath. Lord Megadeath is defeated, but succeeds in his project of creating Snatchmon, by combining three Vemmon. Snatchmon absorbs Lord Megadeath, challenges the player, and merges with the Gunslinger to become Galacticmon. Junior defeats him, and Galacticmon falls to Earth, burning up into a meteor shower in the atmosphere.

Three months later, Junior returns to the Amaterasu Server, where, as is revealed in the PAL and Japanese versions of the game, four new Server Leaders have been established and Kurt is the new World Champion.

You only fight bosses multiple times in the PAL version, Digimon World 2003, with Bulbmon as an exception.

Digimon exclusive to the game

Oinkmon, a Champion Level Animal Digimon in the form of a pig. When humans in the Digital World have their matrix data removed from them, they transform into this form. He first appeared when T.K and Patamon from Digimon Adventure started thinking what Patamon would become.

Cardmon, a Card Digimon that can be either Rookie, Champion, Ultimate or Mega level depending on how many cards are on it. If it has one card, it's a Rookie. If it has two cards, it's a Champion. If it has three cards, it's an Ultimate, and if it has four cards, it's a Mega. There is also a Cardmon 2. Unlike the original Cardmon's yellow color, Cardmon 2 is blue reflecting its underwater neighborhood. Its evolutions also depend on the number of cards it has; its card number-to-level correspondence is the same as Cardmon's. Cardmon 2's evolutions look completely different from the original Cardmon's, they look more like a fish.

Vemmon resembles a small alien, with two-fingered hands and reverse-jointed legs. Its whole body is a shade of purple, its helmet slightly darker than its torso. Vemmon's eyes are hidden by a black visor on its helmet, which completely covers its elongated head. A chain is attached to its neck for some unknown reason.

Vemmon, in the game, at first appears to be very weak. Its basic attack is relatively harmless, but has the annoying side-effect of stealing your Digimon's MP, preventing them from using special attacks. This means that Vemmon is somewhat of a vampire.

Vemmon's true power, however, is far more incredible. It is an artificial Digimon, created by humans as a multi-purpose weapon. Vemmon have the unique ability to combine their matrix data with technology, allowing them to turn themselves into a living embodiment of the machine they assimilate. In the game, only two ever achieve this, and both were ultimately destroyed. Late in the game four Vemmon fused in order to combine their matrix data to digivolve into Snatchmon, which is capable of completely absorbing other forms of life.

Vemmon also had an ability to turn humans into Oinkmon, a pig-like Digimon of little use or importance. After the destruction of Galacticmon, it is assumed that all Vemmon are either freed from the control of their corrupt human masters.

Snatchmon, an unknown Level Android Digimon. Its level, much like those of its higher forms such as Galacticmon, is in dispute, according to Lord Megadeath, Snatchmon is born when Vemmon has absorbed large quantities of matrix data causing it to digivolve.

Snatchmon is an antagonist. It resembles a purple humanoid, with a large visored helmet and a thick, curling tail. It broke free of its master's control and absorbed him after he refused to be a slave to anybody. Snatchmon claims to be the most powerful Digimon ever, and given his ability to merge his data matrix with technology, this may very well be true. After a short dialogue sequence, Snatchmon fuses with the Gunslinger satellite and becomes the mighty Galacticmon, the final boss of Digimon World 3.

Snatchmon's attacks are not known, but he is shown to absorb other digital lifeforms to further sustain himself.

Galaticmon, a Mega* Level Machine Digimon. Known as Ragnamon in Japan. It is the final boss of Digimon World 3.

Galacticmon is an incredibly huge cybernetic Digimon, resembling some sort of spacecraft. It is formed after the Gunslinger satellite is merged with Snatchmon and given life. Galacticmon's head alone towers over even the largest Mega Digimon, and during one cutscene it is shown in orbit above Earth, further adding emphasis to its sheer size.

Galacticmon appears to carry at least two giant missile silos in place of legs. Whether these are engines or indeed weapons is unclear. Galacticmon's tail contains a smaller head at the tip, and the tail is lined with solar panels which were once the power source of the Gunslinger. It also carries the Gunslinger's ultimate weapon, the Ragnarok Cannon, but this weapon appears to be significantly weaker than in its original state.

It appears to have a maintenance system including a skeletal metal hand which it uses to attack and block with during the fight against the head. It is not know whether the hand simply floats in space detached from the main body of the Digimon or whether it is actually connected, because it trails off into space behind the main body, where the back of it is shrouded. Also of note is that no matching right hand is visible during the fight.

After the final battle with Galacticmon, it explodes and falls to Earth as a meteor shower. Galacticmon's true plan was to merge with planet Earth to become Gaiamon.

Gaiamon a SuperMega* level Digimon, however it was never actually seen. It would have been created by the merging of Galacticmon with planet Earth, resulting in the extinction of the human race and the creation of an unimaginably powerful entity. Because it never appeared in the game, nobody knows what this enigma of a Digimon looks like. It is also quite possible that he could have been the most powerful Digimon to have ever existed.

It would have been a DNA Digivolved Digimon fused with the planet Earth, so the exact level this Digimon would have been is unknown. It is assumed to be beyond Mega, and the only level beyond Mega is a level dubbed "Super Ultimate", a level with Digimon such as Susannoomon.

Destromon, an Ultimate/Armor Level Machine Digimon. Destromon resembles an enormous, red, robotic dinosaur-like creature. This Digimon is armed with an enormous number of energy cannons on its wrists and shoulders; its main weapon is located on its chest. It is the result of the fusion between Vemmon with an experimental battleship known as "Juggernaut". Vemmon is teleported aboard the craft and fuses with it, forming the mighty Destromon. The monstrous creature makes its power known as it decimates a naval fleet with ease, before flying toward the nearest major city.

Long believed by characters of the game to be unstoppable in every way, its only weakness was discovered by the game's protagonists after defeating its controller. They shut down the terrible machine before it could completely destroy the city it was attacking, and the monstrous Digimon self-destructed.

It is impossible to fight Destromon in the game, as it only appears in cutscenes.

DRI Agents are a new feature to the games. They set the player a quest to defeat an Ultimate Level Digimon and return with its "DDNA", the reward being the Rookie form of the Ultimate being given to the player (e.g. acquiring the DDNA of MetalGreymon will allow the player to have Agumon). DRI agents will not supply the player with a duplicate of a Digimon already in their team or otherwise available, and will instead comment on how the player is raising their Digimon.

Released only in Europe, Digimon World 2003 is exactly the same as the Japanese version of Digimon World 3, where unlike the North American version, after defeating Galacticmon, Junior returns to the Amaterasu Server, which is partially fixed, to play a test game. The name change is often speculated to have been caused by the fact that Digimon World 2 was not released in Europe or Australia, so the name Digimon World 3 would not make sense.