Crimson is a strong, bright, deep red color. It is originally the color of the dye produced from a scale insect, Kermes vermilio, but the name is now also used as a generic term for those slightly bluish-red colors that are between red and rose; besides crimson itself, these colors include carmine, raspberry, ruddy, ruby, amaranth, and cerise.

Crimson (NR4) is produced using the dried bodies of the kermes insect, which were gathered commercially in Mediterranean countries, where they live on the Kermes oak, and sold throughout Europe.[2] Kermes dyes have been found in burial wrappings in Anglo-Scandinavian York. They fell out of use with the introduction of cochineal, because although the dyes were comparable in quality and color intensity it needed ten to twelve times as much kermes to produce the same effect as cochineal.

Carmine is the name given to the dye made from the dried bodies of the female cochineal, although the name crimson is sometimes applied to these dyes too. Cochineal appears to have been discovered during the conquest of Mexico by the Spaniard Hernán Cortés, and the name 'carmine' is derived from the Spanish word for crimson. It was first described by Mathioli in 1549. The pigment is also called cochineal after the insect from which it is made.

Alizarin (PR83) is a pigment that was first synthesized in 1868 by the German chemists Carl Gräbe and Carl Liebermann and replaced the natural pigment madder lake. Alizarin crimson is a dye bonded onto alum which is then used as a pigment and mixed with ochre, sienna and umber. It is not totally colorfast.

The word crimson has been recorded in English since 1400,[3] and its earlier forms include cremesin, crymysyn and cramoysin (cf. cramoisy, a crimson cloth). These were adapted via Old Spanish from the Medieval Latin cremesinus (also kermesinus or carmesinus), the dye produced from Kermes scale insects, and can be traced back to Arabic qermez ("red"), also borrowed in Turkish kırmızı and many other languages, e.g. German Karmesin, Italian Cremisi, French cramoisi, etc. (via Latin). The ultimate source may be Sanskrit कृमिज kṛmi-jā meaning "worm-made".[4]

A shortened form of carmesinus also gave the Latin carminus, from which comes carmine.

Other cognates include the Old Church Slavic čruminu and the Russian čermnyj "red". Cf. also vermilion.

Carmine dyes, which give crimson and related red and purple colors, are based on an aluminium and calcium salt of carminic acid. Carmine lake is an aluminium or aluminium-tin lake of cochineal extract, and Crimson lake is prepared by striking down an infusion of cochineal with a 5 percent solution of alum and cream of tartar. Purple lake is prepared like carmine lake with the addition of lime to produce the deep purple tone. Carmine dyes tend to fade quickly.

Carmine dyes were once widely prized in both the Americas and in Europe. They were used in paints by Michelangelo and for the crimson fabrics of the Hussars, the Turks, the British Redcoats, and the Royal Canadian Mounted Police.

Alizarin crimson is an artificially created color, used to replace the harder to obtain rose madder.

Displayed at right is the color electric crimson.

Displayed at right is the color folly.

Folly is a color one-fourth of the way between crimson and rose, closer to crimson than to rose. The first recorded use of folly as a color name in English was in 1920.[8]

Displayed at right is the color razzmatazz.

This color is a rich tone of crimson-rose.

Razzmatazz was a new Crayola crayon color chosen in 1993 as a part of the Name The New Colors Contest.

KU Crimson, along with Blue, is an official color for the University of Kansas and its athletic teams, the Kansas Jayhawks. The color is referenced in the school's alma mater.[10] While not an original color of the school, Crimson was suggested to honor a Harvard graduate who donated money for an athletic field at the school. [11]

Logo of the University of Utah

The school's athletic booster organization is called the Crimson Club.[13] 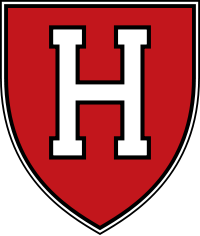 Displayed at right is the color Harvard crimson, the color which is symbolic of Harvard University.

The first recorded use of Harvard crimson as a color name in English was in 1928.[15]

The color crimson glory is displayed at right. It is a medium shade of crimson.

The color is a representation of the color of the flowers of the Crimson Glory Vine.

The first use of crimson glory as a color name in English was in 1948 when the Plochere Color System was inaugurated.

The source of the color name crimson glory is the Plochere Color System, a color system formulated in 1948 that is widely used by interior designers.[16]

OU Crimson, along with Cream, are the official colors for The University of Oklahoma, and its athletic teams, the Oklahoma Sooners. In the fall of 1895, Miss May Overstreet was asked to chair a committee to select the colors of the university. The committee decided the colors should be crimson and cream and an elaborate display of the colors was draped above a platform before the student body.[17]

OU Crimson is also an official color for the National Weather Center.[18]

At right is displayed the color red devil.

The color name red devil for this dark tone of crimson has been in use since 2001, when it was promulgated as one of the colors on the Xona.com Color List.