Chesterton is the second largest individual ward in the Borough of Newcastle-under-Lyme, of which Kidsgrove is the largest. In the 2001 census, Chesterton's population stood at 7,111. 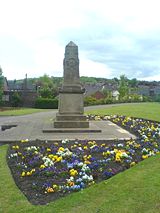 Chesterton was a parish in the Wolstanton Rural District from 1894 to 1904. Following that, it became part of the Wolstanton United Urban District until 1932, when it was added to the Borough of Newcastle-under-Lyme. The main employer in Chesterton was Holditch Colliery. The colliery employed 1,500 men and mined ironstone in addition to coal. Despite heavy investment in the 1960s and 1970s the colliery closed down in 1988, just three years after the end of the year long miners' strike. Many of the miners transferred to nearby Silvedale Colliery, which itself closed down on Christmas Eve 1998. The current site of Holditch Colliery is now a large business park with warehouses and was where a large Vodafone call centre stood until the building was vacated in November 2009.