The Cimbrian War (113–101 BC) was fought between the Roman Republic and the Proto-Germanic tribes of the Cimbri and the Teutons (Teutones), who migrated from northern Europe into Roman controlled territory, and clashed with Rome and her allies. The Cimbrian War was the first time since the Second Punic War that Italia and Rome itself had been seriously threatened.

The timing of the war had a great effect on the internal politics of Rome, and the organization of its military. The war contributed greatly to the political career of Gaius Marius, whose consulships and political conflicts challenged many of the Roman republic's political institutions and customs of the time. The Cimbrian threat, along with the Jugurthine War, inspired the landmark Marian reforms of the Roman legions.

Rome was finally victorious, and its Germanic adversaries — who had inflicted on the Roman armies the heaviest losses that they had suffered since the Second Punic War with victories at the battles of Arausio and Noreia — almost completely annihilated, with the victories at Aquae Sextiae and Vercellae.

For unknown reasons (possibly due to climate change, see Pre-Roman Iron Age), sometime around 120–115 BC, the Cimbri left their original lands around the Baltic sea in the Jutland peninsula and Southern Scandinavia. They journeyed to the southeast and were soon joined by their neighbors and possible relatives the Teutones. Together they defeated the Scordisci, along with the Boii, many of whom apparently joined them. In 113 BC they arrived on the Danube, in Noricum, home to the Roman-allied Taurisci. Unable to hold back these new, powerful invaders on their own, the Taurisci called on Rome for aid.

The following year the Roman consul Gnaeus Papirius Carbo led the legions into Noricum, and after making an impressive show of force, took up a strong defensive position and demanded that the Cimbri and their allies should leave the province immediately. The Cimbri initially set about complying peacefully with Rome's demands, but soon discovered that Carbo had laid an ambush against them. Infuriated by this treachery, they attacked and, at the Battle of Noreia, annihilated Carbo's army, almost killing Carbo in the process.

Italy was now open to invasion, yet for some reason, the Cimbri and their allies moved west over the Alps and into Gaul. In 109 BC, they invaded the Roman province of Gallia Narbonensis and defeated the Roman army there under Marcus Junius Silanus. That same year, they defeated another Roman army at Burdigala (modern day Bordeaux) and killed its commander, the consul Gaius Cassius Longinus Ravalla. In 107 BC, the Romans were defeated again, this time by the Tigurines, who were allies of the Cimbri whom they had met on their way through the Alps.

In 105 BC, Rome and its new consul Gnaeus Mallius Maximus and the proconsul Quintus Servilius Caepio, in order to settle the matter once and for all, gathered the largest force it had fielded since the Second Punic War, and possibly the largest force it had ever sent to battle. The force consisted of over 80,000 men, along with tens of thousands of support personnel and camp followers in two armies, one led by each consul.

The consuls led their armies on their own armed migration to the Rhône River near Orange, Vaucluse, where, disliking and distrusting each other, they erected separate camps on opposite sides of the river; by so doing they left their disunited force open to separate attack. The overconfident Caepio foolishly attacked without support from Maximus; his legions were wiped out and his undefended camp overrun. The now isolated and demoralized troops of Maximus were then easily defeated. Thousands more were slain trying desperately to rally and defend his poorly positioned camp. Only Caepio, Maximus, and a few hundred Romans escaped with their lives across the carnage-choked river. The Battle of Arausio was the costliest defeat Rome had suffered since Cannae and, in fact, the losses and long-term consequences were far greater. For the Cimbri and Teutones it was a great (though temporary) triumph. Instead of immediately gathering their allies and marching on Rome, the Cimbri proceeded to Hispania, while the Teutones remained in Gaul. Why they again failed to invade Italy remains a mystery. Perhaps they thought easier plunder could be found in Gaul and Spain. It is also possible that, owing to their reckless battle tactics, the Germans had suffered heavy casualties in their victories over the Romans and decided they were not yet strong enough to engage them on their home ground. Theodor Mommsen thus describes their methods of war:

Their system of warfare was substantially that of the Celts of this period, who no longer fought, as the Italian Celts had formerly done, bareheaded and with merely sword and dagger, but with copper helmets often richly adorned and with a peculiar missile weapon, the materis; the large sword was retained and the long narrow shield, along with which they probably wore also a coat of mail. They were not destitute of cavalry; but the Romans were superior to them in that arm. Their order of battle was as formerly a rude phalanx professedly drawn up with just as many ranks in depth as in breadth, the first rank of which in dangerous combats not unfrequently tied together their metallic girdles with cords.1

So with all these tactical disadvantages, they had to rely on superior numbers, their own fearsome courage, and mistakes by Roman commanders to bring them victories. Unfortunately for them, they would soon be faced with one of the greatest Roman generals at the head of a new and much deadlier army.

Following the devastation of the Arausio, fear shook the Roman Republic to its foundations. The terror cimbricus became a watchword, as Rome expected the Cimbri at its gates at any time. In this atmosphere of panic and desperation, an emergency was declared. The constitution was ignored and Gaius Marius, the victor over Jugurtha of Numidia was elected consul for an unprecedented, and arguably illegal, five years in a row, starting in 104 BC. Because of the destruction of the Roman force at Arausio and the pressure of the impending crisis, Marius was now given the latitude to construct a new army on his own terms.

Until now, the army had been a well-trained, well-regulated militia of all able-bodied, land-owning male citizens. Marius replaced this with a professional standing force composed mostly of able-bodied but landless volunteers. He improved and standardized training, weapons, armor, equipment, and command structure, and made the cohort the main tactical and administrative unit of the legion. Along with these new arrangements came new standards and symbols, such as the aquila, which the troops came to revere and which was never allowed to fall into enemy hands.

While the panicked Senate and people of Rome gave Marius the power he needed to build his army, the failure of the Cimbri and Teutones to follow up on their victory gave him the time he needed to finish it. They would soon be confronted by an army of organized, highly trained, professional soldiers under the leadership of a brilliant and ruthless commander.

By 102 BC, Marius was ready to move against the Teutones. He chose his ground carefully and built a well-fortified camp on the top of a hill near Aquae Sextiae, where he lured the Teutones and their allies the Ambrones into attacking him. During their attack they were ambushed from the rear by a select force of five cohorts which Marius had hidden in a nearby wood. The Teutones were routed and massacred and their king, Teutobod, was placed in Roman chains. But Aquae Sextiae had only evened the score: while the Teutones had been eliminated, the Cimbri remained a formidable threat. 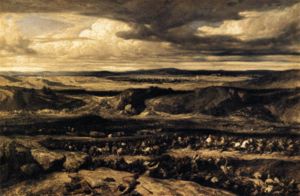 The Defeat of the Cimbri, by Alexandre Gabriel Décamps

In 101 BC, the Cimbri returned to Gaul and prepared for the final stage of their struggle with Rome. For the first time they penetrated through the Alpine passes, which Marius's co-consul for that year, Quintus Lutatius Catulus, had failed to fortify, into northern Italy. Catulus withdrew behind the Po River, leaving the countryside open to the invaders. But the Cimbri took their time ravishing the fertile region, which gave Marius time to arrive with reinforcements — his same victorious legions from Aquae Sextiae. It would be at Vercellae near the confluence of the Sesia River with the Po on the Raudine Plain where the superiority of the new Roman legions and their cavalry were clearly demonstrated. In the devastating defeat the Cimbri were virtually annihilated, and both their highest leaders, Boiorix and Lugius, fell. The women killed both themselves and their children in order to avoid slavery. Thus the war, which began with a mass migration, ended in defeat and mass suicide.

The Cimbri were not completely wiped off the face of the map or from the pages of history. A small remnant population of Cimbri and Teutones remained in northern Jutland, southern Scandinavia and the Baltic coast at least until the 1st century. Their allies, the Boii, with whom they intermixed, settled in southern Gaul and Germania and were there to welcome and confront Julius Caesar, Marius's nephew, in his campaigns of conquest.

The political consequences from the war had an immediate and lasting impact on Rome. The end of the Cimbrian war marked the beginning of the rivalry between Marius and Sulla, which eventually led to the first of Rome's great civil wars. Moreover, following the final victory at Vercellae, and without first asking permission from the Senate, Marius granted Roman citizenship to his Italian allied soldiers, claiming that in the din of battle he could not distinguish the voice of Roman from ally from the voice of the law. Henceforth all Italian legions became Roman legions and the allied cities of the Italian peninsula progressively began to demand a greater say in the external policy of the Republic, leading eventually to the Social War.