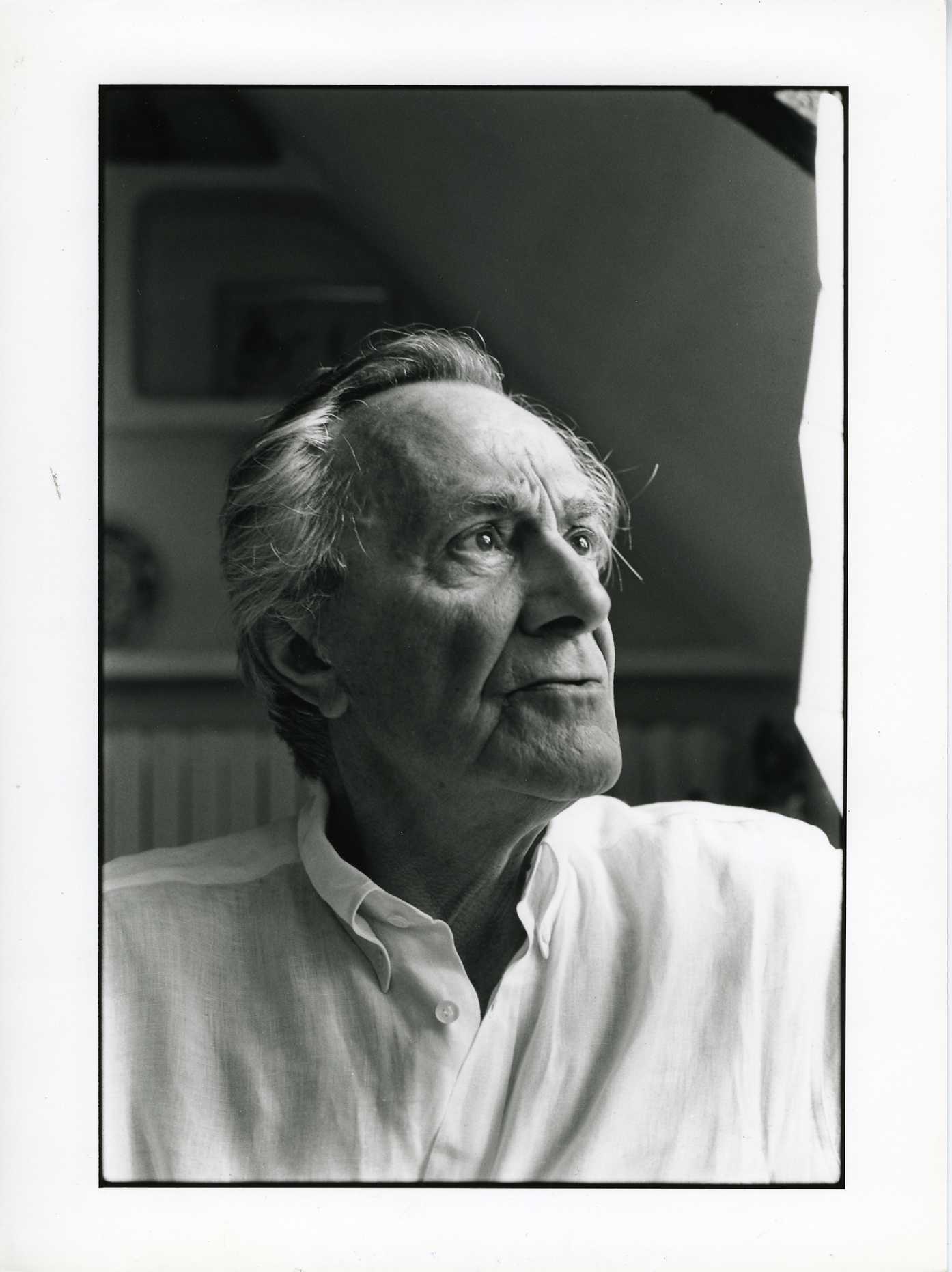 Jean-François Lyotard (pronounced|ʒɑ̃ fʀɑ̃swa ljɔˈtaʀ; ndash ) was a French philosopher and literary theorist. He is well-known for his articulation of after the late 1970s and the analysis of the impact of on the .

He was born in 1924 in , France to Jean-Pierre Lyotard, a sales representative, and Madeleine Cavalli. He went to primary school at the Paris and and later began studying philosophy at the . After graduation, in 1950, he took up a position teaching philosophy in Constantine in French-occupied East Algeria. Lyotard earned a Ph.D in literature. He married twice: in 1948 to , with whom he had two daughters, and for a second time in 1993 to the mother of his son, who had been born in 1986.

In 1954 Lyotard became a member of , a French political organisation formed in 1948 around the inadequacy of the analysis to explain the new forms of domination in the Soviet Union. His writings in this period are mostly concerned with ultra-left politics, with focus on the Algerian situation which he witnessed first hand while teaching philosophy in Constantine. [cite book |last= Lyotard |first= Jean-François |title="The Name of Algeria" in Political Writings | publisher=UCL Press | year=1993 | pages=165-170] "Socialisme ou Barbarie" became increasingly anti- and Lyotard was prominent in the , a group that rejected the position and split in 1963. [cite journal |last= Lefort |first= Claude |authorlink=Claude Lefort |title=An Interview | journal=Telos | year=1977 | issue=30|pages=177]

In the early 1970s Lyotard began teaching at the , Vincennes until 1987 when he became Professor Emeritus. During the next two decades he lectured outside of France notably as a Professor of Critical Theory at the and as visiting professor at universities around the world including John Hopkins, Berkeley, Yale and San Diego in the States, the in Canada and the in Brazil. He was also a founding director and council member of the , Paris. Before his death, he split his time between Paris and Atlanta, where he taught at as a Woodruff Professor of Philosophy and French.

Lyotard repeatedly returned to the notion of the Postmodern in essays gathered in English as "", "", and "". In 1998, while preparing for a conference on Postmodernism and Media Theory, he died unexpectedly from a case of leukemia that had advanced rapidly. He is buried in in Paris.

Lyotard's work is characterised by a persistent opposition to universals, s, and generality. He is fiercely critical of many of the 'universalist' claims of , and several of his works serve to undermine the fundamental principles that generate these broad claims.

In his writings of the early 1970s, he rejects what he regards as theological underpinnings of both Marx and Freud: "In Freud, it is judaical, critical sombre (forgetful of the political); in Marx it is catholic. Hegelian, reconciliatory (...) in the one and in the other the relationship of the economic with meaning is blocked in the category of representation (...) Here a politics, there a therapeutics, in both cases a laical theology, on top of the arbitrariness and the roaming of forces" [cite journal |last= Lyotard |first=Jean-François |title=Adorno as the Devil | journal=Telos | year=1974 | issue=19|pages=134-5] Consequently he rejected Adorno's negative dialectics which he regarded as seeking a "therapeutic resolution in the framework of a religion, here the religion of history". [cite journal |last= Lyotard |first=Jean-François |title=Adorno as the Devil | journal=Telos | year=1974 | issue=19|pages=126] In Lyotard's "libidinal economics" (the title of one of his books of that time), he aimed at "discovering and describing different social modes of investment of libidinal intensities". [cite journal |last= Hurley |first=Robert |title=Introduction to Lyotard | journal=Telos | year=1974 | issue=19|pages=124]

The collapse of the "Grand Narrative"

Most famously, in "" (1979), he proposes what he calls an extreme simplification of the "postmodern" as an 'incredulity towards meta-narratives'. [cite book |last= Lyotard |first= Jean-François |title=La Condition Postmoderne: Rapport sur le Savoir | publisher=Les Editions de Minuit | year=1979 | pages=7] These meta-narratives - sometimes 'grand narratives' - are grand, large-scale theories and philosophies of the world, such as the progress of history, the knowability of everything by science, and the possibility of absolute freedom. Lyotard argues that we have ceased to believe that narratives of this kind are adequate to represent and contain us all. We have become alert to difference, diversity, the incompatibility of our aspirations, beliefs and desires, and for that reason postmodernity is characterised by an abundance of micronarratives. For this concept Lyotard draws from the notion of '' found in the work of .

In Lyotard's works, the term 'language games', sometimes also called 'phrase regimens', denotes the multiplicity of communities of meaning, the innumerable and incommensurable separate systems in which meanings are produced and rules for their circulation are created.

This becomes more crucial in "Au juste: Conversations ()" (1979) and "Le Différend (The Differend)" (1983), which develop a postmodern theory of justice. It might appear that the atomisation of human beings implied by the notion of the micronarrative and the language game suggests a collapse of ethics. It has often been thought that universality is a condition for something to be a properly ethical statement: 'thou shalt not steal' is an ethical statement in a way that 'thou shalt not steal from Margaret' is not. The latter is too particular to be an ethical statement (what's so special about Margaret?); it is only ethical if it rests on a universal statement ('thou shalt not steal from anyone'). But universals are impermissible in a world that has lost faith in metanarratives, and so it would seem that ethics is impossible. Justice and injustice can only be terms within language games, and the universality of ethics is out of the window. Lyotard argues that notions of justice and injustice do in fact remain in postmodernism. The new definition of injustice is indeed to use the language rules from one 'phrase regimen' and apply them to another. Ethical behaviour is about remaining alert precisely to the threat of this injustice, of paying attention to things in their particularity and not enclosing them within abstract conceptuality. One must bear witness to the 'differend'.

Lyotard was a frequent writer on matters. He was, despite his reputation as a postmodernist, a great promoter of . Lyotard saw 'postmodernism' as a latent tendency within thought throughout time and not a narrowly-limited historical period. He favoured the startling and perplexing works of the high modernist avant-garde. In them he found a demonstration of the limits of our conceptuality, a valuable lesson for anyone too imbued with Enlightenment confidence. Lyotard has written extensively also on few contemporary artists of his choice: , , and , as well as on and .

He developed these themes in particular by discussing the sublime. The "sublime" is a term in aesthetics whose fortunes revived under postmodernism after a century or more of neglect. It refers to the experience of pleasurable anxiety that we experience when confronting wild and threatening sights like, for example, a massive craggy mountain, black against the sky, looming terrifyingly in our vision.

Lyotard found particularly interesting the explanation of the sublime offered by in his "" (sometimes "Critique of the Power of Judgment"). In this book Kant explains this mixture of anxiety and pleasure in the following terms: there are two kinds of 'sublime' experience. In the 'mathematically' sublime, an object strikes the mind in such a way that we find ourselves unable to take it in as a whole. More precisely, we experience a clash between our reason (which tells us that all objects are finite) and the imagination (the aspect of the mind that organises what we see, and which sees an object incalculably larger than ourselves, and feels infinite). In the 'dynamically' sublime, the mind recoils at an object so immeasurably more powerful than we, whose weight, force, scale could crush us without the remotest hope of our being able to resist it. (Kant stresses that if we are in "actual" danger, our feeling of anxiety is very different from that of a sublime feeling. The sublime is an aesthetic experience, not a practical feeling of personal danger.) This explains the feeling of anxiety.

The feeling of pleasure comes when human reason asserts itself. What is deeply unsettling about the mathematically sublime is that the mental faculties that present visual perceptions to the mind are inadequate to the concept corresponding to it; in other words, what we are able to make ourselves see cannot fully match up to what we know is there. We know it's a mountain but we cannot take the whole thing into our perception. What this does, ironically, is to compel our awareness of the supremacy of the human reason. Our sensibility is incapable of coping with such sights, but our reason can assert the finitude of the presentation. With the dynamically sublime, our sense of physical danger should prompt an awareness that we are not just physical material beings, but moral and (in Kant's terms) beings as well. The body may be dwarfed by its power but our reason need not be. This explains, in both cases, why the sublime is an experience of pleasure as well as pain.

Lyotard is fascinated by this admission, from one of the philosophical architects of the Enlightenment, that the mind cannot always organise the world rationally. Some objects are simply incapable of being brought neatly under concepts. For Lyotard, in "", but drawing on his argument in "The Differend", this is a good thing. Such generalities as 'concepts' fail to pay proper attention to the particularity of things. What happens in the sublime is a crisis where we realise the inadequacy of the imagination and reason to each other. What we are witnessing, says Lyotard, is actually the differend; the straining of the mind at the edges of itself and at the edges of its conceptuality.

Some argue that Lyotard's theories may seem self-contradictory because "The Postmodern Condition" seems to offer its own grand narrative in the story of the decline of the metanarrative. Against this it can be argued that Lyotard's narrative in "The Postmodern Condition" declares the decline of only a few defunct "narratives of legitimation" and not of narrative knowledge itself. It is not logically contradictory to say that a statement about narratives is itself a narrative, just as when Lyotard states that "every utterance [in a language game] should be thought of as a 'move' in a game" [cite book |last= Lyotard |first= Jean-François |title=La Condition Postmoderne: Rapport sur le Savoir | publisher=Les Editions de Minuit | year=1979 | pages=23, English version at [http://www.marxists.org/reference/subject/philosophy/works/fr/lyotard.htm] ] his statement is itself a 'move' in a language game.

See also the critical analysis of in his book 'The Condition of Postmodernity' (Blackwell, 1989). Harvey's materialistic perspective finds traits of postmodernity to be rooted in the large-scale shifts from Fordist to flexible accumulation through a period of pronounced '' taking place in conjunction with the technological advances happening roughly around the 1970s. Far from being liberating, postmodernity draws us into ever more chaotic and disruptive spirals of accumulation that are ultimately as damaging as the Enlightenment project.

An [http://lyotard.free.fr international symposium about Jean-François Lyotard] organized by the Collège International de Philosophie was held in Paris on January, 25-27th 2007.