A distributed Bragg reflector (DBR) is a reflector used in waveguides, such as optical fibers. It is a structure formed from multiple layers of alternating materials with varying refractive index, or by periodic variation of some characteristic (such as height) of a dielectric waveguide, resulting in periodic variation in the effective refractive index in the guide. Each layer boundary causes a partial reflection of an optical wave. For waves whose wavelength is close to four times the optical thickness of the layers, the many reflections combine with constructive interference, and the layers act as a high-quality reflector. The range of wavelengths that are reflected is called the photonic stopband. Within this range of wavelengths, light is "forbidden" to propagate in the structure. 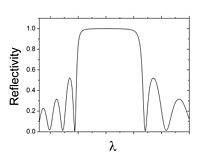 The DBR's reflectivity, R, for intensity is approximately given by [1]

The bandwidth Δλ0 of the photonic stopband can be calculated by

where λo is the central wavelength of the band.

Increasing the number of pairs in a DBR increases the mirror reflectivity and increasing the refractive index contrast between the materials in the Bragg pairs increases both the reflectivity and the bandwidth. A common choice of materials for the stack is titanium dioxide (n≈2.5) and silica (n≈1.5).[2] Substituting into the formula above gives a bandwidth of about 200 nm for 630 nm light.

Distributed Bragg reflectors are critical components in vertical cavity surface emitting lasers and other types of narrow-linewidth laser diodes such as distributed feedback lasers. They are also used to form the cavity resonator (or optical cavity) in fiber lasers and free electron lasers. 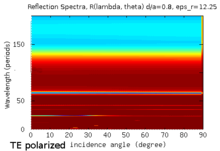 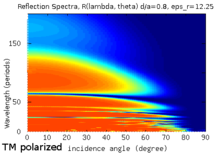 This section discusses the interaction of transverse electric (TE) and transverse magnetic (TM) polarized light with the DBR structure, over several wavelengths and incidence angles. This reflectivity of the DBR structure (described below) was calculated using the transfer-matrix method (TMM), where the TE mode alone is highly reflected by this stack, while the TM modes are passed through. This also shows the DBR acting as a polarizer.

This DBR is also a simple example of a 1D photonic crystal. It has a complete TE band gap, but only a pseudo TM band gap.