China spans across five different standard time zones, from UTC+05:00 in the west to UTC+09:00 in the east, yet since 1949 China has only had a single standard time at UTC+08:00. The time UTC+06:00 is also used unofficially in Xinjiang and Tibet. Historically under the Republic of China it was divided into five time zones. 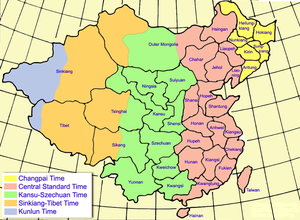 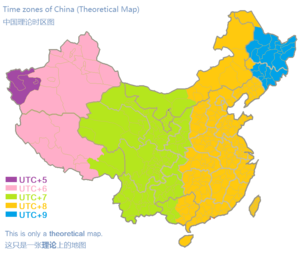 A (theoretical) map of the times zones of the People's Republic of China, before enforcing Beijing Time nationwide.

Time zones were first set up and made official in China in 1912 under the Republic of China. The country was divided into five time zones, namely GMT+5.5, GMT+6, GMT+7, GMT+8 and GMT+8.5. Before that, time varied, while astrological predictions were conducted according to the time standard based on the locations of then capitals of the imperial dynasties.[citation needed] A summer time was observed in 1919 in Tianjin and Shanghai, and parts of China from 1935 to 1962.[citation needed]

Until 1997, Hong Kong and 1999, Macau had, respectively, been colonies of the United Kingdom and Portugal. Despite being part of the People's Republic of China today, as special administrative regions they have retained their own policies regarding time zones over the respective regions. Due to their geographical locations, both are within the GMT/UTC+8 time zone.

After the Chinese Civil War, in 1949, a unified time zone — GMT+8 — was established by the People's Republic of China for all its territories, called Beijing Time (sometimes known as Chinese Standard Time). Daylight saving time was observed from 1986 to 1991.[1]

The unified time zone policy was adopted by the Communist Party of China or the People's Republic government some time between 27 September 1949, and 6 October 1949; the exact date is unknown. However, recent research suggests that the policy was most likely adopted on 27 September 1949.[2]

Although the only official time zone in the PRC is Beijing Time, the People's Congress of Xinjiang Uyghur Autonomous Region, due to its geographical location in the westernmost part of the country, proclaimed Ürümqi Time (UTC+6), two hours behind Beijing. Although this is not officially recognized, it is the time observed locally by most residents. Most stores and government offices in Xinjiang have modified opening hours, commonly running from 10am to 7pm Beijing Time. Times for buses, trains, and other public transportation are often given in Xinjiang time, regardless of the ethnicity of the speaker.[3]

As a Special Administrative Region, Hong Kong maintains its own time. The Hong Kong Time is UTC+08:00 year round, without daylight saving observation. Greenwich Mean Time was adopted as the basis in 1904, and UTC was adopted as a standard in 1972. Before that, local time was determined by astronomical observations at the Hong Kong Observatory using a 6-inch Lee Equatorial and a 3-inch Transit Circle.

As a Special Administrative Region Macau maintains its own time. Macao Standard Time[4] (Chinese: 澳門標準時間; Portuguese: Hora Oficial de Macau[5] ) is the time in Macau. The time is UTC+08:00 all year round, and daylight saving time is not applied. There was daylight saving time in the past.[citation needed]

Current and former Chinese territory is covered in the tz database by the following zones. 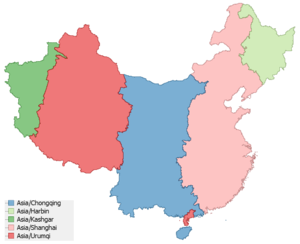 Map showing the tz database time zones in the PRC.

Columns marked with * are from the tz database.