It was introduced with the BBC Television Service in 1936, suspended for the duration of World War II, and remained in operation in the UK until 1985, and was also used between 1961 and 1982 in Ireland as well as from 1957 to 1973 for the Rediffusion Television cable service in Hong Kong.

Sometimes called the Marconi-EMI system, it was developed in 1934 by the EMI Research Team led by Sir Isaac Shoenberg. The figure of 405 lines had been chosen following discussions over Sunday lunch at the home of Alan Blumlein.[1] The system was the first broadcast system in Britain to use interlacing, though EMI had been experimenting with a 243 line all-electronic interlaced system since 1933. In the 405 system the scanning lines were broadcast in two complementary fields, 50 times per second, creating 25 frames per second. Of the 405 lines, 377 were used for the image. By today's DVB nomenclature standards, it could be called 377i except that 405 line has never been broadcast or recorded digitally.

Though at the time of its introduction the 405-line system was referred to as "high definition", that was in relation to the crude mechanical television systems that preceded it; this should not be confused with modern-day high-definition television. 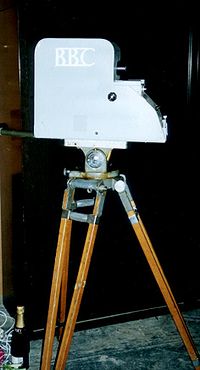 A mock-up of a 1930s EMI Emitron 405-line television camera, constructed for the 1986 BBC drama Fools on the Hill.

In 1934 the British government set up a committee (the "Television Committee") to advise on the future of TV broadcasting. The committee recommended that a "high definition" service (defined by them as being a system of 240 lines or more) to be run by the BBC be established. The recommendation was accepted and tenders were sought from industry. Two tenders were received: one from the Baird company offering a 240 line mechanical system, and the other from EMI offering a 405-line all-electronic one. The Television Committee advised that they were unable to choose between the two systems and that both tenders should be accepted, the two systems to be run together for an experimental period.

Broadcasting of the resulting BBC Television Service from their Alexandra Palace site began in November 1936, at first time-sharing broadcasts with the 240-line Baird system; however, after three months of trials (in January 1937) the Baird system was abandoned in favour of exclusive broadcasting with the 405-line Marconi-EMI system on VHF. This became the standard for all British TV broadcasts until the 1960s.

It soon became apparent that television reception was also possible well outside the original intended service area. In February 1938, engineers at the RCA Research Station, Riverhead, Long Island, New York, in the USA, were able to receive the BBC signal 5,000 km (3,100 mi) away, due to the signal being "bounced" back to earth from the ionosphere. A few minutes of programming were recorded on 16 mm movie film. This is now considered to be the only surviving example of pre-war, live British television.[2] The images recorded included Jasmine Bligh and a brief shot of Elizabeth Cowell, two of the original three BBC announcers, an excerpt from an unknown period costume drama, and the BBC's station identification transmitted at the beginning and end of the day's programmes.

The BBC temporarily ceased transmissions on September 1, 1939 the day of the German invasion of Poland, as war was imminent. After the BBC Television Service recommenced in 1946, distant reception reports were received from various parts of the world, including Italy, South Africa, India, the Middle East, North America and the Caribbean.

In 1954 the BBC lost its monopoly of the British television market, and the following year the commercial network ITV, comprising a consortium of regional companies, was launched.

Some ITV companies, notably Lew Grade's ATV, proposed broadcasting in colour using a 405-line variation on the NTSC system, but after some trials in 1955-1956 [3] on its Alexandra Palace then on its Crystal Palace 405 lines transmitters the BBC persuaded the Government that colour should await the introduction of a higher-definition system.

In 1964 the BBC launched its BBC2 service on UHF using only a 625-line system, which older sets could not receive. PAL colour was introduced in 1967.

In November 1969 BBC1 and ITV also started broadcasting in 625-line PAL colour on UHF. As their programming was now entirely produced using the new standard, the 405-line broadcasts served only as a rebroadcast in monochrome for people who did not have the newer receivers.

One reason for the long switchover period was the difficulty in matching the coverage level of the new UHF 625 line service with the very high level of geographic coverage achieved with the 405-line VHF service.

The last 405-line transmissions were seen on January 3, 1985, in Scotland, having been shut down one day earlier in the rest of the UK. This left only the UHF PAL system in operation in the UK. The frequencies used by the 405-line system were initially left empty, but were later sold off, used now for other purposes including DAB and trunked PMR commercial two way radio systems.

Ireland's use of the 405-line system began only in 1961, with the launch of Telefís Éireann, but extended solely to two transmitters and five relays of them, serving the east and north of the country where many people had sets for receiving broadcasts from Wales or Northern Ireland. Telefís Éireann (later to become RTÉ One) was also simulcast on 625-line from the summer of 1962 onwards, two years before the BBC had any 625 channels.

The 405-line system was used in the Rediffusion Television cable television service in Hong Kong, established in 1957, making it both the first British colony and the first predominantly Chinese city to have television. The service of 405-line system ended in 1973, replaced by 625-line PAL system free-to-air broadcast.

In 1939 there was also (briefly) experimental 405 line transmissions from stations in Montrouge, France and Eindhoven, Netherlands # Czechoslovakia and Switzerland [1]

A few 405-line videotapes still survive. However, the majority of surviving 405-line programmes are in the form of black and white film telerecordings, usually with optical soundtracks.

405-line is system A in the CCIR assignment of broadcast systems. The audio uses Amplitude Modulation rather than the Frequency Modulation in use on modern analogue systems. In addition, the system was broadcast in an aspect ratio of 5:4 until 3 April 1950 when it changed to the more common 4:3 format.[4]

All System A transmitters used vestigial sideband transmission, with the single exception of Alexandra Palace in London, which closed down in 1957 when it was replaced by Crystal Palace.

Why 50 fields per second

Since the mid-1930s it has been standard practice to use a field frequency equal to the AC mains electric supply frequency (or a submultiple thereof) 50 Hz in most countries (60 Hz in the Americas) because studio lighting generally uses alternating current lamps and if these were not synchronized with the field frequency, an unwelcome strobe effect could appear on TV pictures. Secondly the smoothing (filtering) of power supply circuits in early TV receivers was rather poor and ripple superimposed on the DC could cause visual interference. However, the main problem was the susceptibility of the electron beam in the CRT being deflected by stray magnetic fields from nearby transformers or motors.[citation needed] If the picture was locked to the mains frequency, this interference would at least be static on the screen and thus relatively unnoticeable.

Because an interlaced system requires accurate positioning of scanning lines, it is important to make sure that the horizontal and vertical timebase are in a precise ratio. This is accomplished by passing the one through a series of electronic divider circuits to produce the other. Each division is by a prime number. Therefore, there has to be a straightforward mathematical relationship between the line and field frequencies, the latter being derived by dividing down from the former. Technology constraints of the 1930s meant that this division process could only be done using small integers, preferably no greater than 7, for good stability. The number of lines was odd because of 2:1 interlace. The 405 line system used a vertical frequency of 50 Hz (Standard AC mains supply frequency in Britain) and a horizontal one of 10,125Hz (50 × 405 ÷ 2), with 405 being derived from (3 × 3 × 3 × 3 × 5).

When used with vestigial sideband filtering the total bandwidth of a 405-line TV channel is 5 MHz, significantly less than the 8 MHz required by the 625-line system I, which replaced it in Britain. Systems in other countries used anything between six and fourteen megahertz of bandwidth per channel.

The use of VHF frequencies combined with the narrow vision bandwidth (AM signals [at VHF low band frequencies] are less affected by noise as bandwidth is reduced) meant that 405-line signals could be received well even under marginal conditions. Therefore it was possible to cover virtually all of the UK with a relatively small number of transmitting stations.

The use of AM (rather than FM) for sound and the use of positive (rather than negative) video modulation made 405-line signals very susceptible to impulse interference, such as that generated by the ignition systems of vehicles. Such interference manifested itself as a loud popping on sound and large bright spots on the picture which viewers found a lot more noticeable than the dark spots encountered when such interference is encountered on a signal using negative video modulation. Further, the amplitude of any interference would quickly match the amplitude of the sync pulses rendering them indistinguishable from the noise. With negative modulation, the amplitude of the interference would have to be much larger to match the sync pulses (which were represented by peak carrier power). If they were able to do this, the picture had already become unwatchable.

The AGC circuit had to detect the average value of the transmitted signal (In the positively modulated carrier, peak power represented peak white - not guaranteed to be present in any picture). Thus for a completely black picture, the AGC circuit increased the RF gain to restore the average carrier amplitude. The result was a screen that was not black but mid grey. In fact the total light output of early TV sets was practically constant regardless of the picture content. The introduction of negative modulation in later systems solved this problem because peak carrier power represented sync pulses, something guaranteed to be present. It was only necessary to gate the AGC circuit so that it only detected the amplitude of the sync pulses.

The 405-line system produced a noticeable 10,125 Hz whistle in many sets, equal to the number of lines per second. This high-pitched whistle is caused by magnetostriction in the line output transformer.

This is a common artifact in sets that use a cathode ray tube. While all CRT-based television systems produce such a noise, the higher number of lines per second in later standards produce frequencies (PAL's 15,625 Hz and NTSC's 15,734 Hz) that are at the upper end of the audible spectrum, and which not all people are able to hear. Modern sets using plasma, LCD or even LED displays are completely free of this effect as there is no requirement to generate the scanning signal.

On some larger TV screen sizes, the scanned lines were not fat enough to give 100% coverage of the CRT. The result was a lined picture with darkness between each horizontal scanned line, reducing picture brightness and contrast. Larger screen sets often used a spot wobble oscillator that slightly elongated the scanning spot vertically at high frequency to avoid this line separation effect without reducing horizontal sharpness.

During the late 1950s and early-mid 1960s some experimental colour broadcasts were made in the UK using the 405-line system using NTSC colour encoding. The subcarrier frequency was 2.6578125 MHz (525/2 times line frequency) with an "I" signal bandwidth of 500 kHz and a "Q" signal bandwidth of 300 kHz. Tests with PAL, SECAM and other NTSC subcarrier frequencies were also attempted.[6]

Some of these broadcasts were on UHF (also an experimental technology at the time), while others were carried over the regular VHF network outside of normal broadcasting hours.