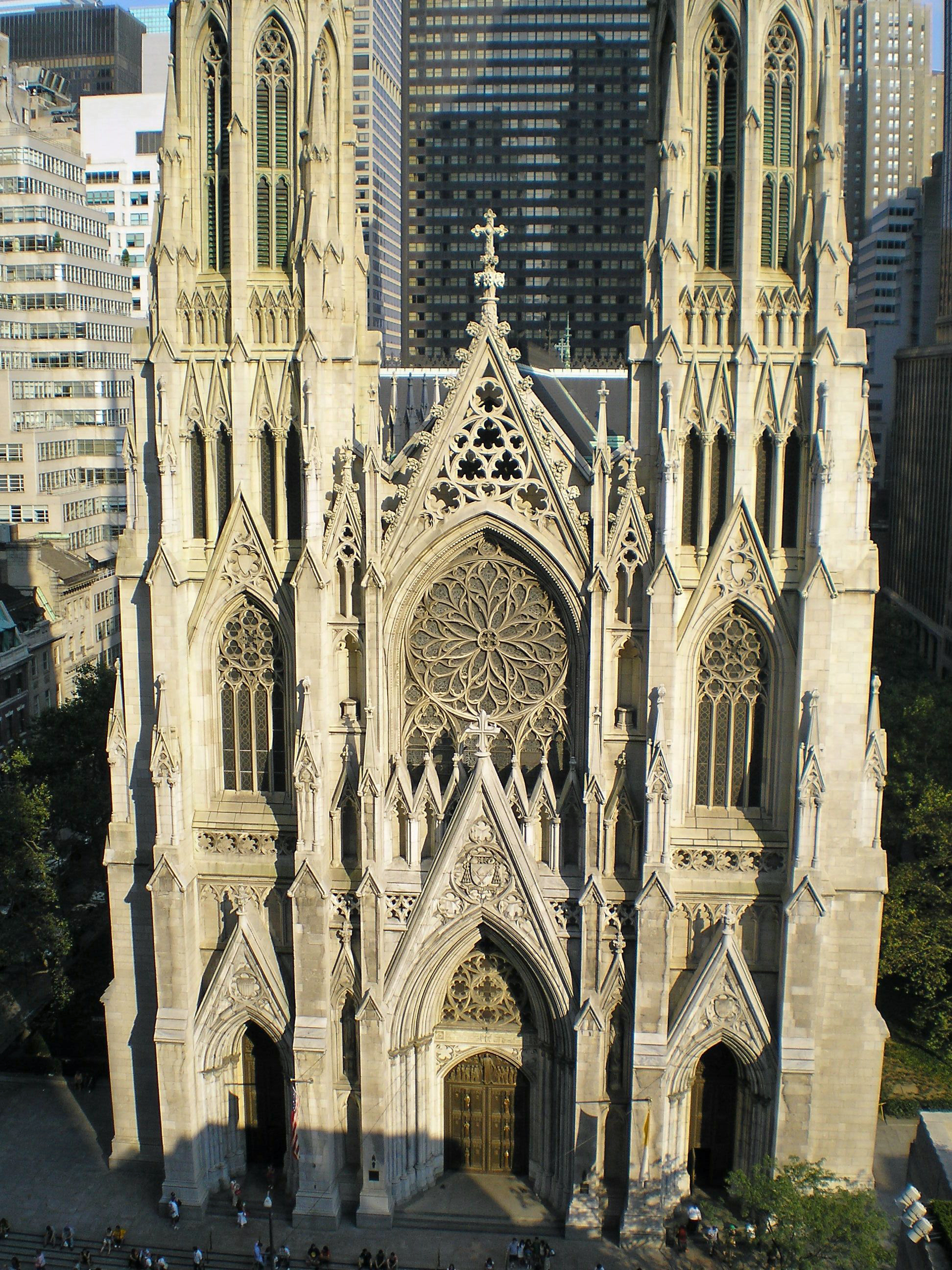 St. Patrick's Cathedral is a
decorated Neo-Gothic-style Catholic in North America. It is the seat of the of the , and a , located on the east side of Fifth Avenue between 50th and 51st Streets in . It faces .

Purchase of the property

The land on which the present cathedral sits was purchased for $11,000 on , as a site for a school for young Catholic men to be conducted by the Jesuits. This school failed, and in 1813 the land was sold again to Dom , abbot of a community of (from the original monastery of La Trappe) who came to America fleeing persecution by French authorities. In addition to a small monastic community, they also looked after some 33 orphans. With the downfall of Napoleon in 1814, the Trappists returned to France, abandoning the property. The orphanage was maintained by the Diocese of New York into the late 1800s. Some of the monks resettled to Canada and eventually founded in Spencer.

Construction of the cathedral

The Diocese of New York, created in 1808, was made an by on , . On , , Archbishop announced his intention to erect a new cathedral to replace the Old St. Patrick's Cathedral in . The "Old Cathedral" had been destroyed by fire in but was rebuilt and rededicated by 1868.

The new cathedral was designed by in the Gothic Revival style. The was laid on , , just south of the diocese's . At that time, was far north of the populous areas of New York City.

Work was begun in 1858 but was halted during the Civil War and resumed in 1865. The cathedral was completed in 1878 and dedicated on , , its huge proportions dominating the midtown of that time. The archbishop's house and were added from 1882 to 1884, and an adjacent school (no longer in existence) opened in 1882. The Towers on the West Facade were added in 1888, and an addition on the east, including a , designed by , was begun in 1901. The windows in the Lady Chapel were designed and made in , England by Paul Vincent Woodroffe between 1912 and 1930. The cathedral was renovated between 1927 and 1931, when the great organ was installed and the sanctuary enlarged.

The cathedral and associated buildings were declared a in 1976.

‎
*The cathedral is built of white quarried in and and can accommodate 2,200 people.
*The cathedral is bounded by East 51st Street to the north, Madison Avenue to the east, East 50th Street to the south, and Fifth Avenue to the west.
*The s rise 330 feet (100 meters) from street level.
*The windows were made by artists in , Birmingham and Boston. The great is one of 's major works.
*The and St. Louis altar was designed by . The St. Elizabeth altar was designed by of Rome.
*The altar remains one of the few original side chapel altars commemorating the patron saint of catechists and teachers. The adjoining stain glass window depicts the Bull of Approbation granted by the to the Institute of the who, since 1848, have conducted numerous parish grade and high schools throughout the , as well as and Lincoln Hall.
*The cathedral's won a prize for artistry at the in Chicago in 1893.
*The is three times larger than Michelangelo's "Pietà". It was sculpted by Araldo Perugi, who immigrated from Carrara, Italy.
*A bust of is located in the rear of the cathedral, commemorating his visit to the city in 1979.
*Archbishop , later cardinal, undertook a major renovation of the main altar area of the cathedral in the late 1930s and early 1940s. The bronze in the sanctuary is part of this work, and the former high altar and reredos that stood there were removed and replaced. The original High Altar of St. Patrick's is now in the University Church of at Rose Hill in (Spellman's ). Coincidentally, that church, built in the 1830s, is also home to stained glass windows donated by of France for the Old St. Patrick's Cathedral downtown when it was originally being built. The windows were installed in the Fordham church when it was discovered that they did not fit in the Old St. Patrick's. Clendenin James Ryan donated the Rose window. He was the grandson of Thomas Fortune Ryan and Ida Barry Ryan who built St Jean Baptist on 78th and Park Avenue.
* In the 1980s, undertook further renovation work, most notably the construction of a new stone altar in the middle of the sanctuary, closer and more visible to the congregation. It was built from sections of one of the side altars that was removed to reposition the baptismal font in the north transept.
* The roof is made from slate from .

The original s, built by George Jardine & Son in the 19th century, have been replaced. The Chancel Organ, in the north , was made by the St. Louis firm of George Kilgen & Son, and installed in 1928. It has 39200 pipes. The Grand Gallery Organ, by the same company, was installed in 1930, and has 5918 pipes. [http://www.nycago.org/Organs/NYC/html/StPatrickCath.html]

The combined organs, totaling 177 stops and 9838 pipes, can be played from either of two five-manual consoles installed in the early 1990s to replace the original Kilgen consoles.

*The eight past cardinals, aof the cathedral. Four cardinals' "s" are located high above the back of the sanctuary. Cardinal Spellman's galero was also worn by when he was cardinal. had Toussaint's remains moved from the cemetery of St. Patrick in the crypt below the main altar of the present St. Patrick's thedral. The process of canoniza of Pierre Toussaint is underway.

Archbishop Cardinals Spellman and , is also buried in the crypt, along with Msgr. Michael J. Lelle, of the cathedral in the 1900s. An unverified Lavelle died, Lavelle entombed there as well. because of the presence of the tombs of three candidates for canonization &mdash; it is possible to obtain such as to pray for a special intentions.

Some notable people whose funeral Masses were said at the cathedral include greats and , legendary football coach and , singer , United States Senator from New York , and owner . Special memorial Masses were held at St. Patrick's following the deaths of , , and author .

In , approximately 5,000 s arrived at St. Patrick's Cathedral during Mass in a demonstration directed toward the Roman Catholic Archdiocese's public stand against education and distribution in the public elementary schools, as well as its opposition to . [ACT UP. [http://www.actupny.org/YELL/stopchurch99.html 10 Year Anniversary of "Stop the Church"] Accessed 4 July 2007.] A short documentary about the protest, titled "Stop the Church", was originally scheduled to air on PBS. The documentary was eventually dropped from national broadcast by PBS, but still aired on stations in several major cities including New York, and . [Steinfels, Peter. (September 13, 1991) [http://query.nytimes.com/gst/fullpage.html?sec=health&res=9D0CEFDE1739F930A2575AC0A967958260 Channel 13 to Show Film on AIDS Protest] "". Accessed 4 July 2007.]

The cathedral, and the gravestones are featured in song "When Fondness Makes the Heart Grow Absent" from the album "".

Progressive band 's 1991 album "" features a song called "St. Patrick's" during which the main character, DT Jesus, speaks to God in the cathedral demanding an explanation for his misfortunes.

In , radio "" broadcast a couple having sex in a vestibule in the cathedral. The DJs were suspended from WNEW-FM a week later and their show was subsequently cancelled. [ [http://www.thesmokinggun.com/archive/jimkoch1.html The Smoking Gun: Archive ] ]

The cathedral appeared on the movie "Spider-Man", when saves and leaves her on a roof-garden near the cathedral.

The underground ruins were the setting for the climax of "" where Taylor destroyed the Earth with the Alpha-Omega bomb.

The cathedral was used as the venue for the wedding of Wilhelmina Slater to Bradford Meade in hit ABC prime-time show "".

The cathedral ranked 11th out of 150 buildings in the recent list of America's Favorite Architecture. [ [http://favoritearchitecture.org/afa150.html FavoriteArchitecture.org] ] 17499