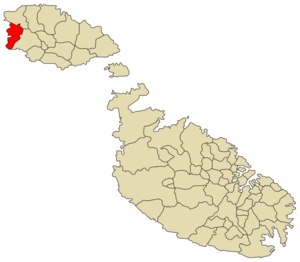 Saint Lawrence (Maltese: "San Lawrenz") is a village on the Isle of , , it's name is derived from who is the for the village. The natural reserve is administratively part of the town, as is the famous landmark.

It is built on a plain surrounded by three hills, , and . The last mentioned, Ta' Dbieġi, rises 195 metres above sea level and is Gozo's highest point. In the limits of San Lawrenz there is also the splendid bay of , renowned for its strange geological faults and admired by tourists and locals alike.

This picturesque village has succeeded in retaining its traditional and rural lifestyle. It has managed to open up to progress without sacrificing its natural beauty and those values and traditions, which form the identity of this charming village.

San Lawrenz is one of the two Gozitan localities that have taken their name from that of their patron saint. The other is the nearby hamlet of . San Lawrenz was established a parish on 15 March . Before this date, the area was known as . Most probably the site derived its name from a local family name or nickname. The date of origin of this area is not known. However the name Ta' Ċangura can be dated back to before the tragic , that is, before July 1551.

Until San Lawrenz was declared a parish in 1893, it formed part of the neighbourhood of . However as time went by the people of San Lawrenz started to form a separate community and as a result they wanted their own church. The foundation stone for this new church was laid and consecrated by the Bishop Peter Pace on 21 November 1886. The relic of Saint Lawrence was placed under this stone. Every villager participated with great enthusiasm in the building of the church.

The village feast of San Lawrenz is celebrated each year, unimaginatively in the warmest part of our Summer, namely around the first week of August.

With a population of just 599 people (as of ), it is the second least populated village on Gozo and third least in all of the . The village's football team is called St. Lawrence Spurs.

The village is twinned with the following:
*flagicon|Italy

Other Streets at San Lawrenz