A Beer Festival is an organised event during which a variety of beers (and often other alcoholic drinks) are available for tasting and purchase. Beer festivals are held in a number of countries. A Beer Exhibition is usually synonymous with a Beer Festival but, whilst a beer festival may involve a limited range of beer styles or manufacturers, with an emphasis on entertainment, use of the term "beer exhibition" places emphasis on sampling or tasting a wide range of beers, usually craft-brewed in a variety of different styles by various brewers. There may be a theme; for instance beers from a particular area, or a particular brewing style such as winter ales. Beerex is a commonly used portmanteau word coined in 1977 as an abbreviated form of Beer Exhibition.[1] 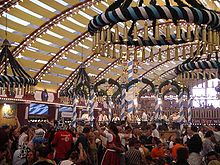 Inside a tent at Munich's Oktoberfest - the world's largest beer festival

The second largest genuine Bavarian festival is the Gäubodenvolksfest in Straubing. The festival is similar like Oktoberfest but it has an own history and it is not a copy of the Oktoberfest, as is the Barthelmarkt by Manching, which even dates back to Roman times. The third largest beer festival in Bavaria is the Bergkirchweih in Erlangen, with the largest open-air beer garden in Europe.

Not called "Oktoberfest", but very similar in character, is the Cannstatter Wasen in Stuttgart which starts one week later and is the second largest fair in the world. Smaller beer festivals similar to the Oktoberfest are common in Germany and take place throughout the year in most bigger German cities. Some of them go on later into the night than the Oktoberfest.

Other beer festivals include the Hanover Schützenfest, the Freimarkt in Bremen, and the Hamburger Dom. Like the Oktoberfest and the Cannstatter Wasen, most German beer festivals are also funfairs. They are called "Volksfest" (festival for the people).

Festivals are organised by the Campaign for Real Ale (CAMRA) and by pubs. CAMRA festivals are run by volunteers under the direction of local branches and the admission fee is reduced or waived for CAMRA members. Pub festivals use professional bar staff and there is usually no entry fee.

At British beer festivals casks of ale from different brewers are placed on stillage behind rows of trestle tables. Staff serve beer directly from the cask and take payment in the form of cash or tokens purchased at the entrance. Cooling is achieved using wet sacking or blankets for evaporative cooling or though refrigerated cooling saddles and coils. Glasses are distributed at the entrance to the venue, usually for a small deposit although often included in the entrance fee, often bearing a design specific to the festival. A beer list is usually available, often indicating where in the venue the different casks will be situated. Food is usually available, and entertainments and games such as live music, pub quizzes or tombolas are often organised.

In all British festivals the beer is sold in quantities of half or full pints. From 2006 the GBBF additionally served beer in "nips" (one-third of a pint), for the benefit of those who wish to sample many beers wthout consuming excessive amounts of alcohol.

Beer festivals are held across the United Kingdom. Notable ones include:

In addition, many small festivals are organised by local CAMRA branches, pubs, clubs and charities.

Belgium has a number of beer festivals,[2] including:

Beer festivals in Canada include the Great Canadian Beer Festival, which since 1993 (with help from the Victoria chapter of the Campaign for Real Ale (CAMRA)) has focused on cask ales from the Pacific Northwest. Since 2005 the festival has been held at Royal Athletic Park on the first weekend after Labour Day. The festival attracts over 40 craft breweries from across Canada and the Pacific North-western USA and more than 7000 visitors.[12][12] The Kitchener-Waterloo Oktoberfest is a nine-day event in Kitchener-Waterloo, which started in 1969 influenced by the original German Oktoberfest.[13] It is held every October, starting on the Friday before Canadian Thanksgiving and running until the Saturday after. Toronto's Festival of Beer was first held in 1995 at Fort York in Toronto, though has been held at Exhibition Place since 2009.[14] There is also the Lauder Beer Festival which is a much smaller and more exclusive festival held in the North end of Toronto. In 2010, the Ontario Craft Brewers started Ontario Craft Beer Week, a week-long craft beer celebration across the province.[15] The Mondial de la Bière was founded in 1994 in Montreal and attracts around 80,000 people.[16]

The Golden Tap Awards is an annual beer awards event held in Toronto. The awards are sponsored and presented by The Bar Towel, a website and forum dedicated to the discussion and promotion of Toronto's craft and microbrew beer scene.[17]

Festivals in other countries

The New Zealand Beer Festival has been run in Auckland and Wellington since 2007.[25][26] BrewNZ - Beervana is organized and run by the Brewers Guild of New Zealand.[27]