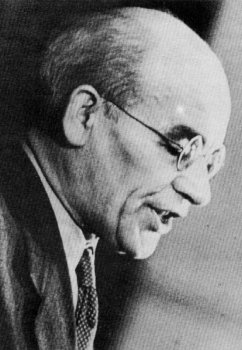 Władysław Gomułka (, , - , ) was a Polish Communist leader. He was a member of the ("Komunistyczna Partia Polski", KPP) starting in 1926.

In 1934 Gomułka went to , where he lived for a year. Upon his return to Poland he was arrested and spent most of his time in prison until the beginning of . During the war, Gomułka became an influential and in 1943 convinced Stalin to restore the ("Polska Partia Robotnicza"). He was a Deputy Prime Minister in the - "Rząd Tymczasowy Rzeczypospolitej Polskiej", from January to June 1945, and in the ("Tymczasowy Rząd Jedności Narodowej"), from 1945 to 1947. Using his position in the government, he assisted the Communists in winning the 3 x Tak (3 x Yes) of 1946 and winning the and became, as he said, "the of Poland". However, between 1951–1954, skirmishes between various Party factions led to Gomułka's imprisonment, denounced as "right-wing" and "reactionary", and expelled from the .

After the death of Stalinist Prime Minister in 1956, a brief period of began, raising popular hope for reform. In June 1956, an insurrection began in . The workers rioted to protest shortages of food and consumer goods, bad housing, decline in real income, shipments of commodities to the Soviet Union and poor management of the economy. The Polish government initially responded by branding the rioters "provocateurs, counterrevolutionaries and imperialist agents". Security forces killed and wounded scores of protesters. Soon, however, the party hierarchy recognized the riots had awakened nationalist sentiment and reversed their opinion. The rioters became "honest workers with legitimate grievances". Wages were raised by 50% and economic and political change was promised. [Rothschild and Wingfield: "Return to Diversity, A Political History of East Central Europe Since World War II" OUP 2000]

Edward Ochab, the Polish Prime Minister, invited the now-rehabilitated Gomułka to serve as First Secretary of the Party. Gomułka insisted that he be given real power to implement reforms. One specific condition he set was that the Soviet Marshal , who had ordered troops against the Poznan workers, be removed from the Polish Politburo and Defense Ministry, to which Ochab agreed. On , the majority of the Polish leadership, backed by the army and also the Internal Security Corps, brought Gomułka and several associates into the Politburo and designated Gomułka as First Secretary of the Party. The Soviet leadership viewed events in Poland with alarm. Simultaneously with troop 'manoeuvres' on the Soviet-Polish border, a high-level delegation of the Soviet flew to Poland. It was led by and included Mikoyan, Bulganin, Molotov, Kaganovich, Marshal Konev and others. Gomułka made it clear that Polish troops would resist if Soviet troops advanced, but reassured the Soviets that the reforms were internal matters and that Poland had no intention of abandoning communism or its treaties with the Soviet Union. The Soviets yielded. [cite web | title = Notes from the Minutes of the CPSU CC Presidium Meeting with Satellite Leaders, October 24, 1956 | work = The 1956 Hungarian Revolution, A History in Documents | publisher = George Washington University: The National Security Archive | date = November 4, 2002 | url = http://www.gwu.edu/~nsarchiv/NSAEBB/NSAEBB76/doc5.pdf | format = PDF | accessdate = 2006-09-02] Gomułka was confirmed in his new position. Information about events in Poland reached the people of via 's news and commentary services during 19 - 22 October 1956. A student demonstration in in support of Gomułka, asking for similar reforms in Hungary, soon sparked the .

Initially very popular for his reforms and seeking a "Polish way to socialism",

In December 1970, a bloody clash with workers in which several dozen workers were shot to death forced his resignation (officially for health reasons; he had in fact suffered a stroke). A dynamic younger man, , took over the Party leadership and tensions eased. Gomułka was forced to retire. After his death in 1982 of , his negative image in Communist propaganda was modified and some of his constructive contributions were recognized. His memoirs were first published in 1994.