Ephedra
This article is about the use of species of Ephedra in medicine. For botanical information, see Ephedra (genus).
For the prescription medication ephedrine, see ephedrine. 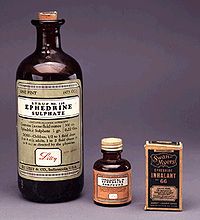 Bottle of Ephedrine, an alkaloid found in Ephedra

Ephedra refers to the plant Ephedra sinica.[1] E. sinica, known in Chinese as ma huang (麻黃; pinyin: má huáng), has been used in traditional Chinese medicine for 5,000 years for the treatment of asthma and hay fever, as well as for the common cold.[2] Several additional species belonging to the genus Ephedra have traditionally been used for a variety of medicinal purposes, and are a possible candidate for the Soma plant of Indo-Iranian religion.[3] Native Americans and Mormon pioneers drank a tea brewed from an Ephedra, called Mormon Tea.

Mormon Tea (Ephedra funerea) growing in the wild in the Fiery Furnace area of Arches National Park near Moab, Utah.

In recent years, the safety of ephedra-containing dietary supplements has been questioned by the United States Food and Drug Administration (FDA), the National Center for Complementary and Alternative Medicine, and the medical community as a result of a high rate of serious side effects and ephedra-related deaths.[4][5][6][7][8] In response to accumulating evidence of adverse effects and deaths related to ephedra, the FDA banned the sale of ephedra-containing supplements on April 12, 2004.[9] A suit by an ephedra manufacturer was upheld by a Federal District Court judge in Utah on April 14, 2005.[10] The FDA appealed this ruling, and on August 17, 2006 the U.S. Court of Appeals for the Tenth Circuit upheld the FDA's ban of ephedra.[11] The sale of ephedra-containing dietary supplements remains illegal in the United States due to evidence of adverse ephedra-related effects.

The alkaloids ephedrine and pseudoephedrine are the active constituents of the plant. Pseudoephedrine is used in over-the-counter decongestants. Derivatives of ephedrine are used to treat low blood pressure, but alternatives with reduced cardiovascular risk have replaced it for treating asthma. Ephedrine is also considered a performance-enhancing drug and is prohibited in most competitive sports. Some species in the Ephedra genus have no alkaloid content and are therefore essentially inert; however, the most commonly used species, E. sinica, has a total alkaloid content of 1–3% by dry weight. Ephedrine constitutes 40–90% of the alkaloid content, with the remainder consisting of pseudoephedrine and the demethylated forms of each compound.[12]

Ephedra is both a stimulant and a thermogenic; its biological effects are due to its ephedrine and pseudoephedrine content.[2] These compounds stimulate the brain, increase heart rate, constrict blood vessels (increasing blood pressure), and expand bronchial tubes (making breathing easier). Their thermogenic properties cause an increase in metabolism, evidenced by an increase in body heat.

In traditional Chinese herbology, E. sinica is included in many herbal formulas used to treat cold and flu such as 麻黃湯 ma huang tang (ephedra decoction) or 麻杏石甘湯 ma xing shi gan tang (ephedra, apricot kernel, gypsum, and licorice decoction). Ephedra is used therapeutically as a diaphoretic to help expel exterior pathogens and regulate the proper functioning of the lungs.[13]

Ephedra is widely used by athletes,[14] despite a lack of evidence that it enhances athletic performance.[15][16] Ephedra may also be used as a precursor in the illicit manufacture of methamphetamine.[17]

Ephedra has also been used for weight loss, sometimes in combination with aspirin and caffeine. Some studies have shown that ephedra, when taken in a regulated and supervised environment, is effective for marginal short-term weight loss (0.9kg/month more than the placebo), although it is unclear whether such weight loss is maintained.[18] However, several reports have documented the large number of adverse events attributable to unregulated ephedra supplements.[19]

There are no formal requirements for standardization or quality control of dietary supplements in the United States, and the dosage of effective ingredients in supplements may vary widely from brand to brand or batch to batch.[21][22][23] Studies of ephedra supplements have found significant discrepancies between the labeled dose and the actual amount of ephedra in the product. Significant variation in ephedrine alkaloid levels, by as much as 10-fold, was seen even from lot to lot within the same brand.[24][25]

Safety and regulatory actions in the United States

Escalating concerns regarding the safety of ephedra supplements led the FDA to ban the sale of ephedra-containing supplements in the United States in 2004. This ban was challenged by supplement manufacturers and initially overturned, but ultimately upheld.

In 1997, in response to mounting concern over serious side effects of ephedra, the FDA proposed a ban on products containing 8 mg or more of ephedrine alkaloids and stricter labeling of low-dose ephedra supplements. The FDA also proposed that ephedra labels be required to disclose the health risks of ephedra, such as heart attack, stroke, or death.[26]

In response, the supplement industry created a public relations group, the Ephedra Education Council, to oppose the changes, and commissioned a scientific review by a private consulting firm, which reported that ephedra was safe.[27] The Ephedra Education Council also attempted to block publication of a study confirming wide discrepancies between the labeled potency of supplements and the actual amount of ephedra in the product.[21]

During this time, Metabolife, makers of the best-selling brand of ephedra supplement, had received over 14,000 complaints of adverse events associated with its product; these reports were not provided to the FDA.[27][28] Co-founder of Metabolife, Michael J. Ellis, has been sentenced to six months in Federal prison for his failure to report adverse effects from his company's products to the FDA.[29] Senators Orrin Hatch and Tom Harkin, authors of the Dietary Supplements Health and Education Act, questioned the scientific basis for the FDA's proposed labeling changes and suggested that the number of problems reported were insufficient to warrant regulatory action. At the time, Hatch's son was working for a firm hired to lobby Congress and the FDA on behalf of ephedra manufacturers.[30]

In addition to the activities of the Ephedra Education Council, Metabolife spent more than $4 million between 1998 and 2000 lobbying against state regulation of ephedra in Texas.[31] Business Week reported that efforts to regulate ephedra and other potentially harmful supplements had been "beaten down by deep-pocketed industry lobbying."[32]

Ultimately, in 2000, the FDA withdrew the proposed labeling changes and restrictions.[33]

A review of ephedra-related adverse reactions, published in the New England Journal of Medicine in 2000, found a number of cases of sudden cardiac death or severe disability resulting from ephedra use, many of which occurred in young adults using ephedra in the labeled dosages.[4] Subsequently, in response to pressure from the consumer advocacy group Public Citizen,[32] Metabolife was compelled by the Department of Justice in 2002 to turn over reports of over 15,000 ephedra-related adverse events, ranging from insomnia to death, which the company had previously withheld from the FDA.[34][27] Use of ephedra was considered to have possibly contributed to the death of Minnesota Vikings offensive lineman Korey Stringer from heatstroke in 2001.[35]

Steve Bechler, a pitcher for the Baltimore Orioles, died of complications from heatstroke following a spring training workout on February 17, 2003. The medical examiner found that ephedra toxicity played a "significant role" in Bechler's sudden death.[36] Following Bechler's death, the FDA re-opened its efforts to regulate ephedra use. According to Bruce Silverglade, legal director for the Center for Science in the Public Interest, "All of a sudden [after Bechler's death] Congress dropped objections to an ephedra ban and started demanding the FDA act."[27]

Senator Orrin Hatch, who in 1999 had helped block the FDA's attempts to regulate ephedra, said in March 2003 that "...it has been obvious to even the most casual observer that problems exist," and called FDA action to regulate ephedra "long overdue."[30] Given Hatch's prior defense of ephedra, Time described his statement as "a dazzling display of hypocrisy."[37]

In response to renewed calls for the regulation of ephedra, the FDA commissioned a large meta-analysis of ephedra's safety and efficacy by the RAND Corporation. This study found that while ephedra promoted modest short-term weight loss, there was no evidence that it was effective for long-term weight loss or performance enhancement. The use of ephedra in this study was associated with significant gastrointestinal, psychiatric, and autonomic side effects.[38] Almost simultaneously, a study in Annals of Internal Medicine found that ephedra was 100 to 700 times more likely to cause a significant adverse reaction than other commonly used supplements such as kava or Ginkgo biloba.[5]

On December 30, 2003, the FDA issued a press release recommending that consumers stop buying and using ephedra, and indicating its intention to ban the sale of ephedra-containing supplements.[39] Subsequently, on April 12, 2004, the FDA issued a final rule banning the sale of ephedra-containing dietary supplements. Tommy Thompson, the Secretary of Health and Human Services, stated that "...These products pose unacceptable health risks, and any consumers who are still using them should stop immediately."[9]

Nutraceutical Corporation, a supplement manufacturer based in Park City, Utah, challenged the legality of the FDA's ban of ephedra as exceeding the authority given the agency by the Dietary Health Supplements and Education Act. Nutraceutical Corporation stated that they did not intend to start marketing ephedra, but were concerned about the scope of the FDA's regulatory action. Judge Tena Campbell of the Utah Federal District Court ruled that the FDA had not proven that low doses of ephedra were unsafe, although she also noted that studies to address the safety of low-dose ephedra would be unethical. Nevertheless, her ruling overturned the ban on the sale of ephedra in the state of Utah, and called into question whether the ban could be enforced anywhere in the United States.[40]

The ruling was appealed to the U.S. Court of Appeals for the Tenth Circuit in Denver, Colorado. On August 17, 2006, the Appeals Court upheld the FDA's ban of ephedra, finding that the 133,000 page administrative record compiled by the FDA supported the agency's finding that ephedra posed an unreasonable risk to consumers.[11] Nutraceutical Corp. filed a petition for a writ of certiorari seeking a rehearing on the ban of ephedra; however, on May 14, 2007 the United States Supreme Court declined to hear this petition. The sale of ephedra-containing dietary supplements remains illegal in the United States.[7]

Ephedrine is listed as a banned substance by both the International Olympic Committee and the World Anti-Doping Agency.[41] The U.S. National Football League banned players from using ephedra as a dietary supplement in 2001 after the death of Minnesota Vikings offensive tackle Korey Stringer; ephedra was found in Stringer's locker and lawyers for the team contend that it contributed to his death.[35][42] The substance is also banned by the National Basketball Association.[40] Nonetheless, ephedra remains widely used by athletes; a 2006 survey of collegiate hockey players found that nearly half had used ephedra in the belief it would enhance athletic performance.[14]

Prominent cases of ephedra use