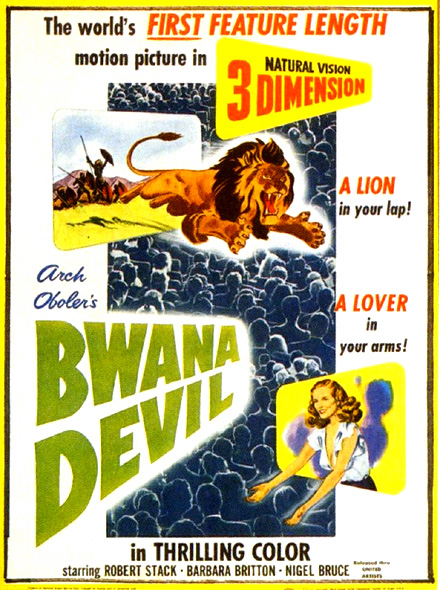 "Bwana Devil" is a drama based on the true story of the . It was written, directed, and produced by , and is considered the first color, American 3-D feature. It started the 3-D boom in the US film making industry from 1952 to 1954. It stars , and .

The film's tagline was: "The Miracle of the Age!!! A LION in your lap! A LOVER in your arms!"

The film is set in British East Africa in the early 20th century. Thousands of workers are building the , Africa's first railroad, and intense heat and sickness make it a formidable task. Two men in charge of the mission are Jack Hayward and Dr. Angus Ross. A pair of man-eating s are on the loose and completely disrupt the undertaking. Hayward desperately attempts to overcome the situation but the slaughter continues.

Britain sends three big-game hunters to kill the lions. With them comes Jack's wife. After the game hunters are killed by the lions, Jack sets out once and for all to kill them. A grim battle between Jack and the lions endangers both Jack and his wife. Jack kills the lions and proves he is not a weakling.

It was 1951 and theatre attendance had down-spiralled from 90 million in 1948 to 46 million a few years later. TV was the culprit and Hollywood was looking for a way to lure audiences back. had premiered September 30, 1952 at the Broadway Theatre in New York and was packing them in but its bulky and expensive three camera system was impractical if not impossible to duplicate in all but the largest theatres.

One time screen writer Milton Gunzburg and brother Julian thought they had a solution with their Natural Vision 3-D film process. They shopped it around Hollywood with little or no interest. was focusing on the introduction of , and had no interest in another new process. Both Columbia and Paramount passed it up. Only John Arnold, who headed the camera department, was impressed enough to convince MGM to take an option on it but they quickly let the option lapse.

Natural Vision appeared to be dead and the Gunzburgs were back to square one until a meeting with changed the history of films.

Milton Gunzburg turned his focus to independent producers and demonstrated Natural Vision to , producer and writer of radio's popular Lights Out show, who was impressed enough to option it for his next film project, "The Lions of Gulu". Oboler and co-producer scrapped 10 days of footage and started over using the Natural Vision process.

The film was based on a well-known historical event, that of the , in which many workers building the Uganda Railway were killed. The incident was also the basis for "", an adventure yarn written and published in 1907 by Lt. Col. J.H. Patterson, the Great White Hunter who dispatched the animals.

The Paramount Ranch, now located in The , sat in for an African . There is a now a hiking trail in the area named "The Bwana Trail" to denote the locations used in "Bwana Devil".

Authentic Africa footage previously lensed by Arch Oboler in 1948 (in 2-D) was incorporated into the film. Ansco color film was used instead of the more expensive and cumbersome Technicolor process.

The film premiered under the banner of "Arch Oboler Productions" On November 26, 1952 at the Paramount Theatres in Hollywood and Los Angeles. The film was a critical failure but a runaway success with audiences. Premieres followed in San Francisco on December 13, Philadelphia, Dallas, Houston and San Antonio openings on December 25 and New York on February 18, 1953.

bought the rights to "Bwana Devil" from "Arch Oboler Productions" for $500,000 and a share of the profits and began a wide release of the film in March as a "United Artists" film. A lawsuit followed, in which producer claimed that he was part owner in the film after purchasing a part of it for $1 Million USD. The courts decided in Oboler's favor, as Alperson's claim was unsubstantiated and "under the table."

The other major studios reacted by releasing their own 3-D films. optioned the Natural Vision process for "House of Wax". It premiered on April 10, 1953 and was advertised as "the first 3-D release by a major studio". In truth, Columbia had trumped them by two days with their release of "" on April 8, 1953.

* [http://movies2.nytimes.com/mem/movies/review.html?title1=Bwana%20Devil&title2=&reviewer=BOSLEY%20CROWTHER&pdate=19530219&v_id=86338 Bosley Crowther of the New York Times] said it was "a clumsy try at an African adventure film, photographed in very poor color in what appear to be the California hills".
* [http://www.variety.com/review/VE1117789626.html?categoryid=31&cs=1&p=0 Variety] summed up the process: "This novelty feature boasts of being the first full-length film in Natural Vision 3-D. Although adding backsides to usually flat actors and depth to landscapes, the 3-D technique still needs further technical advances."
*Time magazine called it a "dog".
* of The Saturday Review wrote, “It is the worst movie in my rather faltering memory, and my hangover from it was so painful that I immediately went to see a two-dimensional movie for relief. The polarization process darkened the image so that everything seems to be happening in late afternoon on a cloudy day. Nigel Bruce will either loom up before you or look like a puppet.

* [http://www.3dfilmfest.com/Bwana_Devil.html Bwana Devil played at the Second World 3-D Film Expo] on September 13th, 2006 in two strip polarized 3-D at the [http://www.americancinematheque.com/egyptian/egypt.htm Egyptian Theater] in Hollywood, Ca.
*The film has not been released on VHS or DVD.
*The film occasionally shows on the [http://www.amctv.com/show/detail?CID=482-1-EST AMC] cablevison channel.