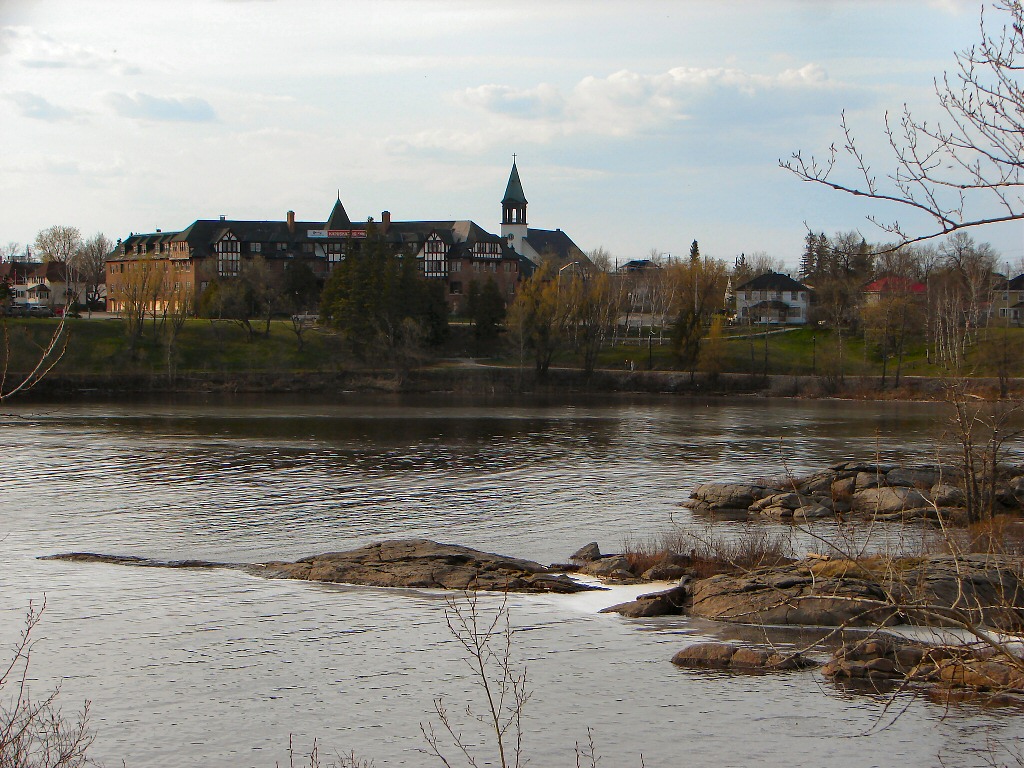 Kapuskasing (population 8,509 in the ) is a on the in the Cochrane District of northern , , approximately 92 km (57 miles) east of Hearst. The town was known as MacPherson until 1917 when the name was changed so as not to conflict with another railway stop in .

The town's pulp and paper mill is served by the Ontario Northland Railway, which took over the trackage serving the mill in 1994. The mill is located just off the original National Transcontinental Railway mainline (NTR) that was later nationalized as part of the Canadian National Railway. The railway line crossed the Kapuskasing River in 1913 and was the main means of transportation accessing the town until the late 1950s and early 1960s when Highway 11 became the main route to the City. Travellers today can reach Kapuskasing by car, by Ontario Northland bus or by plane. Kapuskasing's airport was once a refueling stop for Trans Canada Airlines flights in the days before jet airliners.

The Department of Crown Lands Report of the Survey and Exploration of Northern Ontario, 1900 contains references to the local Cree names for Sturgeon Falls, White Spruce Rapids, Kapuskasing River and Big Beaver Falls among others. Surveyors who explored the Kapuskasing River and tributaries in 1900 had local Cree guides familiar with the country who provided the local place names to them.

At the location where the CNR crossed the Kapuskasing River in 1913 there was an island in the centre of the river. Power and storage dams were built at that location in 1923. Prior to the dam construction the rapids at that location was know as "White Spruce Rapids" and later known simply as "Spruce Falls". The first Spruce Falls Company of 1920 got its name from these rapids.

Kapuskasing lies in the heart of the Great Clay Belt. The topography of the region is very flat, dotted with numerous small lakes and bogs. Also in the heart of Canada's the region is drained by rivers running north to . The district is heavily forested, mostly by thick stands of that have commercial value as pulpwood.

The area has long, very cold winters. The summer growing season is short and often punctuated by killing frosts. Visitors often comment on the deep blue of the sky during clear weather.

Wildlife is abundant. Species such as , black bear, and are commonly seen in the area. Lakes and rivers are well populated with , northern pike and yellow . Fishing and hunting are very popular recreational activities locally.

Located near the western edge of the of "New Ontario," the town was founded in the early 20th century after the , forerunner of the was built through the area in 1913.

The Kapuskasing River Pulp and Timber limit, that included km2 to mi2|4500|precision=-1 of timber and hydro leases at Sturgeon Falls, White Spruce Rapids (Spruce Falls) and Big Beaver Falls was awarded to speculators S.A. Mundy and Elihu Stewart in 1917 and Spruce Falls Pulp and Paper Ltd. was incorporated, but no development took place.

The still unexploited timber limits were sold to in 1920 and the new The Spruce Falls Company Limited began the development of the first pulp mill at Kapuskasing under the direction of F.J. Sensenbrenner, a Vice President of Kimberly Clark Corporation for the next 20 years. The small sulphite mill started up in late 1922 with four 12-ton digesters and an output capacity of 75 tons of pulp daily. Spent liquor was discharged untreated into the Kapuskasing River.

Early development was plagued by major setbacks. Fire destroyed the construction camp and power project at Sturgeon Falls. A years supply of pulpwood that was boomed up in the river was washed away in the spring flood. A fire at the new mill killed two workers and brought production to a halt.

In 1923 a water storage and hydro electric dam was built by Morrow and Beatty Ltd. of Peterborough at Spruce Falls. In 1925 the Spruce Falls Company Limited was awarded additional timber limits to the north and south bringing their total limits up to km2 to mi2|11830|precision=-1.

In 1926 The Spruce Falls Power and Paper Company was incorporated under joint ownership of Kimberly-Clark and . The new company negotiated two additional hydro power leases to the north on the at Smokey Falls and Devils Rapids. Work to build a 550 ton/day paper mill at Kapuskasing, a 75,000 HP hydro generating station at Smokey Falls and a km to mi|80|precision=-1 railway and power line connecting the two got underway in the spring of 1926. The contractor for the entire project was Morrow and Beatty Ltd. of Peterborough Ontario.

Since , the New York Times has been printed entirely on Spruce Falls paper. The mill has run continuously ever since. The company became known locally as "Uncle Spruce" in affectionate reference to the steady work and benefits provided to this distinct northern community for many decades.

The mill was the focus of the , which saw 3 union workers killed. In 1997 became the sole owner of the mill which is now know as Tembec - Spruce Falls Operations.

The Kapuskasing Inn, together with the Civic Centre (built 1928) and the former Sensenbrenner Hospital (built 1929, now Drury Place, a geared-to-income housing complex), was built in 1928 by Spruce Falls Company Ltd. These buildings were all built in an impressive Neo-Tudor style and would form the nucleus of the town. In 1951, the Inn hosted Princess Elizabeth and Prince Philip, on their first visit to Canada. [ [http://www.es.uwaterloo.ca/research/hrc/catherine_nasmith_architect/issue56.html#inn Heritage Resources Centre] ]

The landmark inn closed in 2002 and fell in disrepair but was slated for renovation by new investors. On May 22, 2007, youths set fire to the inn. It was damaged beyond repair. The arsonists were not charged as they were below the age of criminal responsibility at the time of the fire. [Timmins Daily News - May 25, 2007.] The remains of the Inn were demolished in May and June 2008.

During , the town was the site of an internment camp that held over 1,200 German, Austrian, Ukrainian, and Turkish prisoners. Prisoners were employed in the clearing of land for a government experimental farm on the west side on the river. Isolation provided ideal security for the minimum security camp as the railway was the only access to the remote location. Prisoners who attempted to escape into the bush were turned back by endless and clouds of mosquitoes or minus 40 degree temperatures in winter. A small cemetery is all that remains of the internment camp near the Kapuskasing Airport where victims of the 1918 influenza epidemic were laid to rest.

Governments of the day were mistakenly impressed with the agricultural potential of the Great Clay Belt. A federal government experimental farm had been established on the west side of the river to explore and develop crops and systems for farming the area. Under the Returned Soldiers and Sailors Act of 1917 the Kapuskasing Soldier Colony was established to settle veterans returned from the Great War. Settlers received homesteads, grants and guaranteed loans and were paid for clearing their own land. But by 1920 only nine of more than a hundred original settlers remained.

A 1920 Commission of Enquiry into the failed settlement scheme found that the settlers had not been up to the task at hand. The inhospitable climate and geography had won out. One bitter settler testified "There are 7 months snow, two months rain and the remainder mosquitoes and black flies". Settlers had also counted on the development of a pulp mill at Kapuskasing that would provide a local market for pulp wood.

The former Spruce Falls, now , pulp and paper mill is the town's major employer. Another employer is the Agrium phosphate mine.

operates the GM Cold Weather Development Centre at Kapuskasing. operates an , or Experimental Farm, close to the town.

Kapuskasing has a federal representative known as a Member of Parliament, or MP, and a provincial representative known as a Member of Provincial Parliament, or MPP. Brent St. Denis, of the Liberal Party of Canada, is the area's MP and represents the federal riding of . [ [http://www.brentstdenis.parl.gc.ca/home.asp?lang=e Brent St. Denis, M.P ] ] , member of Ontario's New Democratic Party, is the town's MPP and represents the provincial Timmins—James Bay riding. [ [http://www.gillesbisson.com/ Gilles Bisson - MPP/Député Provincial :: Timmins-James Bay-Baie James ] ]

Locally the town is led by Mayor . The mayor works with six councillors to complete Kapuskasing's municipal government. Local officials are all elected through universal elections, meaning the town is not divided into wards. [ [http://www.town.kapuskasing.on.ca/council.html] ]

Sensenbrenner Hospital was built in 1929 by the Spruce Falls Pulp & Paper Company for its workers. At the time the hospital was one of northern Ontario's finest. In 1988 the need for a more modern facility arose and the ultra-modern 53 bed complex was built in a different part of the town. Sensenbrenner serves a regional population of 14,000 residents. The hospital provides both in-patient and out-patient care. Clinical services include; emergency services, chronic cardiorespiratory, acute neurology, specialty clinics, general medicine, surgery, anaesthesia, obstetrics, pediatrics, chronic and long-term care, rehabilitation, and other related diagnostic and treatment services. The health care services are assessment, evaluation, screening, treatment programs and direct therapy. In 1995 the hospital built a private clinic wing near the Emergency Room.

EMS services are provided by Sensenbrenner Hospital, which is managed by the Northeastern Ontario Medical Education Corporation (NOMEC).

The town operates a fire department which is a member of the Fire Marshalls of Ontario, Public Fire Safety Council.

A local branch of the Ontario Provincial Police is located 1 km east of the town on Highway 11.

Kapuskasing has (E911) service for Fire, Ambulance and Police.

Children's Aid Services, Counselling services, Detox centres, Chiropractitioners, and many other services are offered for those who need it.