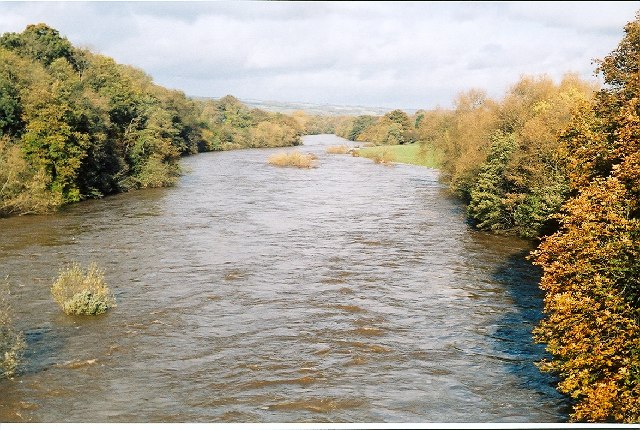 :"This article is about the river that flows along or close to the Anglo-Welsh border." :"See for other rivers called Wye."

The River Wye (Welsh: "Afon Gwy") is the fifth-longest river in the UK and for parts of its length forms part of the border between and . It is important for nature conservation and recreation.

The source of the Wye is in the Welsh s at . It flows through or past several towns and villages including , , , , , , and , meeting the just below .

The Wye itself is a and one of the most important rivers in the UK for nature conservation. Much of the lower valley is an . The Wye is largely unpolluted and is therefore considered one of the best rivers for fishing in the , outside of .

It is also a popular river with ists due to the relatively slow flowing water, making it good for beginners. The are more challenging. Walkers can enjoy the which follows the route of the River Wye from Hay-on-Wye to Chepstow along a series of well maintained way-marked paths.

The lower convert|16|mi|km|0 of the river from to Chepstow form the border between England and Wales. A viewpoint near The Biblins on the Wye is known as 'Three counties view', the meeting place of the counties of , and .

The Romans constructed a bridge of wood and stone just upstream of present day Chepstow. The River Wye was and still is navigable up to at least since the early 14th century. It was improved from there to a short distance below Hereford by Sir William Sandys in the early 1660s with locks to enable vessels to pass weirs. According to Herefordshire Council Archaeology, these were flash locks. [cite web| url=http://www.smr.herefordshire.gov.uk/agriculture%20_industry/navigation_wye_twnfc.htm| title=The Non-tidal Wye and its Navigation (from "Transactions of the Woolhope Naturalists Field Club," 1958 pg 86-94)| author=I. Cohen| accessdate=2006-12-09] The work proved to be insufficiently substantial and in 1696 a further Act of Parliament authorised the County of Hereford to buy up and demolish the mills on the Wye and Lugg. All locks and weirs were removed, except that at New Weir Forge below Goodrich, which survived until about 1815. This was paid for by a tax on the County. Weirs were removed all along the Wye in , making the river passable to the western boundary, and beyond it at least to . A horse towing path was added in 1808, but only up to Hereford; previously, as on the , barges were man-hauled. Money was spent several times improving the from to its confluence with the Wye at , but its navigation is likely to have been difficult. The Wye remained commercially navigable until the 1850s, when commercial traffic moved to s. It is still used by pleasure craft.

The River Wye is ideal for and as it has sections suitable for all ranges of skills and free access all the way downstream from through to and the [http://www.waterscape.com/canals-and-rivers/river-wye/boating River Wys boating (accessed 2008-04-270] .

There are a wide range of canoe hire and supervised trips, as well as campsites at key points on the river. has a particularly popular series of that was purchased by the in 2003 to preserve the rapids for recreational use [ [http://news.bbc.co.uk/1/hi/wales/2853463.stm BBC NEWS | Wales | River rapids sold to canoeists ] ] .

The navigation on the tidal part of the Wye, below , is under the control of the as Competent Harbour Authority.

An annual is held at for rowers and scullers of all abilities, next to the local rowing club.

:"How oft, in spirit, have I turned to thee,":"O sylvan Wye! thou wanderer thro' the woods,":"How often has my spirit turned to thee!"