Brough, sometimes known as Brough under Stainmore, is a village and civil parish in the Eden district of Cumbria, England, on the western fringe of the Pennines near Stainmore. The village is on the A66 trans-Pennine road, and the Swindale Beck, and is about 8 miles (13 km) south east of Appleby-in-Westmorland. Brough is situated 5 miles (8.0 km) north east of Kirkby Stephen and 28 miles (45 km) north east of Kendal on the A685. 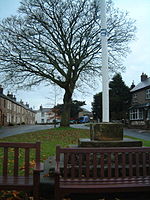 Brough lies within the historic boundaries of the ancient county of Westmorland. At the 2001 census it had a population of 680.

The village is on the site of the Roman fort of Verterae, or Verteris, on the Roman road linking Carlisle with Ermine Street. The area of the rectangular fort, which once occupied the land to the south of the Swindale Beck, is now a Scheduled Ancient Monument [1]. Brough Castle was originally built in the 11th century within the northern part of the former fort.

Brough has historically been divided into Market Brough, to the north, and Church Brough, to the south and centred on the castle and St Michael's Church. In 1977 this division was made physical by the construction of the Brough bypass dual carriageway, taking the A66 away from the village main street.

St Michael's Church also dates back to the Norman period, and may have suffered during William I of Scotland's attack on the castle in 1174. The church was enlarged in the 14th century, and again in the early 16th, when most of the existing structure was built. The tower was constructed by Thomas Blenkinsop of Helbeck in 1513. Repairs and improvements continue to this day. Further information can be found at [2]

Nearby is Augill Castle, built in 1841 by John Bagot Pearson from Kirkby Lonsdale as a weekend retreat and now a hotel.

Traditionally, on Twelfth Night, a burning holly tree (subsequently, ash trees were used) would be carried through the village, followed by a brass band. When the flames had partially gone out, the villagers would try to bring the tree to a pub, where the party would continue until the early hours of the morning. [1][2] The village was also the venue for a popular fair on the second Thursday of March. [3]