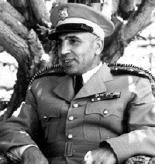 Born to ish parents in the western town of , , Shishakli served with the during the mandate era. He studied at the Military Academy of (which later was relocated to Homs) and became an early member of the (SSNP) of , promoting the concept of a . His brother Salah was also a prominent member of the SSNP. After , Shishakli fought in a volunteer army, known as the , against the Zionist militias in the .

The Arab in that war was a motivating factor for the military of which had taken place soon after in 1949, shattering Syria's weak parliamentary system. Only months after al-Za'im's takeover, the weak ruler was overthrown by a group of officers connected to the SSNP, including Shishakli and , who led the new military junta. Za'im had betrayed the SSNP leader , giving him to Lebanese authorities where he was tried and executed for wanting to destroy the modern state of Lebanon. An infuriated Shishakli co-launched the coup of 1949 to revenge 's killing, and reportedly ripped off Za'im's bloodstained shirt and took it to Saadeh's widow, who was still in Syria, telling her: "We have avenged his murder!"

Shishakli worked with Sami al-Hinnawi, the new de facto ruler of Syria who refused to assume power on his own and restored Syria's parliamentary system. Hinnawi became chief-of-staff of the Syrian Army and the veteran nationalist , who had been president in the 1930s, to become prime minister, and then president of Syria. Atassi wanted to create union with , something which Shishakli greatly opposed, claiming that Hinnawi was the drive behind pro-Hashemite sentiment in Syria.

In December 1949, Shishakli launched another coup, the third in 1949, arresting Hinnawi to break Hashemite influence in Syria, but keeping Atassi at his post. He then ordered the assassination of Mohammad Nasser, the Air Force Commander, because he threatened Shishakli's popularity in the Syrian Army. All of this greatly weakened the pro-union elements in Syria but they continued to try working for union through the cabinets of Prime Minister . Shishakli conditioned that all governments must include his right-hand-man as minister of defense, to curb Hashemite influence in the Syrian government. When Prime Minister , a pro-Iraq politician from Aleppo, refused, Shishakli responded on November 28, 1951. He arrested Dawalibi and his entire cabinet, in addition to all pro-Iraq politicians in Syria, including the leaders of the People's Party, Nazim al-Kudsi and . In protest, Atassi resigned from office and moved into the opposition. Pleased to get rid of this stubborn nationalist, who rejected officer intervention in political affairs, Shishakli made his comrade Selu the Chief-of-Staff of the Army, the Prime Minister, the Minister of Defense, and the Head of State. But in effect, Selu was nothing but a figurehead. Real powers lay in the hands of Adib al-Shishakli.

Shishakli then dissolved all political parties and banned many newspapers, in a return to military rule. Among those to suffer persecution under his rule were the National Party of Damascus, the People's Party of Aleppo, the Communist Party, the , and the Syrian . He also outlawed all s that were not pro-Shishakli, and banished the Baath leaders , , and to Lebanon, where they then actively worked against his regime. He was a skilled public speaker, however, and relied greatly on the to transmit his speeches to every-day Syrians. In August 1952 he established an official government party, the Arab Liberation Movement, but it was ed by powerful representatives of the civilian political society, such as . The party was progressive, accepting women among its ranks and calling for a limited degree of socialism. Some said that he viewed himself as "an Arab Caesar." In mid-1953 Shishakli staged a to elect himself President, but he was by now facing mounting dissent.

As leader of Syria, Shishakli sought good relations with Western countries, and maintained Syria's uncompromising stance towards . Syrian relations with the monarchies of and were poor during his presidency, but he also looked with distrust at the rapid spread of . Many believe that Nasser's Free Officer Revolution of 1952 in had been modeled after Shishakli's own coups of 1949 and 1951. Shishakli's relations were strong, however, with King Abdul-Aziz of , his son King Saud, and King Talal of . Shishakli greatly liked King Talal, saying that he had no ambitions in Syria, unlike his father King Abdullah I or his son, King Hussein. Despite this, and in contrast with his pro-Western outlook and Kurdish background, Shishakli recognized the desires of Syria's majority, and accordingly adopted a policy of . He clashed frequently with the independent-minded minority on the mountain, accusing them of wanting to topple his regime using funds from Jordan, and in 1954 resorted to shelling Druze strongholds to put down resistance to his rule.

His relations with both Britain and the US ran hot and cold. Britain courted Shishakli during the early period of his rule in the hope that Syria would join plans for a British-led Middle East Defense Organization. The United States offered Shishakli considerable sums of money to settle Palestinian refugees in Syria and turn them into Syrians. Shishakli, although tempted by these offers of Western arms and money, did not take them. The Palestinian situation had soured Syrians on relations with the West. Syria wanted revenge rather than to accept defeat and repair Syria's damaged relations with the West and make peace with Israel. [http://faculty-staff.ou.edu/L/Joshua.M.Landis-1/US%20Policy%20toward%20Palestine%20Refugees%20new.doc]

Growing discontent eventually led to another coup, in which Shishakli was overthrown in February 1954. The plotters included members of the , disgruntled Druze officers, members, and possibly had Iraqi backing. He had also arrested a lot of active officers in the Syrian Army, including the rising young , also a prominent Baathist. Leading the anti-Shishakli movement were former President Atassi and the veteran Druze leader . The largest anti-Shishakli conference had been held in Atassi's home in . Shishakli had responded by arresting Atassi and 's sons, Adnan and Mansur (both of whom were ranking politicians in Syria).

When the reached its peak, Shishakli backed down, refusing to drag Syria into . He fled to Lebanon, but when the Druze leader threatened to have him killed, he fled to . Prior to the union between Syria and Egypt in 1958, Shishakli toyed with the idea of returning to Syria to launch a coup d'état, using funds - ironically - provided by Iraq. The coup was foiled by Syrian intelligence and Shishakli was sentenced to death "in absentia", although he never attended its hearings.

On , , Shishakli was assassinated in Brazil by , a Syrian Druze who sought revenge for the bombardments of Jabal Druze.

The assailant was considered a national hero by the Druze. When he died in 2005, thousands of people attended his funeral.

In the 1990s, he was depicted on screen for the first time in a TV series, played by the Syrian actor .