Dinis (Portuguese: Dinis or Diniz, IPA: [diˈniʃ]; Lisbon, 9 October 1261 – 7 January 1325 in Santarém), called the Farmer King (Rei Lavrador), was the sixth King of Portugal and the Algarve. The eldest son of Afonso III of Portugal by his second wife, Beatrice of Castile and grandson of king Alfonso X of Castile (known as the Wise), Dinis succeeded his father in 1279. 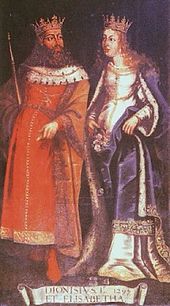 As heir to the throne, Infante (Prince) Dinis was summoned by his father (Afonso III) to share governmental responsibilities. At the time of his accession to the throne, Portugal was again in diplomatic conflict with the Catholic church. Dinis signed a favouring agreement with the pope and swore to protect the Church's interests in Portugal. He granted asylum to Templar knights persecuted in France and created the Order of Christ, designed to be a continuation of the Order of the Temple.

With the Reconquista completed and the Portuguese territory freed from Moorish occupation, Dinis was essentially an administrative king, not a military one. However, a short war between Castile and Portugal broke out during his reign, for the possession of the towns of Serpa and Moura. After this, Dinis avoided war: he was a notably peace-loving monarch during a tempestuous time in European history. With Portugal finally recognized as an independent country by his neighbours, Dinis signed a border pact with Ferdinand IV of Castile (1297) which has endured to the present day.

Dinis' main priority of government was the organization of the country. He pursued his father's policies on legislation and centralization of power. Dinis promulgated the nucleus of a Portuguese civil and criminal law code, protecting the lower classes from abuse and extortion. As king, he travelled around the country, correcting unjust situations and resolving problems. He ordered the construction of numerous castles, created new towns, and granted privileges due cities to several others. He declared in 1290 that ‘the language of the people’ was to become the language of the state, and officially known as Portuguese. Diniz also made Portuguese the language of the law courts in his kingdom. With his wife, Infanta Isabella of Aragon, Dinis worked to improve the life of the poor and founded several social institutions.

Always concerned with the country's infrastructure, Dinis ordered the exploration of mines of copper, silver, tin and iron and organized the export of excess production to other European countries. The first Portuguese commercial agreement was signed with England in 1308. Dinis effectively founded the Portuguese navy under command of a Genoese admiral, Micer Manuel Pessanha (Portuguese form of the Italian "Pezagno"] and ordered the construction of several docks.

His main concern was the redevelopment and promotion of rural infrastructure, hence the nickname of "the Farmer". Dinis redistributed the land, promoted agriculture, organized communities of farmers and took personal interest in the development of exports. He instituted regular markets in a number of towns and regulated their activities. One of his main achievements was the protection of agricultural lands from advancing coastal sands, by ordering the planting of a pine forest near Leiria. This forest still exists as one of the most important of Portugal and is known as the Pinhal de Leiria (Leiria Pinewood).

Culture was another interest of King Dinis. He had a fondness for literature and wrote several books himself, with topics ranging from administration to hunting, science and poetry. In his day, Lisbon was one of Europe's centers of culture and knowledge. The University of Lisbon (today's University of Coimbra) was founded by his decree Magna Charta Priveligiorum. He was also a troubadour. All told, 137 of his songs (more than any other poet), in the three principal genres of Galician-Portuguese lyric, are preserved in the two early 16th century manuscripts, the Cancioneiro da Biblioteca Nacional, the Cancioneiro da Vaticana. A spectacular find in 1990 by American scholar Harvey Sharrer brought to light the Pergaminho Sharrer, which contains, albeit in fragmentary form, seven cantigas d'amor by King Dinis with musical notation. The same poems are found in the same order in the two previously known codices. 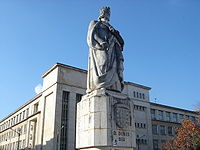 King Diniz statue at the University of Coimbra

The later part of his peaceful reign was nevertheless marked by internal conflicts. The contenders were his two sons: Afonso the legitimate heir, and Afonso Sanches his natural son, who quarrelled frequently among themselves for royal favour. At the time of Dinis' death in 1325 he had placed Portugal on an equal footing with the other Iberian Kingdoms.

Dinis is buried in the Monastery of Saint Denis of Odivelas, a Cistercian monastery founded by him in 1295.

Dinis' only wife was Isabel or Elizabeth of Aragon, daughter of Pedro or Peter III of Aragon. They married in 1288 and he bore him a son and a daughter.