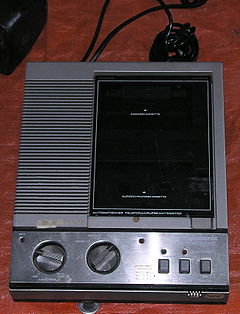 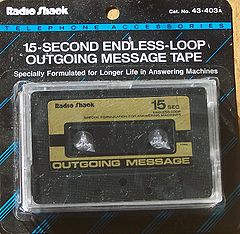 Unlike voicemail, which can be a centralized or networked system that performs a similar function, an answering machine must be installed in the customer's premises alongside — or incorporated within — the customer's telephone.

The answering machine was originally invented in 1898 by Valdemar Poulsen,[2] and was the first practical device used for recording telephone conversations. Poulsen's device, known as a telegraphone, laid the foundation for the invention of the answering machines used today.[3] The creation of the first practical automatic answering device for telephones is in dispute. Many claim it was William Muller in 1935, but most accept it was created in 1931 by William Schergens.[4]
The first commercial answering machine offered in the US was in 1949, the Tel-Magnet, which played the outgoing message and recorded the incoming message on a magnetic wire. It was priced at $200 but was not a commercial success.[5]
The first commercially successful answering machine was the Ansafone created by inventor Dr. Kazuo Hashimoto, who was employed by a company called Phonetel. This company began selling the first answering machines in the US in 1960.[6]

While early answering machines used magnetic tape technology, most modern equipment uses solid state memory storage; some devices use a combination of both, with a solid state circuit for the outgoing message and a cassette for the incoming messages. In 1983, Kazuo Hashimoto received a patent for a digital answering machine architecture with US Patent 4,616,110.[7] The first digital answering machine brought to the market was AT&T's 1337; an activity led by Trey Weaver. Mr. Hashimoto sued AT&T but quickly dropped the suit because the AT&T architecture was significantly different from his patent.[8]

On a two-cassette answerphone, there is an outgoing cassette, usually a special endless loop tape on earlier machines (before the rise of microcassettes), which after a certain number of rings plays a pre-recorded message to the caller who rang the number. Once the message is complete, the outgoing cassette stops and the incoming cassette starts recording the caller's message, and then stops once the line is cut.

Single-cassette answering machines contain the outgoing message at the beginning of the tape and incoming messages on the remaining space. They first play the announcement, then fast-forward to the next available space for recording, then record the caller's message. If there are many previous messages, fast-forwarding through them can cause a perceptible delay.

An answerphone may have a remote listening facility whereby the answerphone owner can ring their home number and, by either sending a tone down the line using a special device, or by entering a code on the remote telephone's keypad, can listen to messages when away from home.

Most modern answering machines have a system for greeting. The owner may record his or her message that will be played back to the caller, or an automatic message will be played if the owner does not record one. Answering machines can usually be programmed to take the call at a certain number of rings. This is useful if the owner is screening calls and does not wish to speak with all callers.

Many devices offer a "toll saver" function, whereby the machine answers only after several rings (typically four) if no messages have been left, but answers after a smaller number of rings (usually two) if there are messages. This allows the owner to know whether there are messages waiting; if there are none, he or she can hang up the phone on the third ring without incurring a call charge.

Some machines also allow themselves to be activated, if they have been switched off, by calling and allowing the phone to ring a certain large number of times (usually 10-15).

In call centres, answering machines may have integrated applications of artificial intelligence, such as speech recognition software to allow computers to handle first level of customer support, text mining and natural language processing to allow better customer handling, agent training by automatic mining of best practices from past interactions, support automation and many other technologies to improve agent productivity and customer satisfaction.[9] An example of such applications is Interactive Voice Response (IVR), which allows a computer to interact with humans through the use of voice and DTMF keypad inputs. IVR systems are typically used to service high call volumes, reduce cost and improve the customer experience. Examples of typical IVR applications are telephone banking, televoting, and credit card services. Companies also use IVR services to extend their business hours to 24/7 operation.