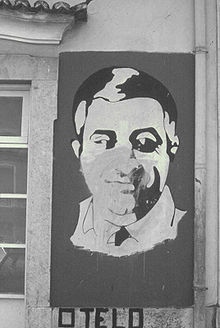 Otelo Saraiva de Carvalho was born in Lourenço Marques, Portuguese Mozambique, now Maputo, Mozambique, of some Goan (Portuguese India) ancestry. Named by his theater-minded parents after Shakespeare's Othello, he had his secondary education at a state school in Lourenço Marques. His father was a civil servant and his mother a railway clerk. He entered the Military Academy in Lisbon at the age of nineteen.

Carvalho spent many years in the colonial wars in Africa. He served in Portuguese Angola from 1961 to 1963 as a second lieutenant, and as a captain from 1965 to 1967. He was posted to Portuguese Guinea in 1970 as a captain, under General António de Spínola, in charge of civilian affairs and propaganda ('Hearts and Minds'). 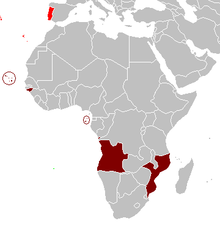 Portuguese overseas territories in Africa during the Estado Novo regime: Angola and Mozambique were by far the two largest of those territories.

He joined the underground Movement of Armed Forces (Movimento das Forças Armadas - MFA), which carried out a coup d'état in Lisbon on April 25, 1974, in which he played a directing role. The MFA started as a military professional class[1] protest of Portuguese Armed Forces captains against a decree law: the Dec. Lei nº 353/73 of 1973.[2][3] The rebellion were a way to work against Laws that would reduce military costs and would reformulate the whole Portuguese Military Branch. Younger military academy graduates, with Otelo Saraiva de Carvalho at their head, resented a program introduced by Marcello Caetano whereby militias who completed a brief training program and had served in the overseas territories' campaigns, could be commissioned at the same rank as academy graduates.[4] Carvalho was part of MFA-led National Salvation Junta that governed the country after the Carnation Revolution, as the upheaval came to be called.

In July 1974 Carvalho was made a Brigadier and placed in command of the special military Command for the Continent COPCON, which was set up to secure order in the country and to promote the revolutionary process. In 1975, infighting in the MFA intensified with Carvalho representing the left-wing of the movement. A right-wing putsch attempt, led by Spinola, was thwarted by the timely intervention of COPCON in March 1975. He became part of the Council of the Revolution which was created On March 14, 1975. In May 1975, he was temporarily promoted to General and, together with Costa Gomes and Vasco Gonçalves, formed the Directório (Directorate).

On November 25, 1975 the Portuguese Communist Party and its armed branch allegedly tried to seize control of the country. Otelo is said to have orchestrated this coup. Some of the military under Otelo's orders took control of three Air Force bases. The right-wing of the army used this as pretext to launch a counter-revolution, which brought António Ramalho Eanes to power. It is also implied that the coup did not work because Carvalho did not support the military. This is why the Communists still hate Carvalho. They believe that Portugal did not became a communist nation because of this.[5]

In 1976 and 1980 Carvalho unsuccessfully stood as a candidate for president against Eanes. In 1982 he was recalled to the army, since it was shown that his discharge had been politically motivated. In 1984 he was arrested and accused of contact with or membership of the terrorist group Popular Forces 25 April (FP-25 Abril) (Portuguese:Forças Populares 25 de Abril), which claimed a number of robberies and murders in Portugal in the following years. His trial was controversial and his allies assumed it to be motivated by revenge. In 1989, he was amnestied and a resumption of the procedure was struck down because of a legal imbroglio. Since then, he has been a small-businessmen trading arms and other military material with a number of African countries.

Carvalho once said: "We should have gathered some thousands fascists in Campo Pequeno, and eliminated them. That would end the counter-revolution."[5]

Carvalho is still an icon for activists of the left in Portugal, and is hated by many people who consider him a terrorist who tried to seize the country to become Portugal's Fidel Castro.[5]

In 2011 when the Portuguese Republic went bankrupt and requested international financial assistance, Otelo Saraiva de Carvalho, one of the chief captains who coordinated and organized the April 1974 military coup - the Carnation Revolution, stated that he wouldn't have made the revolution if he had known what the country would become after it.[6]