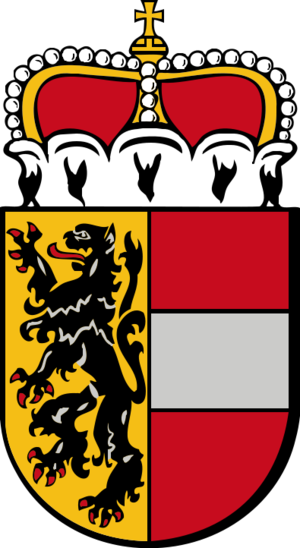 The Archbishopric of Salzburg was an ecclesiastical state of the , roughly consisting of the present-day state of Salzburg (the ancient Roman city of "Iuvavum") in .

The last Archbishop with princely authority was , an early patron of Salzburg native .

Since 1648, the Archbishop of Salzburg has also borne the title "" ("First [Bishop] of Germania"). The powers of this titlendash now non-jurisdictionalndash are limited to being the Pope's first correspondent in the German-speaking world, but used to include the right to summon the s. The Archbishop also has the title of "legatus natus" ("permanent legate") to the Pope, which, although not a cardinal, gives the Archbishop the privilege of wearing a cardinal's scarlet vesture, even in Rome.

Around AD 450, the "" reported that Salzburg was home to two churches and a monastery. Very little is known of the early bishopric, and St. Maxius is the only abbot-bishop known by name. A disciple of St. Severin, he was martyred in the retreat from . Salzburg was destroyed soon after in c. 482 and with it the bishopric, six years before the departure of the Roman legions from the region.

, Bishop of Worms and called the apostle of and Carinthia, later came to the region and reestablished the diocese after erecting a church at and finding the ruins of Salzburg overgrown with brambles. It is unknown whether he arrived in c. 543 during the time of Theodo I or in c. 698 when Bavaria was conquered by the . In either case, it was not until after 700 that Christian civilisation reemerged in the region. The cathedral monastery was named in honour of and Rupert's niece founded the nunnery at . completed the work of St. Rupert, and placed Salzburg under the primatial see of the . St. Boniface quarrelled with Bishop St. Vergilius over the existence of antipodes, although St. Vergilius began the valuable book , or the Confraternity Book of St. Peter.

Arno enjoyed the respect of the Frankish king who assigned to him the missionary territory between the Danube, the Raab, and Drave Rivers which had recently been conquered from the . Monasteries were founded and all of Carinthia was slowly Christianised. While Arno was in attending to some of Charlemagne's business in 798, appointed him Archbishop over the other bishops in (Freising, Passau, Regensburg, and Säben). When the dispute over the ecclesiastical border between Salzburg and Aquileia broke out, Charlemagne declared the Drave to be the border. Arno also began the copying of 150 volumes from the court of Charlemagne, beginning the oldest library in Austria.

Archbishop Adalwin suffered great troubles when King Rastislav of attempted to removed his realm from the ecclesiastical influence of the Germans. appointed Methodius the Archbishop of and , and it was only when Rastislav was captured by King Louis II that Adalwin could adequately protest the invasion of his rights. Methodius appeared at the where he was struck in the face and imprisoned in close confinement for two and a half years. Adalwin attempted to legitimise his imprisonment, but was compelled to release Methodius when ordered by the Pope.

Soon after, the Magyars ravaged Great Moravia and not a church was left standing in Pannonia. Archbishop Dietmar I fell in battle in 907. It was not until the in 955 that the Magyars suffered a crushing defeat, and ecclesiastical life in Salzburg returned to normal. The following year after Archbishop Herhold allied with Duke Ludolph of and Duke Conrad the Red of Lorraine, he was deposed, imprisoned, blinded, and banished. Archbishop Bruno of Cologne, called the Bishop-Maker, appointed Frederick I archbishop and declared the independent. In 996, Archbishop Hartwig received the right to mint money.

In the era beginning with , the Catholic church entered an era of santification and righteousness in the church. The first archbishop of the era was Gebhard, who during the remained on the side of the Pope. Gebhard thus suffered a nine year exile, and was allowed to return shortly before his death and was buried in . His successor Thimo was imprisoned for five years, and suffered a horrible death in 1102. After King Henry IV abdicated and Conrad I of Abensberg was elected Archbishop. Conrad lived in exile until the of 1122. Conrad spent the remaining years of his episcopate improving the religious life in the archdiocese.

The Archbishops again took the side of the Pope during the strife between them and the s. Archbishop Eberard I of Hilpolstein-Biburg was allowed to reign in peace, but his successor Conrad II of Austria earned the Emperor's wrath and died in 1168 in a fugitive. Conrad III of Wittelsbach was appointed the Archbishop of Salzburg in 1177 at the Diet of Venice, after the partisans of both Pope and Emperor were deposed.

Archbishop Eberhard II of Regensberg was made a in 1213, and created three new sees: Chiemsee (1216), Seckau (1218) and Lavant (1225). Eberhard was d in 1245 after refusing to publish a decree deposing the emperor and died suddenly the next year. During the , Salzburg also suffered confusion. Philip of Spanheim, heir to the Dukedom of Carinthia, refused to take priestly consecrations, and was replaced by Ulrich, Bishop of Seckau.

King Rudolph I of Habsburg quarrelled with the archbishops through the manipulations of Abbot , and after his death the archbishops and the Habsburgs made peace in 1297. The people and archbishops of Salzburgs remained loyal to the Habsburgs in their struggles against the Wittelsbachs. When the reached Salzburg in 1347, the Jews were accused of poisoning the wells and suffered severe persecution. The Jews were expelled from Salzburg in 1404. Later, the Jews were allowed to return but were forced to wear pointed hats. The was a period of cultural decay due to the poor rulership of the archbishops and poor conditions in the empire during the reign of Frederick IV.

Conditions were at their worst during the reign of Bernard II of Rohr. The country was in depression, local authorities were raising their own taxes and the Turks were ravaging the archdiocese. In 1473, he summoned the first provincial diet in the history of the archbishopric, and eventually abdicated. It was only Leonard of Keutschach (reigned 1495–1519) who reversed the situation. He had all the s and town councillors (who were levying unfair taxes) arrested simultaneously and imprisoned in the castle. His last years were spent in bitter struggle against Matthäus Lang of Wellenburg, Bishop of Gurk, who succeeded him in 1519.

Matthäus Lang was largely unnoticed in official circles, although his influence was felt throughout the archbishopric. He brought in Saxon miners, which brought with them Protestant books and teachings. He then attempted to keep the populace Catholic, and during the was besieged in the , declared a "monster" by , and two later uprisings by the peasants lead to suffering to the entire archdiocese. Later bishops were wiser in the ruling and spared Salzburg the religious wars and devastations seen elsewhere in . Archbishop gave the Protestants the choice of either to live Catholic or leave. The Cathedral was rebuilt in such splendour that it was unrivalled by all others north of the .

Archbishop led Salzburg to peace and prosperity during the in which the rest of Germany was thoroughly devastated. During the reign of Leopold Anthony of Firmian, Protestants emerged more vigorously than before. He invited the s to Salzburg and asked for help from the emperor, and finally ordered the Protestants to recant or emigrate - about 30,000 people left and settled in , and , and a few settled in Georgia in the . The last Prince-Archbishop, , is probably best well-known for his patronage of . His reforms of the church and education systems alienated him from the people.

In 1803, Salzburg was secularised as the for the former Grand Duke Ferdinand III of Tuscany (brother of ), who had lost his throne. In 1805 it came to Austria, and in 1809 to Bavaria, who closed the , banned monasteries from accepting novices, and banned pilgrimages and processions. The restored Salzburg to the milder Austrians in 1814, and ecclesiastical life was again normalised by Archbishop (reigned 1823-1835). The archdiocese was reestablished as the in 1818 without temporal power.

Bishops of Iuvavum (from 755, Salzburg)

See for archbishops since 1812.